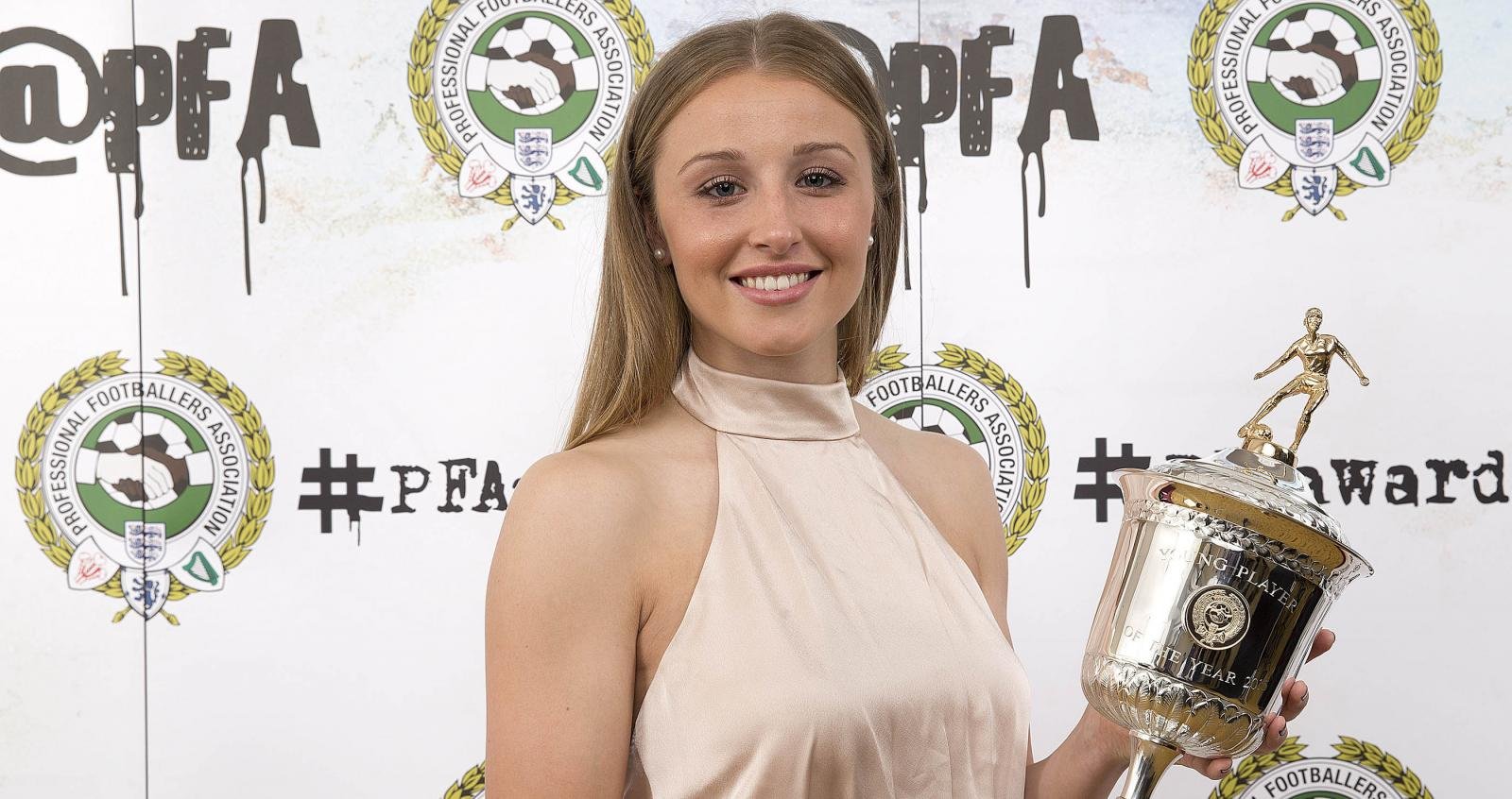 The women’s game has an immensely bright future following England’s bronze medal heroics at the 2015 FIFA Women’s World Cup in Canada earlier this summer, and Leah Williamson is one Lioness who is set to take centre stage.

The Arsenal Ladies midfielder has represented her country from Under-17 level, all the way through to the Under-23s, but the 18-year-old ace is already knocking on head coach Mark Sampson’s door for her first senior international call-up.

Williamson, who joined the Gunners’ Centre of Excellence when she was just nine-years-old, has become an instrumental part of the North London side’s bid to regain the Women’s Super League 1 title for the first time since 2012.

Having already lifted the FA Women’s Cup last year, Williamson, who followed up her achievements by signing a new long-term deal with the Gunners in July, is desperate to get her hands on some more silverware as Arsenal currently lie second in the WSL1 this season, level on points with leaders Sunderland.

Ahead of her club’s decisive run-in; Williamson spoke EXCLUSIVELY to Shoot about the defining moments of her career so far, Arsenal’s bid for a 41st major trophy, the future of women’s football and her own England ambition.

You have been at Arsenal Ladies for the entirety of your career, since joining the Centre of Excellence at the age of just nine-years-old. What is it about the club that you love so much?

“I think growing up as an Arsenal fan; and my whole family being Arsenal fans, it was important for me to play for them. It is obviously a fantastic club that does all the things the right way and it was something I wanted to be involved in.”

You made your senior debut for the Gunners in the Champions League last March, just a day after your 17th birthday. Can you recollect your emotions from that ground-breaking moment?

“To be honest with you, I just remember being very, very nervous at the thought of coming on. But I was really overwhelmed. Like I said; because all of my family support Arsenal and we have been there, it felt so good and I felt I was good enough to play as well.”

Just a few months later, you won your first major title with Arsenal, lifting the 2014 Women’s FA Cup, in which you came on as a second-half substitute. What was it like getting your hands on your first major piece of silverware?

“I think that is what dreams are literally made of. Everyone wants to win everything but winning the FA Cup, for me, was really special. Just to get to the final, after playing every game leading up to it, was pretty special, especially in front of a home crowd for me as it was in Milton Keynes, where I live. I think it was really important for me to get a taste of that as now I am hungry for more.”

Ahead of the 2015 Women’s Super League campaign, Arsenal rewarded you with your first professional contract at the club. This must have been something you dreamt about since joining the club from a young age?

“Yeah, definitely. As a woman footballer growing up, you don’t necessarily think that you could only become a professional footballer; it just doesn’t work like that, especially for me growing up, I didn’t see the game like that. But in the last couple of years; thanks to the way it has progressed and the way it is progressing now, it became realistic for me to sign with my childhood team and a team that I love. I am very, very privileged.”

Arsenal currently lie second in the WSL1, level on points with leaders Sunderland and one point ahead of third-placed Chelsea. Do you think the club has what it takes to snatch top spot and win your first Women’s Super League title since 2012?

“I think if you look at the start that we had last year in the first half of the season, we were maybe second from bottom, but we turned that around and we were well in the [title] race. So we nearly won it last year with such a poor start. I think we have been much more consistent this year and the performances are really coming together. When we play Chelsea, I think it will all be decided then. We are hoping that we aren’t going to slip up before then. So yeah; when we play Chelsea, we will see what the result is. But we have to be confident that we can win. Otherwise what is the point in competing?”

This is Pedro Martinez Losa’s first season in charge of the club. What impression has he made on the squad?

“I think, like anything with a new manager, he has brought new ideas. Some are from Spain so perhaps he also brought a different philosophy. He has brought in his own way of doing things and we will see how we can take to it and how it works for us.”

Do you feel the game’s recent growth, especially after England’s fantastic World Cup, has now got girls believing they can make a living out of the game – something that may not have been possible even three or four years ago?

“I think so. But I think there is still a long way to go. I think the initial foundations have been put in place now, so they have made a legacy. We have now just got to build on it because that really is the reality now. Hopefully if the game keeps progressing, there will be a living wage for most [female] professional footballers.”

What did you make of the Lionesses’ performances in Canada?

“I thought they were incredible. Like I said; I am a football fan first and foremost. I play the game, but I really love watching it as well. Anyone wants to see an England side doing well, especially with the fact that I know all the girls and the hype around it. It was incredible. Once they came back, the experiences they have had have been just unbelievable. They have made us the most successful team we can be and maybe we can win gold next time.”

You have represented England at all youth levels, playing for the Under-17s, Under-19s, Under-20s and Under-23s. What is it like to represent your country on the international stage?

“I think that is the ultimate goal. The ultimate reward for all your hard work, playing for Arsenal so that you can represent your country. Nothing tops it when you are singing that national anthem. You ask any footballer, it is just indescribable.”

QUICK-FIRE ROUND:
Best advice you have ever received: “You shouldn’t worry when a manager is having a go at you, but worry when they are ignoring you”. That’s when they don’t really care.
Favourite song: Sam Feldt – Show Me Love
Favourite pizza topping: I’m a very plain girl, ham.
If you weren’t a footballer, what would you be: The boring answer would probably be an accountant. But the interesting answer; I think I would be involved in music. Maybe a producer.
If you could choose three dinner guests, past or present, who would they be: Miranda Hart, Thierry Henry and David Walliams.