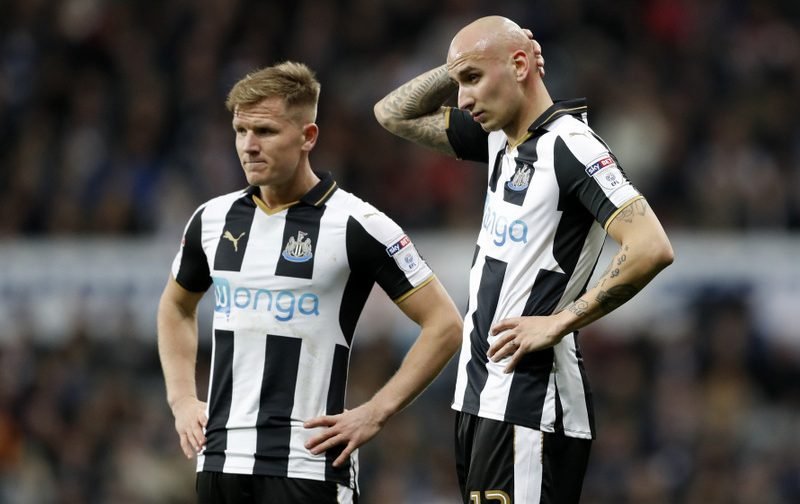 Newcastle United’s hopes of lifting the 2016-17 Championship title took a huge blow as Chris Wood scored his 25th league goal of the season in the 95th minute to salvage a last-gasp 1-1 draw for Leeds United at St James’ Park on Good Friday.

The 25-year-old, who now has 28 goals in all competitions this season, converted Kemar Roofe’s injury-time cross to rule out Jamaal Lascelles’ opener earlier in the second-half to earn The Whites a fairly undeserved share of the spoils.

The stalemate means Rafa Benitez’s Magpies have fallen four points adrift of league leaders Brighton and Hove Albion in the race for the Championship title after failing to hang onto all three points last night, just hours after The Seagulls defeated Wolverhampton Wanderers 2-0 at Molineux.

Despite Newcastle still being eight points clear of third placed Huddersfield Town; Toon Army fans vented their frustration at throwing away all three points in the dying embers of the match on Twitter, with some particular criticism being aimed at manager Benitez, plus players such as Lascelles, Jack Colback and Mohamed Diame…

@NUFC We sat back on a 1-0 lead, invited them on and that’s what happens. 18 corners to 0!! Attack is the best form of offence…

@NUFC #NUFC Diame & Colback decided to throw the game these ******
Absolute shocking when these 2 play !!!
I don’t wanna ever see them next season

@NUFC Never mind showing a pic of disappointed players, how about they learn how to take chances and finish a game off professionally #SameOldToon

@NUFC Massive 2 pts drop again. Can’t take put away chances and then switch off 5-10 mins before the end. Need to get a grip!!

@NUFC Title may be off the cards but positive signs tonight. Mitro and Anita Superb

@NUFC Leeds deserve absolutely nothing out of that, we should have had that game won ages ago