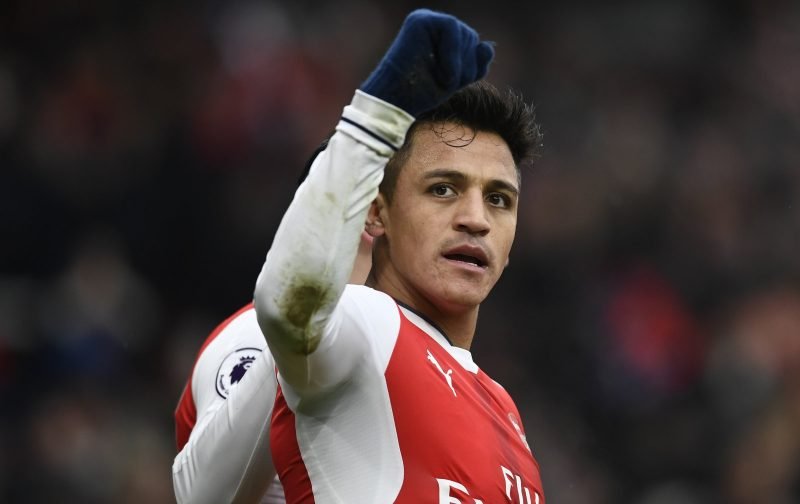 Premier League giants Arsenal will hold out for £50 million for the services of star man Alexis Sanchez this summer, according to The Evening Standard.

The Chilean international has just over a year left on his contract at the Emirates, and the longer it goes on without being extended, the more likely he is to leave North London this summer.

Chelsea, Manchester City, Juventus, and Manchester United are all reportedly keeping tabs on the 28-year-old’s situation, but it looks like the quartet will have to stump up £50 million if they are to land Sanchez, who has scored 47 goals in 92 Premier League games for the Gunners.

The forward has been in scintillating form for Arsene Wenger’s side this term, netting 18 goals and laying on nine assists in 27 Premier League appearances, and with three goals in their ill-fated Champions League campaign, he has been their go-to man for much of the season.

However, Sanchez has visibly been getting increasingly frustrated at Arsenal since the turn of the year, which reportedly culminated in a training ground row a few weeks ago, something manager Wenger vehemently denies, but did see the 28-year-old dropped from the line-up to face Liverpool.

With Wenger’s future yet to be agreed, there is much uncertainty around the Emirates at present, and that is something the likes of Antonio Conte, Jose Mourinho, and Pep Guardiola could use to their advantage, with reports surfacing that Sanchez is now the former’s number one target this summer.

Not only is it troubling times on the pitch for Gunners fans – their side are six points behind Liverpool in fourth – but it is off it as well, and it could be a very long summer if Sanchez doesn’t show any signs of committing to the club between now and May.