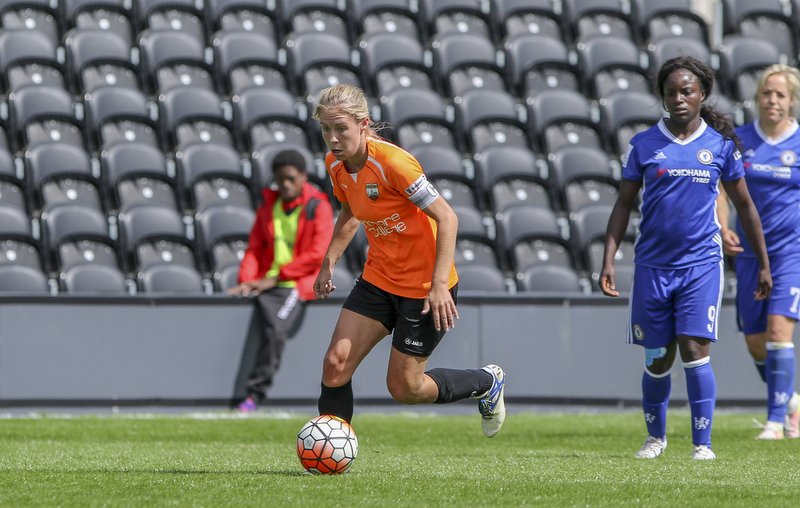 London Bees captain Ashleigh Goddard is ready to pull her boots back on when her side take on newly promoted Brighton and Hove Albion this weekend.

It’s a new-look Bees squad, with plenty of fresh faces signing for the 2017 Spring Series, including England Under-19 star Lucy Loomes.

“We’ve had quite a lot of new additions, tried to improve our squad and give it more depth,” the skipper explained.

“There’s a lot more competition for places, which is giving us different options. It’s looking good so far.”

Bees finished seventh at the end of the 2016 Women’s Super League 2 campaign, and Goddard is hopeful that they can become a force to be reckoned with.

She adds that the 2017-18 season is likely to be the team’s main focus, but that does not mean they are not taking the round-robin Spring Series seriously.

“I want to win every single game – I think it’s still going to be very competitive,” she added.

With the legendary Doncaster Belles relegated into WSL2, and Everton just missing out on promotion, there are still some famous names in the second-tier, which Goddard sees as a challenge and a plus-point for the league as a whole

She said, “It’s nice to have big-name teams in our league, grab a bit more of the media – it’s all very exciting.”

Goddard’s team struggled mostly with consistency last year; they played some excellent football, but they were let down by their finishing and their ability to hold on to a lead for 90 minutes.

She also points out that they were stricken with injuries, which they struggled to cope with in a minimal squad, but 2017 should be different.

“We’re in a better position to be more consistent,” she promised.