Behind the scenes with BT Sport 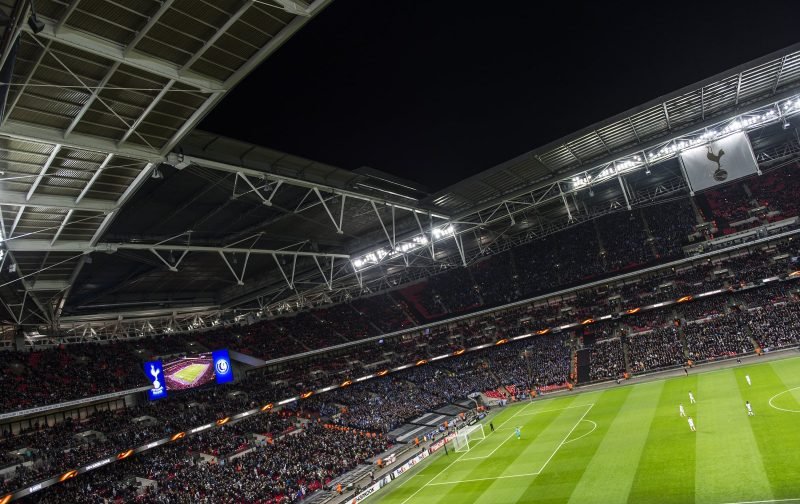 Arsenal are back in Premier League action this weekend when they travel to face Liverpool, live on BT Sport. Ahead of the game, we went behind the scenes with the broadcasters to find out just how they get the biggest games onto our screens.

Shoot! chose to have a snoop around behind the scenes of Tottenham’s Europa League round of 32 clash with Belgian side Gent, to find out just what it takes to bring the action from the stadium to our living rooms.

Making our way into the national stadium via the less than glamorous service entrance, where the big name pundits all sneak in ahead of the coverage, we are lead down to the first of two whopping production trucks.

The first we visit is the Match Truck, where all the live action is sent to a satellite and then to our screens, and huddled in the van is everyone responsible for what you see during the game, from the match itself, to replays and sound. 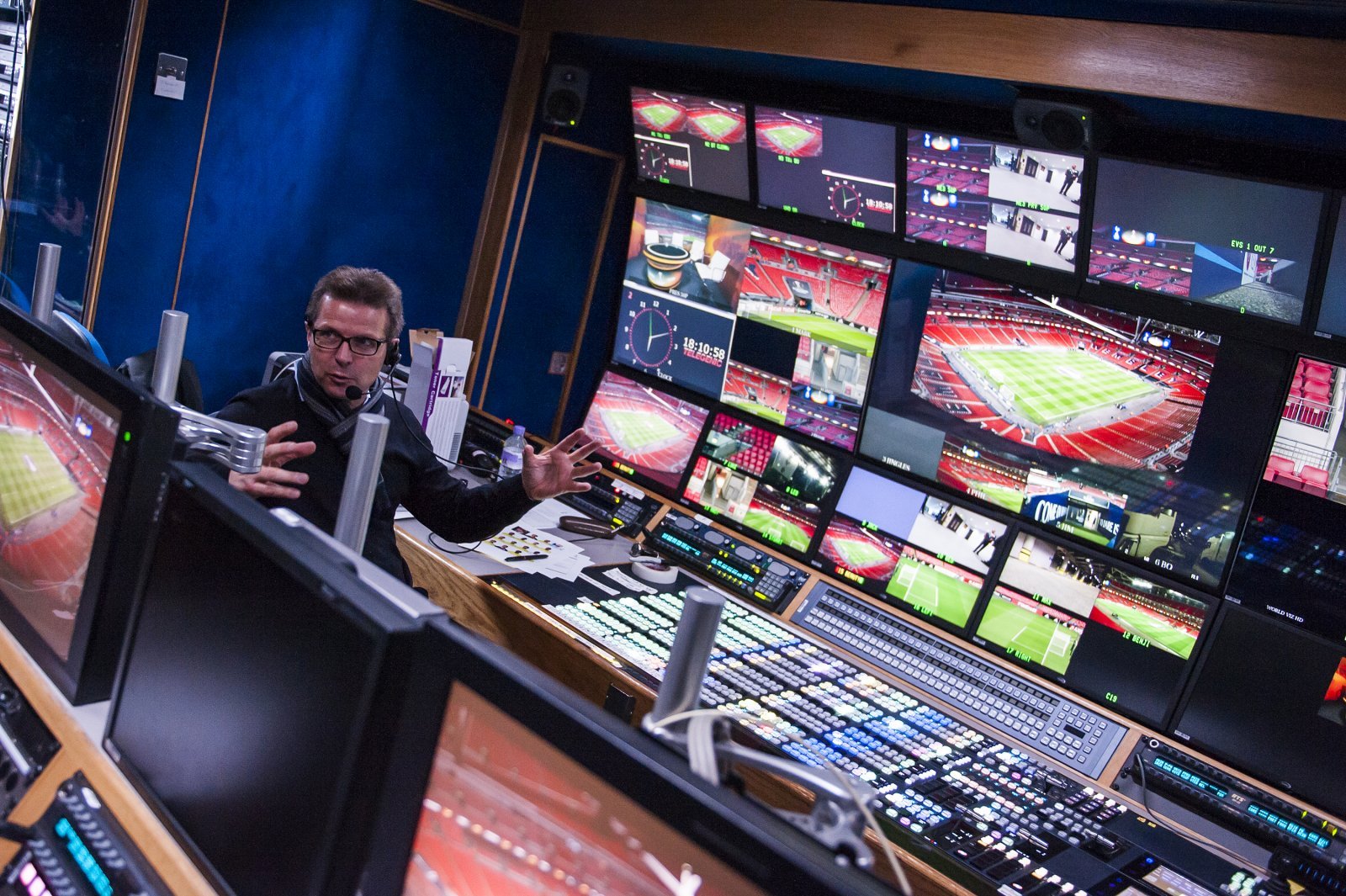 Shoot! are talked through what it takes to bring live action to the TV Screen.

For the Spurs game, we’re told, there are seventeen different live cameras feeding into the truck from inside the ground, any of which can be selected at the touch of a button, if you can work out which one does what, that is. Add to that another four screens on which replays are constantly being thrown up and that’s quite the decision resting on one set of shoulders.

For any live Premier League game, such as Liverpool’s clash with Arsene Wenger’s side on Saturday evening, there could be anything from twelve to twenty cameras on the switch board. For the biggest games, however, you could be sat with forty different angles at your disposal.

Having left the Match Truck, we poke our heads around the corner of the Presentation Truck, or Pres Truck as it’s known, next door, where Senior Producer Stephen Booth is busy getting everything ready for presenter Jake Humphrey and his three pundits on the day, Harry Redknapp, Glenn Hoddle and Jermaine Jenas.

Here there are a further three live cameras and a whole host of pre-match packages waiting to go on air, controlled by Stephen and his team, who are all hoping we don’t have to go to extra time. Once the live coverage is completed, they’ll be onto the highlights show from all the other games around Europe that night, meaning it could be a late one indeed. 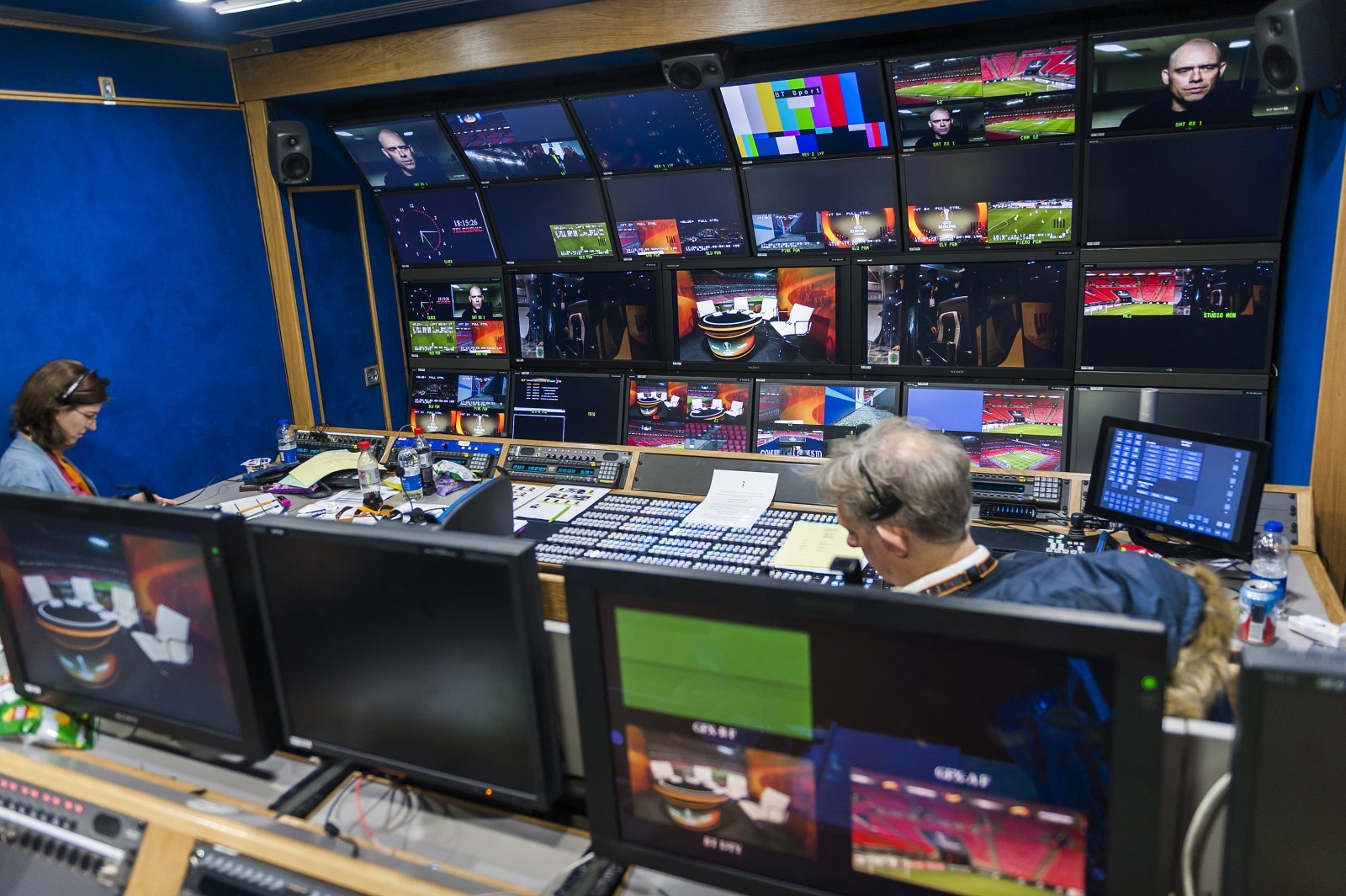 The Pres Truck is where everything from the studio is managed and sent to screen.

Hidden amongst the maze of wires and outside broadcast trucks in the bowels of Wembley Stadium is something which looks quite out of place. “This is the Winnebago” says Head of Live Events, Gary Franses, who is leading the tour, as we walk up to what looks a rather basic caravan at the heart of the TV compound.

“This is our on the road green room, if you like,” adds Gary as he opens the door.

As we head in up the steps, we’re welcomed by today’s pundits and commentators. Sat alongside Redknapp, Hoddle and Jenas are commentator Darren Fletcher and former Spurs striker, Clive Allen.

We’ve arrived at just the wrong time and, with Harry sat comfortably as if he was in his own living room, they are all about to have their pre-match meal of pie and chips with a side of baked beans.

“As you can see, the nutrition is of the highest standard,” jokes Hoddle. 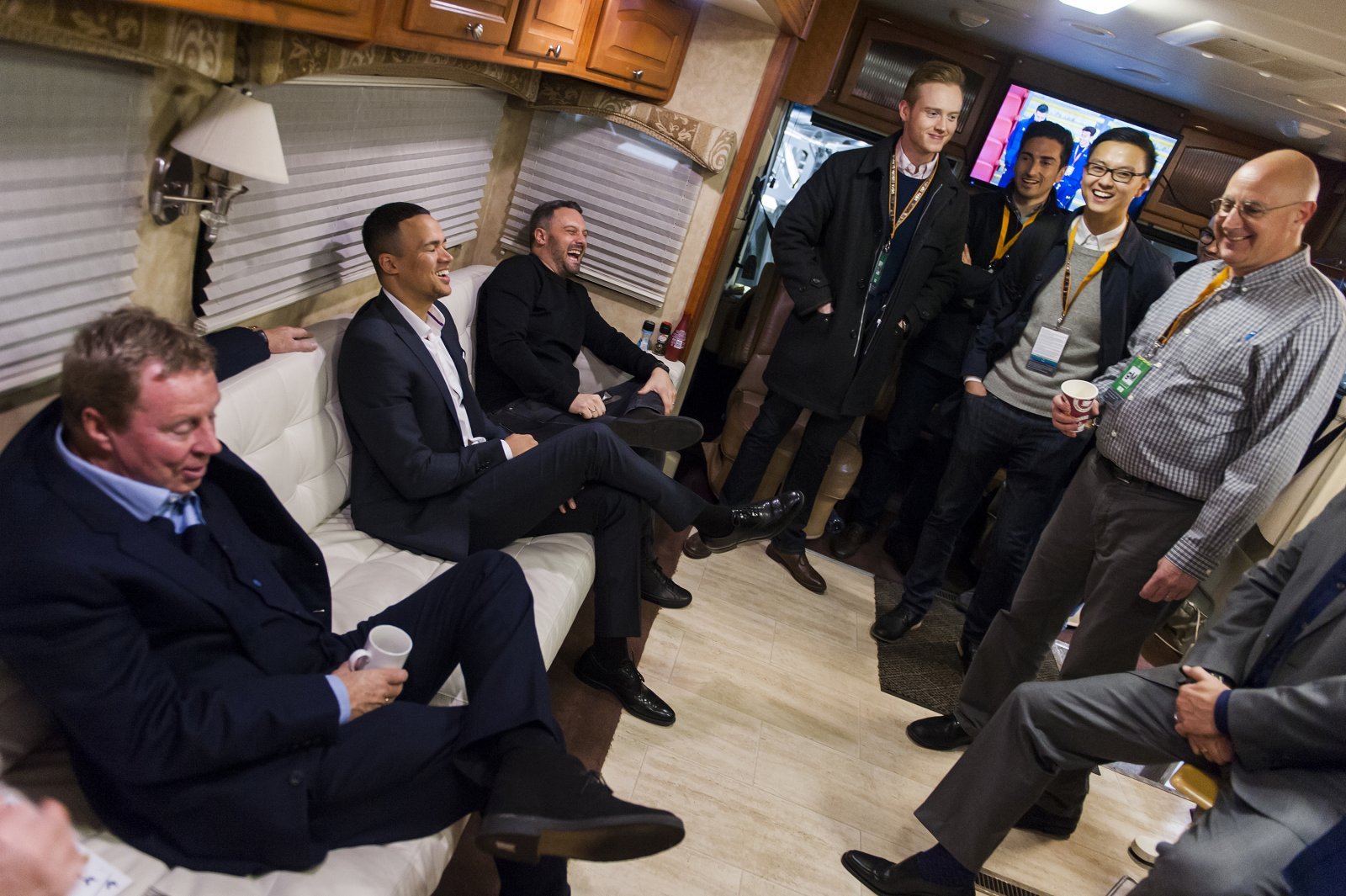 The pundits and commentators get comfy in the Winnebago ahead of the game.

As BT Sport’s main man, Jake Humphrey, emerges from the front of the ‘green room’ to head up to the studio, we follow suit and leave the pundits to their slap-up dinner.

We head up four floors from the basement to the cramped studio where Jake is now preparing his pre-match notes. “We were supposed to be doing this pitch-side, but Storm Doris has got in the way,” he admits. 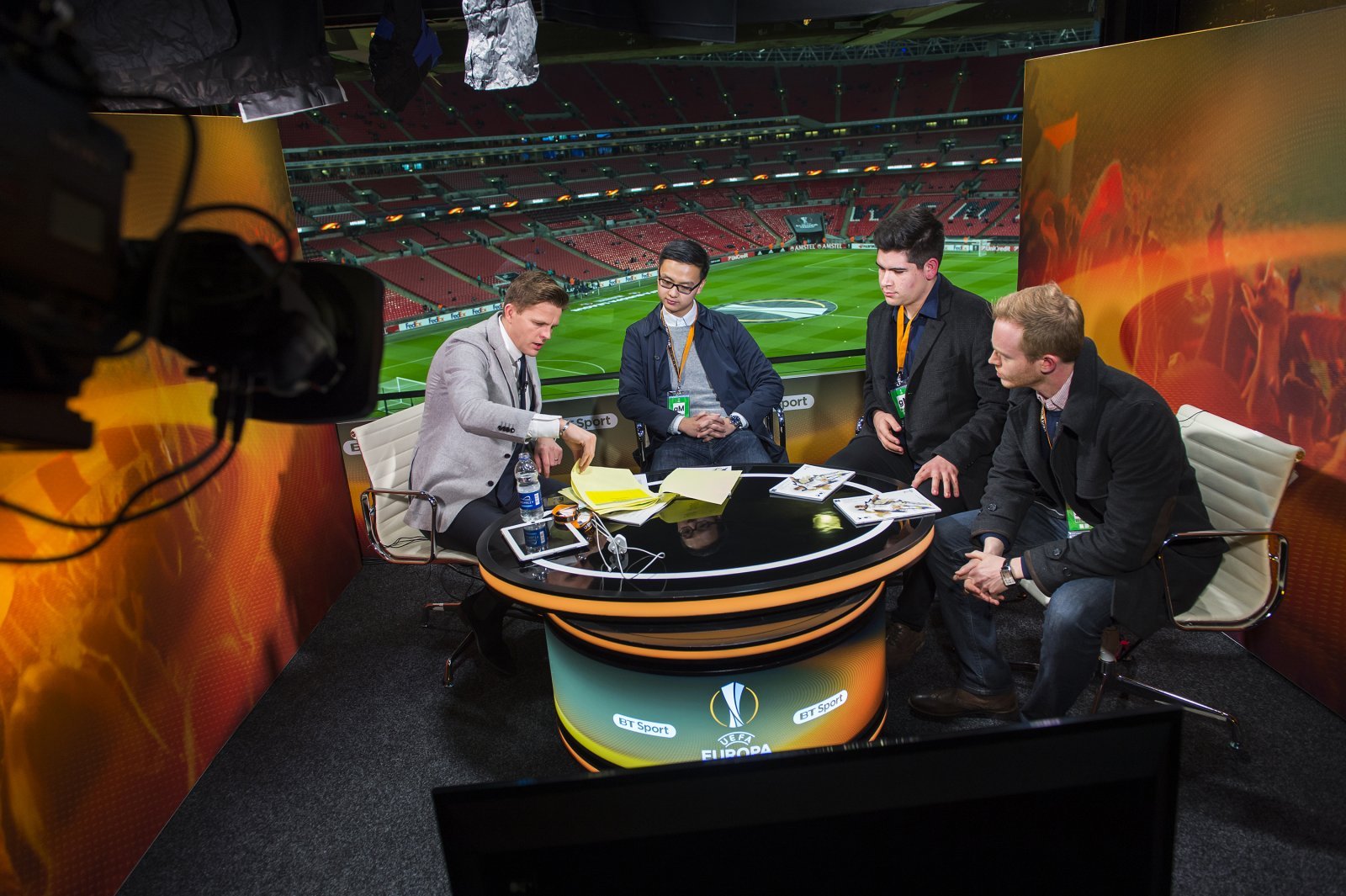 Humphrey, who found his feet in presenting on children’s TV, before moving to Formula One and now football, will still present the show as if he was pitch-side, with no script or auto cue.

“It’s a lot harder without a prompt,” says Jake, “but it’s so much more reactive, you can have a real chat with these guys [the pundits].”

Having left the studio, we head to sit down and watch the game, which ends in disappointment for Mauricio Pochettino as his side are knocked out of Europe, along with the eighty-odd thousand spectators in attendance, completely unaware of the huge team working tirelessly to beam the game across the globe below them.