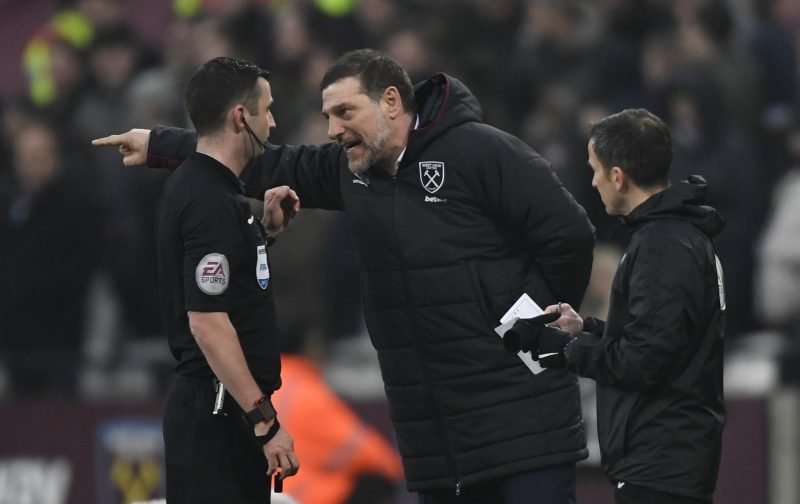 Jonny Evans headed home Chris Brunt’s corner in added time to secure a point for Tony Pulis’ men, with goals from Sofiane Feghouli and Manuel Lanzini looking to have clinched the victory for the Hammers.

Nacer Chadli had given the visitors the lead in East London, although what happened before that goal was one of the many decisions that Bilic felt went against his side, with James Morrison not adjudged to have fouled Feghouli in the build-up.

Feghouli also had a goal dubiously ruled out for offside in the first half, while there were strong penalty shouts after both Robert Snodgrass and Jonathan Calleri were bundled over in the area either side of half-time.

Unsurprisingly, the Hammers boss, who was sent off following the Baggies’ late leveller after launching a microphone, was far from impressed with referee Michael Oliver’s performance.

He said: ‘It was a great game. I’m proud of my team but also very, very angry about the decisions.

‘I really rate this referee very highly, but there were too many mistakes for one game. There were four or five decisions, and all of them went totally against us.

‘Their goal, with their player, he didn’t touch the ball, it was Feghouli who touched the ball. The guy’s from behind. For me, it’s a foul.

‘Then our disallowed goal, they ruled it out because of offside, but it wasn’t offside. A couple of penalties, not big ones, but those decisions counted for them also.

‘It’s way too much for one game, to be on the wrong end of every decision.’