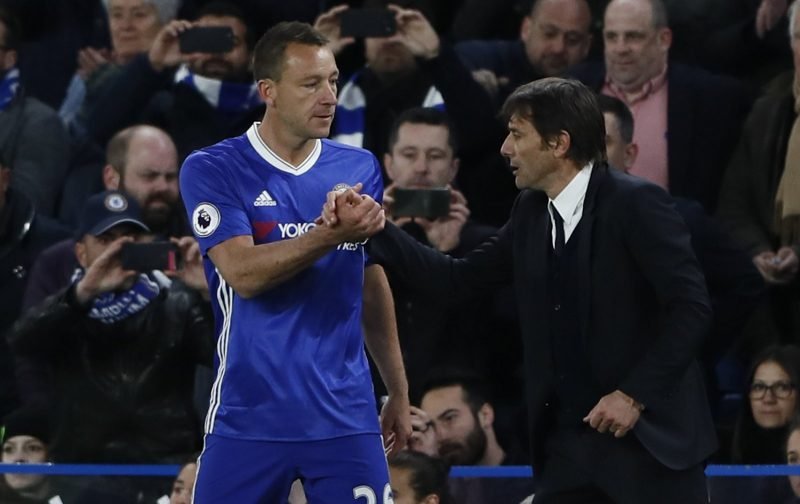 Premier League outfit Bournemouth are willing to extend John Terry’s playing career by offering him a contract this summer, although they may face competition from Swansea, according to The Daily Mail.

The 36-year-old confirmed a few weeks ago that this season will be his last at champions Chelsea, which will bring to an end at stellar Blues career which has seen him play 717 times for the club, winning five Premier League titles, five FA Cups, and the Champions League back in 2012.

Yet it remains to be seen exactly where Terry will end up, or whether he will retire from playing altogether, although Eddie Howe’s Bournemouth and Paul Clement’s Swansea are reportedly eyeing up a move for the former England captain should he decide against retirement.

The Daily Mail reports that the Cherries will offer Terry a two-year deal to move to the Vitality Stadium, with Howe looking at how he can strengthen his defensive options ahead of their third season in the top-flight, while The Daily Express report that Clement’s Swans are also interested in bringing the centre-back to the Liberty Stadium.

Manager Clement, who spent time at Stamford Bridge as a coach between 2007 and 2011, said: ‘The fact is, I know John, he is a top player and a free agent.

‘So it would only be sensible to have a discussion with him to see if he would be interested.’

This news is sure to excite both Bournemouth and Swansea fans ahead of their respective Premier League campaigns next term, with both sides looking to move to the next level in the 2017/18 season.

However, they still have one game left to play of this season, with Howe’s Cherries travelling to Leicester, and Clement’s Swans hosting West Brom, both on Sunday.

Terry will also bring the curtain down on his wonderful Chelsea career at home to Sunderland on Sunday, where the Blues will be awarded the Premier League trophy.