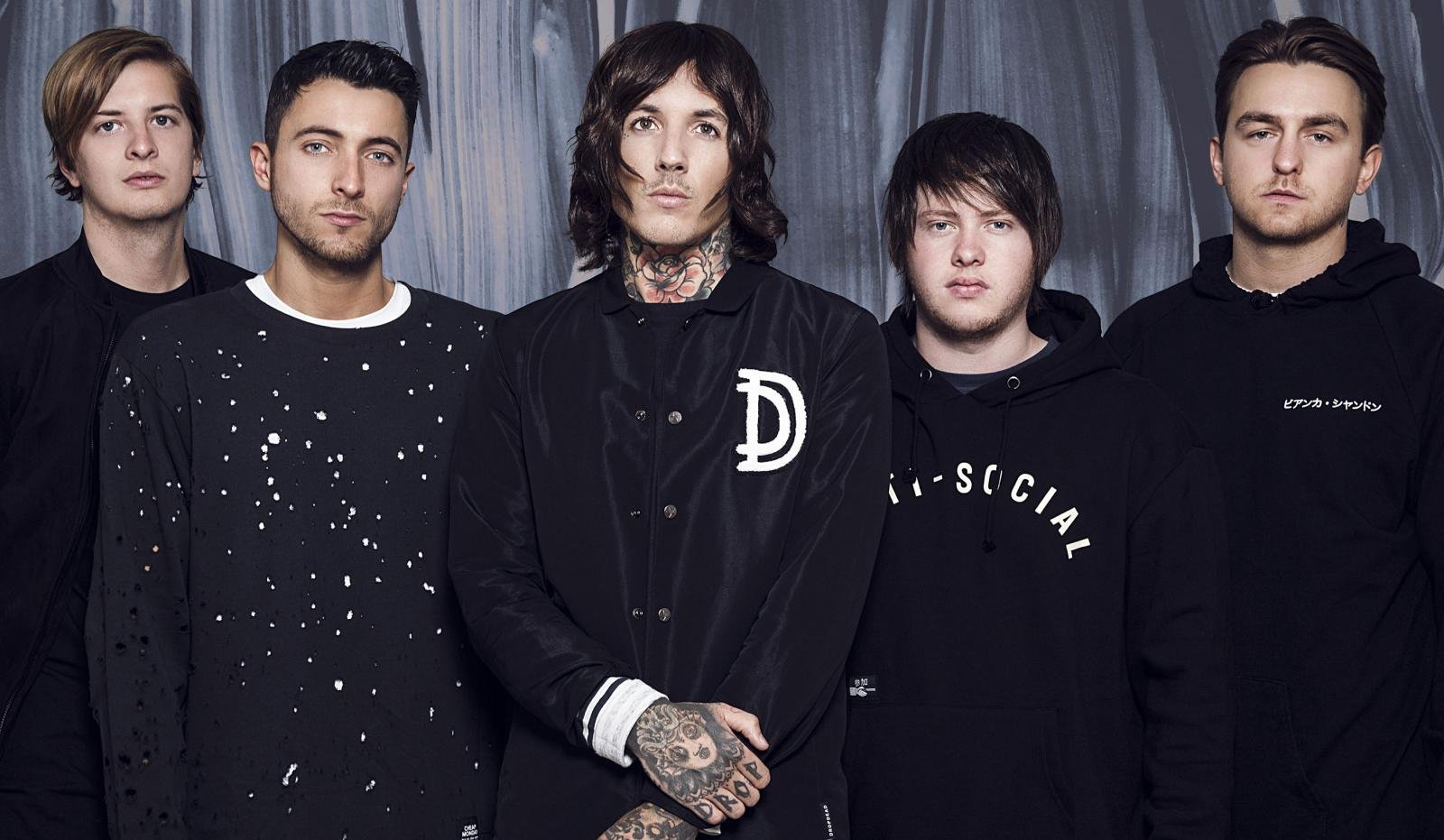 Fresh from directly supporting Metallica at Reading and Leeds, these are exciting times for Bring Me the Horizon. The Sheffield-based rockers release their fifth studio album, ‘That’s the Spirit’, this Friday (11th September) and are about to embark on a tour of America and Europe, including four UK dates at the end of November.

The band’s name was inspired by the final line from ‘Pirates of the Caribbean: The Black Pearl’, when Jack Sparrow says: “Now, bring me that horizon.” Their last album, Sempiternal, was released in July 2013 and reached no.3 in the UK album chart in it’s first week of release as well as no.11 on the US Billboard Chart with over 27,000 first-week sales. It was named the best album of 2013 by Kerrang magazine, and since then the band have gone from strength to strength.

We caught up with drummer Matt Nicholls to talk about the recent success of the band, his love of Rotherham United and how Shaun Goater made an impact on and off the field in his time at the Millers.

Your fifth studio album, ‘That’s the Spirit’, is released on Friday. What can we expect from the new release?

“As always with a new record from us, you can expect something a bit different from what we did last time. We started the band when we were 17 years old, I’m 29 now – times change. When we were kids we just wanted to do metal and do it as heavy as possible, but as we’ve got older our music has changed and we’re all about progression.

“I don’t think we’re one of those bands that can keep on doing the same thing – a lot of bands get the fan base and just want to keep them happy as bands get scared to lose the fans. With us, as a band we like to progress and better ourselves and keep writing better music than anything we’ve done before. We try and better ourselves with each record.”

You’ve just directly supported Metallica at Reading and Leeds – where does that rank amongst the band’s highlights?

“It probably is the highlight, to be honest. I used to go to love going to Leeds Fest when I was a kid – I first went when I was about 13 with my brother and some mates, so Leeds festival is just massive anyway as it’s got so much history for us.

“We’ve played it a few times now and it’s always been amazing, but this time with us being second to the headliners was pretty ridiculous. It’s a great achievement.”

Last year you headlined Wembley Arena – it’s every boy’s dream to play at Wembley as a footballer or a rockstar, can you sum up that experience?

“It was amazing, such a great milestone for the band. It took us ten years to get there, so it was like a party and a celebration of everything we’ve been through.

“It was unreal, to be honest, it was Wembley – just the word Wembley is massive in British culture. It was a great feeling and I’m very proud of it.”

You’re a Rotherham fan  – what are your earliest memories of watching the club?

“I used to go with my Dad through the super old turnstiles at Millmoor – Dad used to lift me and my brother over the turnstiles so we got in for free – and I remember the days of being at the back at the old Tivoli End with my Dad.

“One time, I think when I was about ten years old, me and my Dad did a penalty competition on the pitch – I had to shoot against our old mascot, Dusty Miller, and Dad was against the reserve ‘keeper, and we won! I’ve got this sick photo of me and my Dad with Dusty Miller and I’ve still got the signed Rotherham ball – it’s really old, I don’t know who any of the players are but it’s still in my house.”

Rotherham manager Steve Evans is a controversial figure – what do you make of him?

“I like the guy. At first when I heard through my brother that he’d got the job, I thought what’s going on here, what are people going to think about this? He’s a very outspoken dude, and I like him – he’s been good for the club and done all he can on a small budget. We’re not a rich club by any means, we’re just little Rotherham at the end of the day.

“I think him and the chairman deserve a big pat on the back – two consecutive promotions, the win at Wembley, and just staying in the Championship last year was bigger than the Wembley victory in my opinion. Rotherham fans can’t get too ambitious; a lot of people are saying we’ve got to get mid-table – I just think we’re not going to finish anywhere near mid-table, we’re going to be near the bottom. Just to stay up last year was, for us, a massive achievement. You can’t argue with Evans’ record and he’s a character – I like him.”

This season is expected to be a struggle, with Rotherham tipped for the drop – what are your expectations for the campaign?

“Same as last year, I think – it’s going to be hard. The difference in quality from League One to Championship football is big; I remember the first game we played last season against Wolves, who came up with us from League One. Just playing Wolves on the first day of the season was hard – we won, we scraped it 1-0 somehow, but I remember watching it and thinking this is hard, it was so much faster. We were playing teams like Nottingham Forest, just mental teams, and it was so good to be in amongst them – it makes away days fun.

“I don’t know about this year – I think we just need to do our best to stay up, that’s all. We can’t expect any more than that, but at the minute it’s not looking too good (at the time of the interview, Rotherham sit bottom of the Championship with one point from five games.) Hopefully we can turn it round and get some points before it’s too late.”

What is your best memory of supporting Rotherham United?

“The penalty shoot-out on the pitch with my Dad was a good one – just the fact it’s me, my Dad and my brother that go together, it’s always good. My parents divorced when I was younger and I didn’t live with my Dad so I didn’t see much of him, so going to the football with my Dad has been massive – I enjoy the fact that I go with my family.

“The last few years have just been amazing, from where the club were a while back – in administration, we didn’t even know if we were going to have a club, we were playing at Don Valley, we didn’t have a stadium and we didn’t know what was going on with the club. To come out of that with a brand new stadium and a chairman that is doing all he can to help us be successful is great. The past few years with back-to-back promotions and playing in the Championship has just been amazing, to be honest – I can’t complain about it. Coming out of the darkness of Don Valley and administration to promotions and Championship football is a wicked achievement for a top club.”

“The dark days of Don Valley – that was hard work. It’s just a massive athletics stadium, it’s not even there any more. It’s got a running track round it, there was no atmosphere and it was horrible going there.”

On the topic of the new stadium, it’s been three years since the club moved into a new home, the New York Stadium – are you a fan of the new ground or do you miss Millmoor?

“I guess I do miss Millmoor, it’s got a lot of history and tradition. When I was a kid it was a case of Rotherham United is Millmoor.

“I think the club is moving in the right direction, although it’s still going to be hard for us financially – like I’ve said, we’re just little Rotherham at the end of the day. But I really like the new stadium – I’m a season ticket holder even though I hardly get to any games because we’re always on tour. I love going there, it’s a great place to watch football and the atmosphere is always good – I think I’m at my happiest when I’m watching Rotherham at the New York.”

Can you give us your top five Rotherham players from your time supporting the club?

“Ronnie Moore has to be the top one – he’s a club legend and was playing when I was a kid – he’s getting on a bit now but he’s still a legend. Paul Warne is another, he was a classic player and coaches at the club now. Recently there’s been some big players – Kari Arnason was a really good player who always looked so chilled on the ball. He went to Malmo this summer but he was a really big player for us. Same with Ben Pringle recently but he’s just left as well, he’s gone to Fulham. He was a massive player for the club and was a big character – I think we’ll miss him on the left hand side.

“For the fifth player, I’m going to go with the classic Tony Towner. In fact, no I’m not – Shaun Goater. My Mum used to tell me this story about how she was in a nightclub in Rotherham one time and this guy starts chatting her up, and apparently it was Shaun Goater – my Dad was stoked.”

Who’s your favourite current player and why?

“I like the young lad Jonson Clarke-Harris, he’s got potential and is the club record signing – he was only £450,000 but for Rotherham that’s pretty big. At the minute he’s looking like he’s got a lot of potential.”

“I also like Lee Frecklington, who has just been named captain. He’s the only player that’s still with us from League Two, so I’m going to go with Frecklington.”

Is there much football chat between you and your band mates?

“A few of us chat about it – our bass player (Matt Kean) is a big Man City fan. The rest of the boys don’t really support anyone – they like to watch football though and we’re going to the England game (vs Switzerland) at Wembley tonight. We play a lot of Fifa, but the main football fans are me and Matt.”