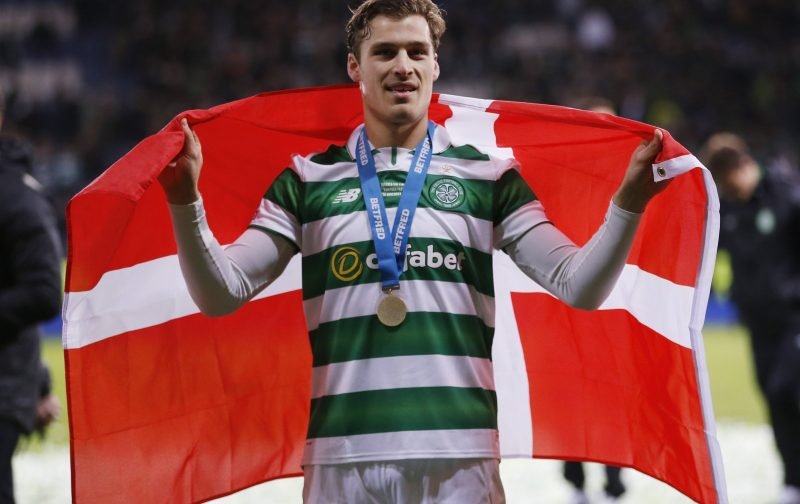 Erik Sviatchenko has admitted Celtic should give up on football if they don’t win the Scottish title this season according to reports in the Daily Record.

Celtic are currently 27 points clear at the top of the Premiership but the Danish international insists the team still have a lot to play for as they look to maintain momentum and prepare for next season’s inevitable Champions League campaign.

“I never get tired of winning. Although we have had a lot of winning games, we have had to work hard for them and, regardless of what people think, they don’t happen by themselves.

“We are the favourites in every game, but it can be hard. For example, St Johnstone were 2-1 up on us the other week.

“We have to keep going at the highest level if we want to continue our winning streak.

“Here in Scotland, our opponents play aggressive football and are good at organising themselves against us.

“There are no matches that are a walkover – often we just win by one goal.

“We are a flagship for Scottish football at the moment, but teams like Rangers, Aberdeen and Hearts make it a good league as well and it is exciting to be part of it for me. We have respect for our opponents.

“Although we should all probably stop playing football if we don’t win the championship this season!”

The Hoops are currently enjoying a remarkable start to the season which has seen them go 30 games unbeaten in all competitions but as Sviatchenko has reiterated the players aren’t about to start taking things easy as Celtic march towards not just a title, but also a chance at history.  Despite their impressive unbeaten run, Brendan Rodgers’ side still have some way to go to break the record the all-time Scottish record of 36 games without defeat which was set between 1915-17 giving everyone an idea of just how monumental this campaign has been.