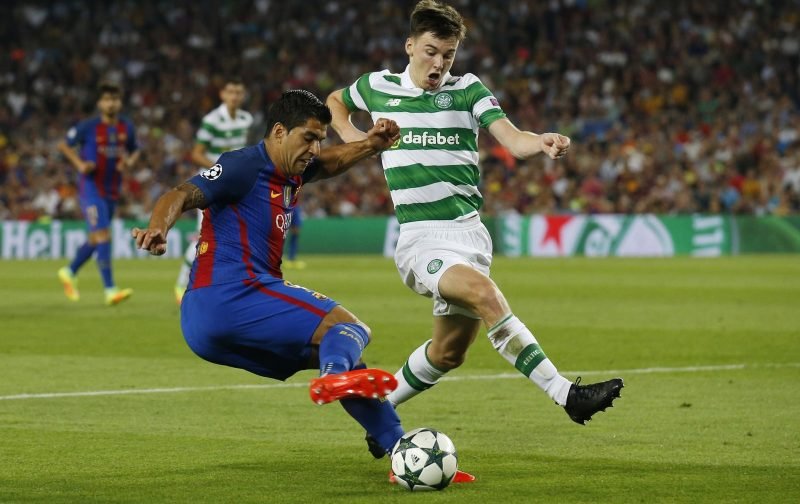 It’s been something of an annus mirabilis for Celtic this season as the Hoops have completely dominated the Scottish Premiership and seen some of their players perform so well they’ve been coveted by the cream of Europe.

One such player is Kieran Tierney, the left back who’s been an impressive part of Celtic’s season and bounced back from an ankle injury in October that kept him out for two months.

Manchester United have been linked with the 20 year-old  who’s already established himself as one of the top defenders in Scotland but there’s every indication that the Reds interest has cooled somewhat as Jose Mourinho looks for someone with a bit more experience.

Mourinho has made no secret of the fact he’s not happy with Luke Shaw’s performances at the United and signing Tierney would make sense but the Reds’ manager isn’t known for buying youngsters, especially ones who are unproven in the Premier League.

Whether Tierney remains at Parkhead is still uncertain but plenty of Celtic fans have taken to social media to share their views:

@DR_Celtic Good, Jose can jog on KT needs to stay here long term. Next captain in my eyes.

@Record_Sport Doesn’t dive enough ? Or harass the ref for no reason just to break up momentum ? Jose don’t like them too honest !

@kierantierney1 Jimmy Johnstone!! Tommy Burns!! kieran you could be one of the true legends of the club!! Don’t ever leave bro!!

@btsportscore @chris_sutton73 @ManCity Tierney is unbelievable, great going forward and a brilliant defender. He would walk into most teams. Can’t see him leaving celtic tho ☺

@MufcinNews Well they spent more than 25 million for a tree in Fellaini, I think they can dish out their pockets for Tierney, best LB in the country.

@Record_Sport Utter crappie “exclusive” don’t make me laugh. KT is going nowhere stop trying your paper is dying do us all a favour and let it go