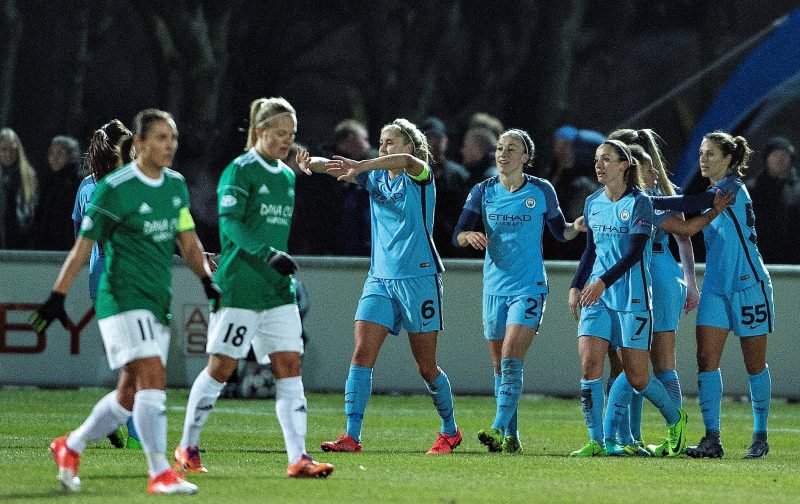 Manchester City are through to their first ever Women’s Champions League semi-final after Lucy Bronze’s header secured them a 1-0 win over Fortuna Hjorring at the Academy Stadium on Thursday.

The Women’s Super League champions already had a 1-0 aggregate lead following last week’s first leg, and they will now face Champions League holders Lyon in the semi-final after Bronze’s effort four minutes before half time secured the win for Nick Cushing’s side.

It means that City will face the defending champions in the last four, with both ties set to be played at the end of April.

And it’s fair to say that everyone at the club were absolutely thrilled with Thursday’s win, and are already looking ahead to pitting their wits against the French side.

‘Everyone’s delighted,’ captain Steph Houghton told the club’s official website immediately after the match. ‘Of course, we want to be in this competition.’

‘It’s the first time we have been and we’re in the semi-finals. You can see what it means.

‘We’re excited to move on to the semi-finals. Lyon are experienced and they have world-class individuals but so have we. It’s going to be an exciting game for sure.

‘We’re up for the challenge and we really believe in this football club.’

City are the first English side to reach the semi-final stage since Birmingham City in 2014, and coach Cushing is hopeful that they will acquit themselves well, adding that they feel no pressure.

‘We’ve been unbeaten now for 21 months [in all competitions except the Women’s FA Cup] so we can draw on those good performances and try and play like that against Lyon.’

However, before then, Cushing’s side face an FA Cup semi-final clash against Liverpool on April 17, before starting their WSL Spring Series at home to Chelsea six days later.