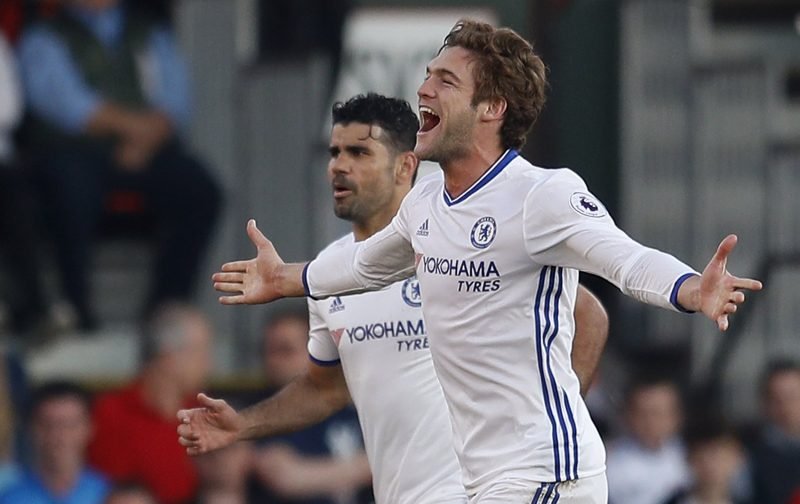 Premier League leaders Chelsea responded to Tottenham’s battering of Watford with a convincing 3-1 victory over Bournemouth on Saturday evening.

Antonio Conte’s men saw their lead at the top cut to four points following Spurs’ 4-0 success earlier in the day, but an Adam Smith own goal and an Eden Hazard strike within three minutes of each other set them on their way to another three points.

Eddie Howe’s Cherries got one back through Josh King’s 11th goal of the campaign, only to see the Blues restore their two-goal advantage midway through the second half courtesy of Marcos Alonso’s sensational free-kick.

And it was the third goal that got several Chelsea supporters talking on Twitter after the game, with Spaniard Alonso’s fifth goal of the campaign an absolute beauty.

The 26-year-old stepped up from 25 yards out and struck an unstoppable free-kick into Artur Boruc’s top corner, leaving the Polish shot-stopper stranded as Conte’s men secured the win.

And, as aforementioned, many Blues fans took to Twitter to express their delight at Alonso’s free-kick, some even labelled it ‘world-class’…

@ChelseaFC Stunning almost seems like an understatement for that beauty #BOUCHE

@ChelseaFC What a goal!!! #CFC

@marcosalonso03 @ChelseaFC . Your stunning beautiful goal simply out of this world !