Chelsea Football Club: From ‘The Pensioners’ to ‘The Blues’ 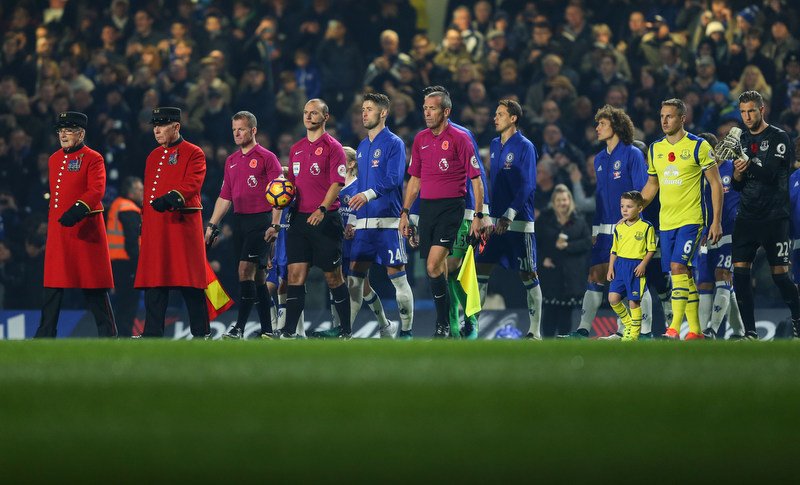 The Chelsea Pensioners were at the Bridge two weeks ago to lead the team out onto the pitch, and stood alongside the players during an impeccable minute of silence honouring those who have served.

Chelsea have always greatly maintained a close association with the former members of the British Army, commonly known as the Chelsea Pensioners due to their retirement home: the nearby Royal Hospital Chelsea.

In fact, Chelsea’s first nickname was The Pensioners, and for a time, the club crest featured an illustrated pensioner.

The nickname was dropped in the 1950s under the instructions of Ted Drake, former Chelsea star-turned-manager, and Chelsea became known as ‘The Blues’ from then on.

Though only obviously present at the Everton match, Chelsea’s relationship with the Pensioners is such that they regularly attend games at Stamford Bridge: the residents are given several free tickets for every home fixture, for which there is so much competition among these loyal pensioners that they must hold a lottery every fortnight.

When Chelsea won the Premier League in 2005, and again in 2010, the Pensioners formed a guard of honour as the players came out for the trophy presentation. In tribute to the iconic scarlet coats they wear, Chelsea’s kit for the 2010-11 season featured a red trim on the collar.

Chelsea’s link to British soldiers is not exclusive to their connection with the Pensioners; the club can recount a rich history deeply intertwined with World War I. Less than a decade old when the Great War broke out, Chelsea had already become a significant part of the neighbourhood, and remained as such during the course of the conflict.

The club held recruitment drives at matches and collected money for ‘Footballs for Tommies,’ allowing them to send 50 footballs in November 1914 to fans who had enlisted, one of which may even have been used in the legendary Christmas truce match a month later. Many who joined up sought to form companies of Chelsea fans within their battalions.

The August 1914 declaration of war coincided with the start of the 1914-1915 football season, and as Lord Kitchener, the Secretary of State for War, pushed for new recruits, the Football League came under pressure to abandon their regular schedule so that both fans and players could ‘play the greater game.’ Several clubs pushed for professional football to continue, arguing that the game is a professional business, with livelihoods, profit and shareholdings at stake, and that it was good for morale.

Indeed, there is no better proof of the latter than in the Chelsea FC Chronicle’s weekly published letters demanding news of the team’s progress, or for match-day programmes to be sent to the front.

However, the public did not share these opinions, and subsequently turned against footballers. With pressure from Parliament and the media demanding they enlist, Fulham MP and Arsenal director William Joynson Hicks formed the 17th Football Battalion of the Middlesex Regiment as part of the ‘pals regiments’ scheme: men joined together under the promise that they would be able to serve with their friends and colleagues. Both this battalion and the 23rd Service Battalion fought at the Battle of the Somme. During the war, the 17th Battalion lost more than 1,000 men.

Not only did Chelsea support the battalion, but several current and former players signed up, and club secretary Bert Palmer became ‘Honorary Recruiting Officer’, resulting in the attestations of 60-70 soldiers. Chelsea’s star winger Teddy Foord and amateur captain Vivian Woodward were among the first footballers and Chelsea players to join.

Though Woodward appealed to Chelsea fans to join up, the response was poor, creating a class bias that depicted footballers and supporters as ‘shirkers’, despite the Chronicle’s claims to the contrary: 2,000 professionals and over 300,000 amateur players had already enlisted.

A young Chelsea fan, James Ridley, who lived opposite Stamford Bridge and had, at age 13, volunteered as a ball-boy, signed up as a soldier in the Football Battalion in 1915, and served alongside his footballing heroes in the trenches.

Chelsea and Everton were led out by Chelsea pensioners on November 5, 2016 – Photo: Marc Atkins / Offside.

Woodward received special permission from his battalion commander to play in Chelsea’s first appearance in an FA Cup Final, against Sheffield United on 24 April 1915, which came to be known as the ‘Khaki Cup Final’ because of the Army-uniformed supporters watching from Old Trafford’s terraces. Although beaten on the day, the match remains significant in Chelsea’s – and English football’s – history.

Professional football ultimately did come to an end with the suspension of the Football League. Chelsea entered the localised London Combination, a league competition founded in 1915, primarily including London clubs. Chelsea played in every edition held during the remainder of the war, winning it in 1915-16 and 1917-18.

However, with the overall lack of professional football, players effectively had no choice but to go fight. One such player was Jack Cock, who had grown up in Fulham before becoming a pre-war star with Huddersfield Town. He joined the Football Battalion, and after the war signed for Chelsea, scoring England’s first post-war international goal.

Woodward was injured in battle, but recovered. Others, however, were less fortunate. Among them, Chelsea’s most decorated former player, George Kennedy, who died in battle in November 1917, having received the Military Medal and Distinguished Conduct Medal earlier that year, and George Lake, the only serving first-team Chelsea player to have lost his life, just days before the armistice.