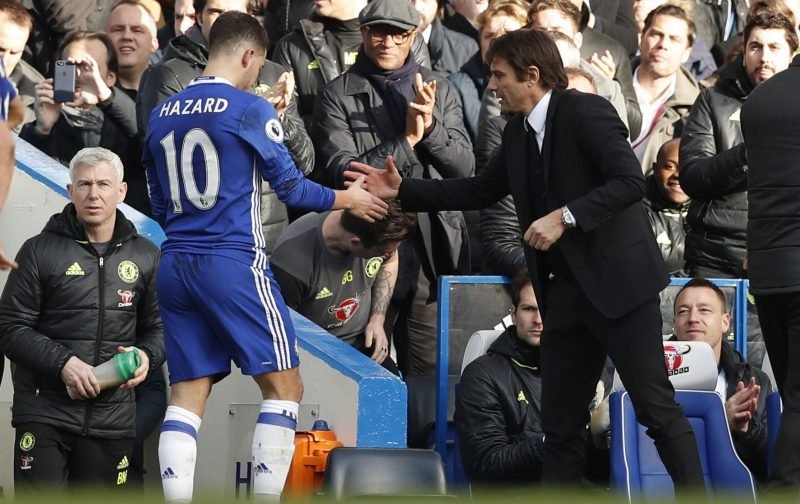 Chelsea forward Eden Hazard looks set to sign a new deal at Stamford Bridge despite reports linking him with a big money move to Real Madrid, according to TuttoMercatoWeb (via The Daily Star).

The Belgian international has been in sensational form for Antonio Conte’s men this season, having already netted 11 goals as well as laying one four assists in 26 Premier League games for the Blues.

The 26-year-old’s form has been one of the many reasons why Conte’s men are ten points clear at the top and galloping towards a fifth Premier League title in 12 years, and it’s form that has reportedly caught the eye of Zinedine Zidane and Real Madrid.

The Spanish giants, currently second in La Liga behind rivals Barcelona, were linked with a move for Hazard a few days ago, but that interest looks set to end as the Chelsea man is reportedly on the verge of agreeing a new deal at Stamford Bridge.

The 26-year-old currently has a contract in West London until 2020, yet reports suggest that he is going to extend that by a year, which will be music to the ears of Chelsea supporters who have seen Hazard produce some of his best football this season.

The 2014/15 PFA Player of the Year suffered a dip in form last season in the Blues’ disastrous title-defence, yet he has re-discovered and at times gone beyond that level this term, and looks set to be an integral member of the Chelsea squad for many years to come.