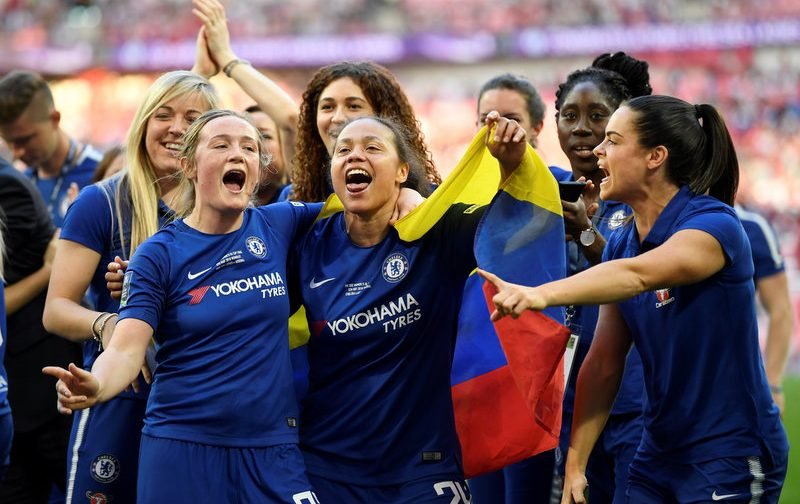 The Blues got their hands on their second league title following 2015’s triumph, thanks to goals from Drew Spence and Jonna Anderson, as the visitors completed the domestic double having defeated Arsenal in the FA Cup final earlier this month.

Chelsea sit nine points clear of second placed Manchester City in the WSL 1 standings, and could end the 2017-18 season unbeaten if they avoid defeat at Liverpool on the final day of the campaign this Sunday.

It is the club’s fifth major honour, and second double feat to match their efforts from 2015.

The Blues were led by assistant Paul Green, with manager Emma Hayes advised not to travel at this stage of her twin pregnancy, and he paid tribute to his special group of players.

“They’ve worked very hard – they’re a special group of players with a hunger and desire to win trophies,” he told the club’s official website.

“To win the double tonight is absolutely fantastic for them. They deserve it. It’s great for the club and terrific for Emma, who has been sat at home watching.

“To get a double and to the semi-final of the Champions League is absolutely tremendous. We’ve got to try and build on that from here.

“We wear the Chelsea badge. We’re expected to compete for trophies, domestically and Europe. We’re lucky to work with such a special group of players.

“It’s all about the team. We’ve proved over the course of the season we’ve got the strongest squad in the league and that extra depth has really seen us through. It was no different tonight.”

Blues midfielder Gemma Davison added, “We knew that we’d have to stay focused on this game and we wanted to make sure we got the result as well to keep winning and stay unbeaten.

“We stayed focused and patient throughout the game. Good teams do that, and we put the pressure on in the last 30 minutes and got our rewards.

Get in. A pleasure to watch that from home. Champions of England, we know who we are. Love you girls x @ChelseaLFC

“We all know that every player in our changing room can make a difference. Drew Spence has had a phenomenal season and she deserves a lot of credit for that goal.

“This whole squad’s got a good character about it and we’ve displayed it all season.”