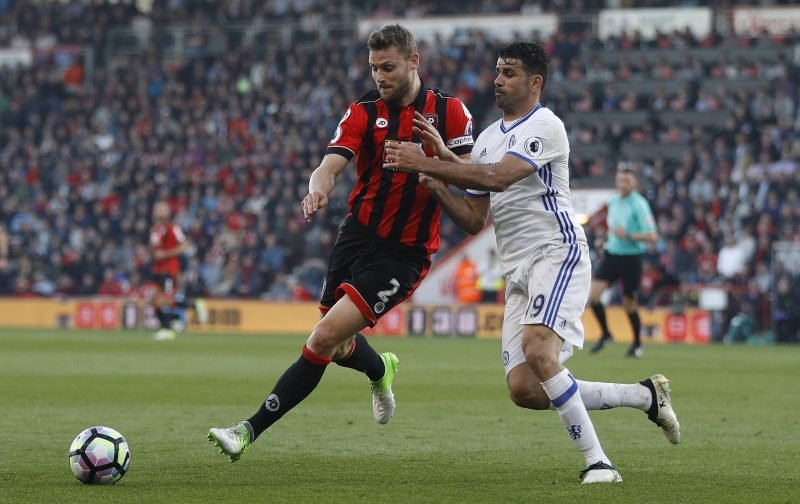 Premier League leaders Chelsea further stamped their authority on the title race courtesy of a 3-1 victory at Bournemouth on Saturday.

Antonio Conte’s Blues saw second place Tottenham close the gap to four points after thumping Watford 4-0 earlier in the day, but an Adam Smith own goal and an Eden Hazard strike in the first half set them on their way to a 24th win of the campaign.

And although the Cherries hit back through Josh King’s 11th goal of the season, Marcos Alonso’s wonderful free-kick midway through the second period secured the points for the West London outfit.

On what was a generally positive day for Chelsea, the performance of one player didn’t go down too well with the Blues faithful, that of striker Diego Costa.

The Spanish international has netted just three Premier League goals in 2017, and has now gone five matches without a goal in all competitions.

And several Chelsea supporters are getting increasingly frustrated with the 28-year-old, lamenting another ‘poor’ performance at the Vitality Stadium yesterday…

conte is becoming stubborn…it is very clear costa is costing us game after game with poor performances!!!! #CFC

Costa has been very poor of late. Despite poor performances, he has no competition and this is clear to see in how he plays and acts… #CFC

Costa needs to step up his game he's been poor since January. Thankfully players like @hazardeden10 have supplied goals needs 2 improve #CFC

Good win. Hazard and Pedro superb as per usual. We have serious problems up front though; Costa woeful again #cfc