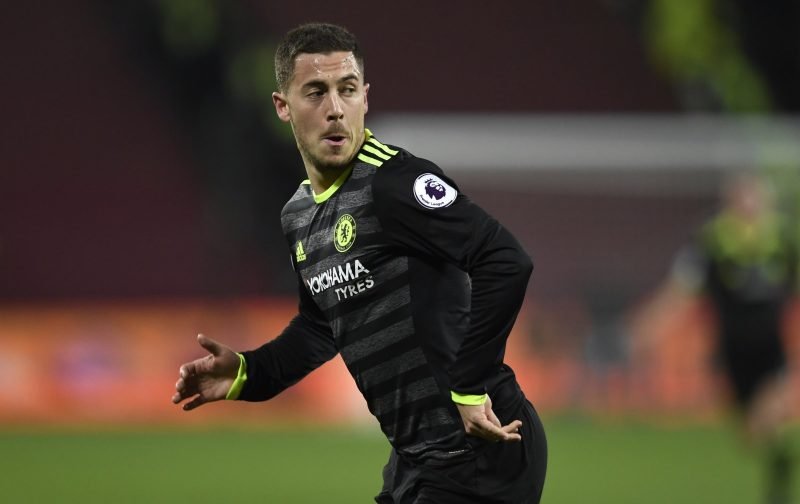 European champions Real Madrid may use 25-year-old James Rodriguez as part of a deal to bring Chelsea’s Eden Hazard to the Bernabeu this summer, according to Marca (via The Daily Mail).

The Blues forward has been in scintillating form for Antonio Conte’s side this term, scoring 11 goals and laying on four assists in 26 Premier League games to help the West London outfit to a ten-point lead at the top of the division.

With the 26-year-old’s form reminiscent of that we saw when he helped inspire Jose Mourinho’s Chelsea to the title in 2014/15, and thus won the PFA Player of the Year award that season as well, interest has been mounting in the Belgian international from Zinedine Zidane’s Madrid, with Hazard’s representatives reportedly having held ‘positive talks’ with the Spanish giants.

And it appears that out-of-favour Rodriguez, who has started just seven La Liga matches this term and scored 30 goals in 102 games for the club overall, could be used in any deal for Hazard given that Blues boss Conte is reportedly an admirer of the Colombian captain.

The 25-year-old has struggled for regular football this term but has made an impact when on the pitch, scoring twice and laying on five assists in just 680 minutes of league action thus far, and a hat-trick in his one and only Copa del Rey encounter this season against Sevilla in January.

The Blues have been linked with a move for the Colombian in transfer windows gone by, and with Rodriguez struggling for football in the Spanish capital anyway, a move for Hazard isn’t exactly going to help his cause.

Thus, an exchange deal of some sort makes sense for both parties.