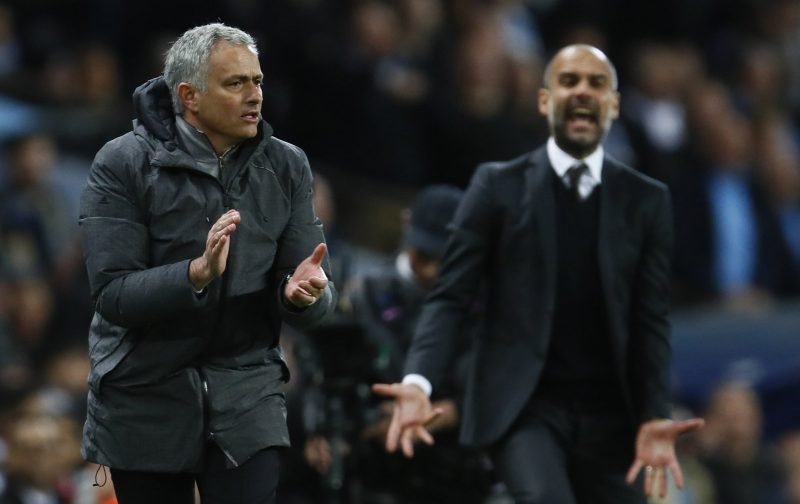 Manchester City and ten-man Manchester United played out a dour 0-0 draw at the Etihad Stadium on Thursday to make it no clearer who will be playing Champions League football next season.

Jose Mourinho’s Red Devils had a clear game plan to frustrate the home attack, and for the most part stuck to the plan reasonably well, although Pep Guardiola’s side did create opportunities that on another day may well have gone in the back of the net.

Striker Sergio Aguero struck the post from point-blank range in the first half, while David De Gea was called into action to deny Yaya Toure and Aleksandar Kolarov from long range.

United midfielder Marouane Fellaini was sent off for a headbutt on Aguero six minutes from time, just 19 seconds after getting booked, to give the visitors a tricky final few moments, and their hard work was almost undone when substitute Gabriel Jesus turned home Aguero’s cross, although it was rightly ruled out for offside.

And it meant that both managers had to settle for a point apiece, which leaves City in fourth and a point clear of their neighbours with just five games of the season remaining.

Unsurprisingly, many supporters took to social media after the game to express their views on the contest, with several City fans pleased with the performance, but again rueing their side’s lack of a killer instinct in the final third…

Another dominant performance by #mcfc but still have not got the killer instinct. Utd were so negative no wonder they draw so many.

While many supporters were thrilled with the return to form of captain Vincent Kompany, who has been troubled by injury for much of the last few years…

Been looking defensively solid with Kompany back in the team, missed him more than anyone else. Man of the match again today. #MCFC

Great seeing captain Kompany back, truly a much better side with him. Immense player. #MCFC

When fit, Kompany is probably the best defender on the Premier League. #MCFC

Poor performance in terms of going forward but very resilient at the back. Point gained I suppose. #Derby #boredraw #mufc

I can sum up our performance in one word: Resilient. #mufc

Solid Mourinho style away game point, unbeaten run extends, a win on Sunday and we’re in the top 4 and no Fellaini for 3 games. Win! #mufc

Was pleased with the defending and the way we hung on, much more of a solid defensive unit these days *touchwood* #MUFC

Aguero clearly made a meal of it, but Fellaini was beyond stupid to lead with head. Even with our injuries, I’m glad he’s suspended! #MUFC

If @ManUtd miss top 4 this season, Fellaini should take large chunk of the blame! What a stupid and unprofessional display! #mufc

Never a red card but how stupid was that to even get in a position like that from Fellaini. There’s no brain under all that hair. #MUFC