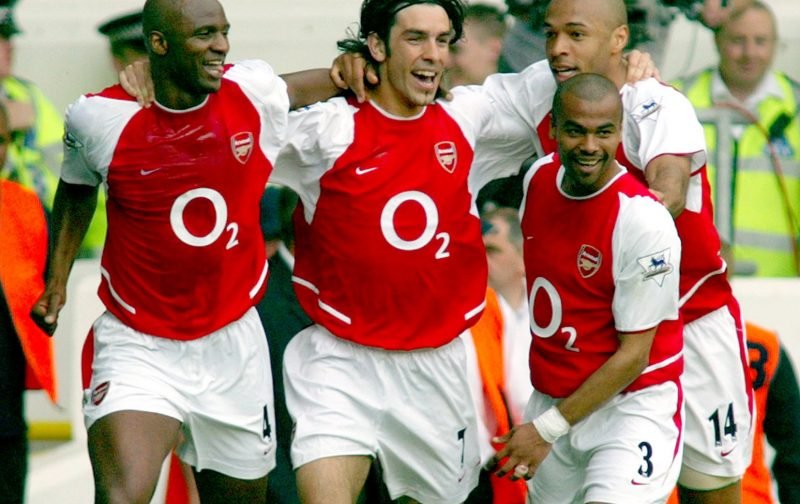 Ahead of the North London derby that will see Arsenal play Tottenham Hotspur, Shoot takes a look at a player who had an influential part to play in this fixture for the Gunners, Robert Pires.

Pires signed for Arsenal in 2000 for £6million from Marseille and was bought to fill the boots of Marc Overmars, who had departed fro Barcelona.

Despite firstly struggling to adapt to the physicality of Premier League football, the France international went on to make 198 appearances and cemented himself as both a club and league legend.

In his first season, once acclimatising to English football, Pires went on to score important goals for the club – one of them being the winner against Tottenham in the FA Cup semi-final.

The 2001/02 season saw the playmaker show his true skill and style with the most assists in the league (15), which is especially impressive given that he missed the last two months due to a cruciate ligament injury which saw him miss the World Cup in Japan and South Korea.

That season he won both the FWA Footballer of the Year and Arsenal’s Player of the Season as he played a pivotal role in helping the club win the Premier League for the second time league.

Returning to the pitch in October 2002, Pires had yet another impressive campaign a Highbury, scoring 17 times in all competitions including the winner in the FA Cup final against Southampton.

The following term saw something quite remarkable as Arsenal and Pires wrote their name in history by winning the title without losing a single Premier League game.

A cherry was placed on top of the historic moment by winning the title at rivals Tottenham in a 2-2 draw which saw Pires score the visitors’ second at White Hart Lane.

This feat has not been repeated ever since and may never be achieved again.

Pires, who scored a season’s best 18 goals and grabbed eight assists in all competitions during the Invincibles year, was certainly one of the standout players in a special team. 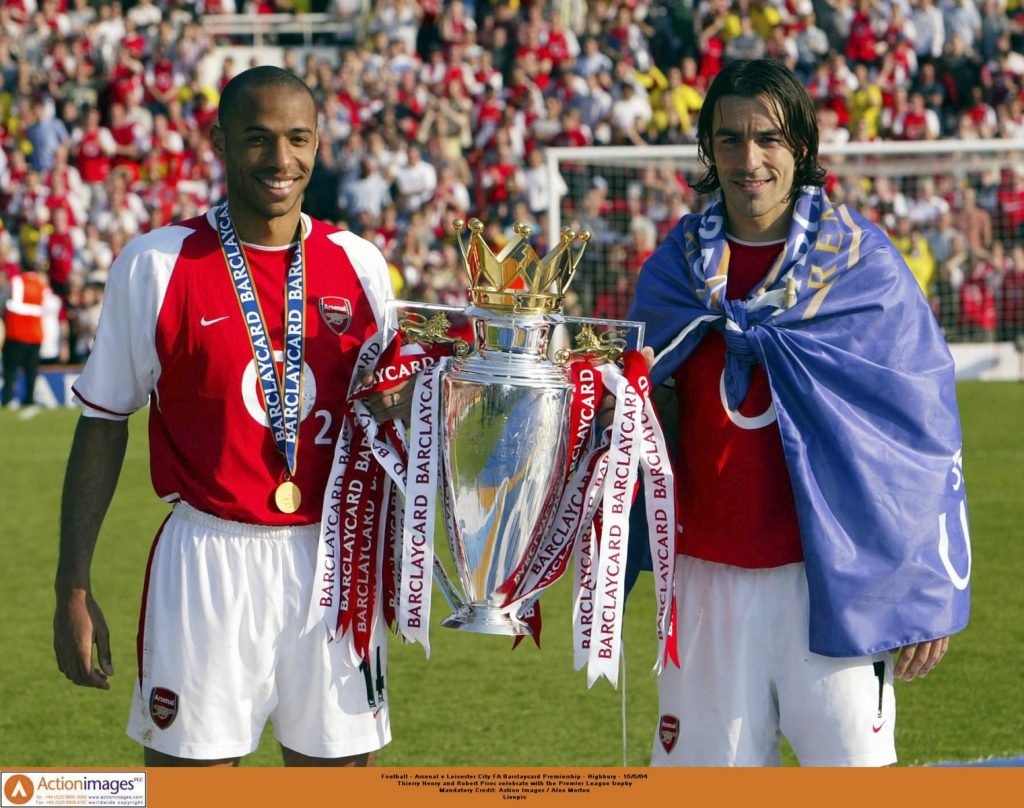 The Reims-born star and his teammates’ record-breaking 49 league game unbeaten run came to an end against bitter rivals Manchester United at Old Trafford in October 2004 as the title went to Jose Mourinho’s Chelsea.

Arsene Wenger’s Gunners didn’t go trophyless though as they got revenge against United by defeating them in the FA Cup Final on penalties – a game which Pires played 105 minutes of.

Despite being known as a skilful winger who scored lots of goals, there’s another – more bizarre – moment fans will remember Pires for.

In the 2004/05 season in a game against Manchester City, Arsenal were awarded a penalty and Pires tried to pass to Henry instead of shoot but totally missed the ball.

Man City ended up clearing it while Pires and Henry – two of the greatest players to play the game in England – were – for once – left with egg on their face.

It was one of those moments that gets shown time and time again in programmes highlighting some of the Premier League’s most unusual situations throughout its history.

Pires’ final season in an Arsenal shirt was also the club’s last at Highbury, as they got set to move to the Emirates in the summer of 2006.

Compared to previous campaigns, it was also one of disappointment on the field for both club and player as Wenger’s talented squad failed to land any silverware and finished in their lowest league position (4th) since 1996.

In a fitting goodbye to one of this country’s most famous stadiums, the Frenchman did notch his side’s opener in the 4-2 defeat of Wigan Athletic on May 7, 2006. 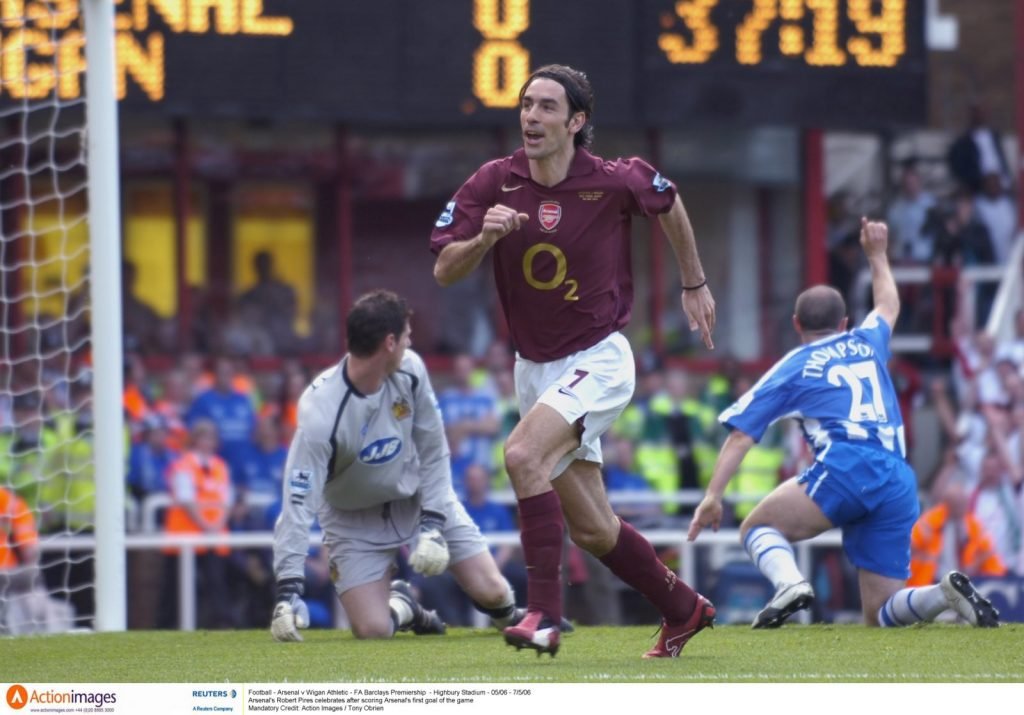 In 2006, Pires, aged 32, departed from the club and went to Spanish side Villarreal as Arsenal looked to bring through younger players.

In the seven seasons that the France international had in North London he had scored 62 goals and won three FA Cups, two Premier League titles and became an Invincible.

He’ll truly always be remembered as a highly influential player in one of the most successful eras in Arsenal’s history.

One stat that Gooners like to remember is that Pires scored a joint record eight North London derby goals against Spurs in an era where the gap between the two clubs was very significant.

Away from Arsenal, Pires had also been collecting honours throughout his career where, at international level, he won 79 caps for France and won the 1998 World Cup on home soil. 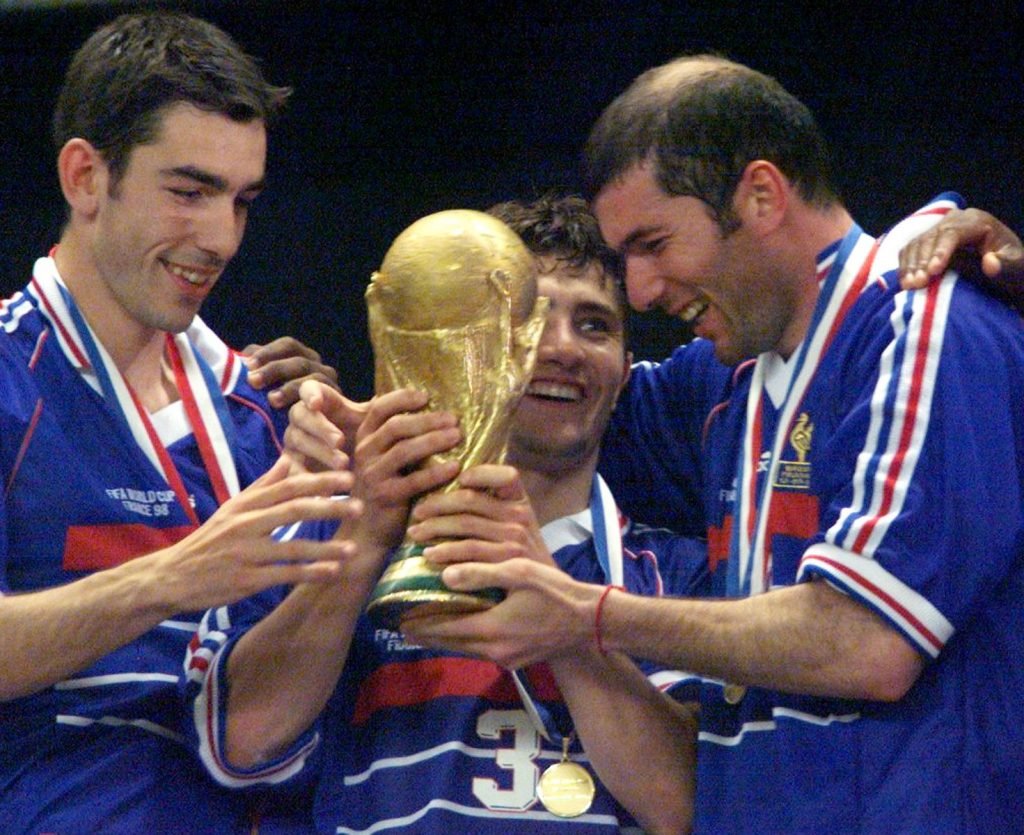 Pires (left) with the World Cup.

He also helped Les Bleus win the 2000 European Championship and two Confederation Cup crowns – the first of which he was awarded the Golden Ball (best player) and Golden Shoe (top scorer) in 2001.

In 2010, Pires made his return to the Premier League with Aston Villa manager Gerard Houllier signing him.

He made nine appearances for the Villans and shortly after signed for Goa in the Indian Super League.

After one season at Goa, Pires retired from the game and has since coached at Arsenal until the restructuring under Unai Emery saw him leave his position.