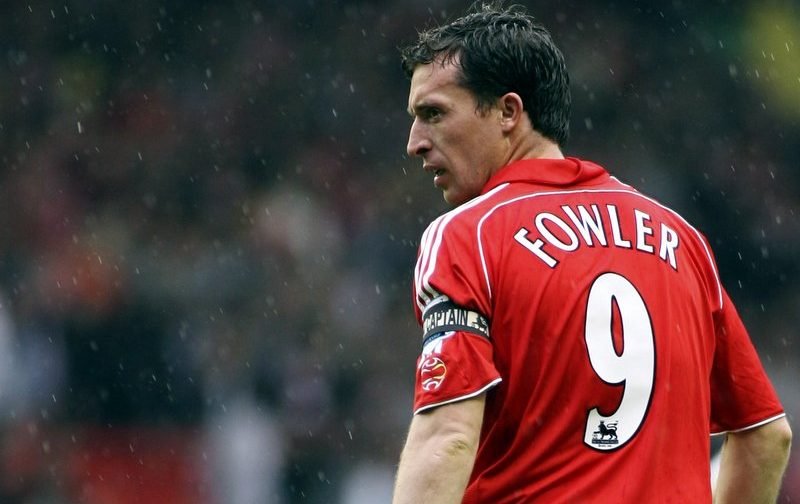 Celebrating his 43rd birthday this evening is Liverpool legend Robbie Fowler, as we look back on ‘Growler’s’ two treasured spells at Anfield.

The England international striker, who played 26 times for the Three Lions, scored almost one goal every two games in a Reds shirt – netting 183 goals in 369 appearances in all competitions for the Premier League club overall.

Born in Toxteth, Liverpool; Fowler grew up supporting Merseyside rivals Everton, but joined The Reds when he was just 11-years-old, putting pen to paper on his first professional contract on his 17th birthday in April 1992.

It took just nine months for the teenager to work his way into the first-team picture, when named as a substitute for Liverpool’s FA Cup third round replay at home to Bolton Wanderers. 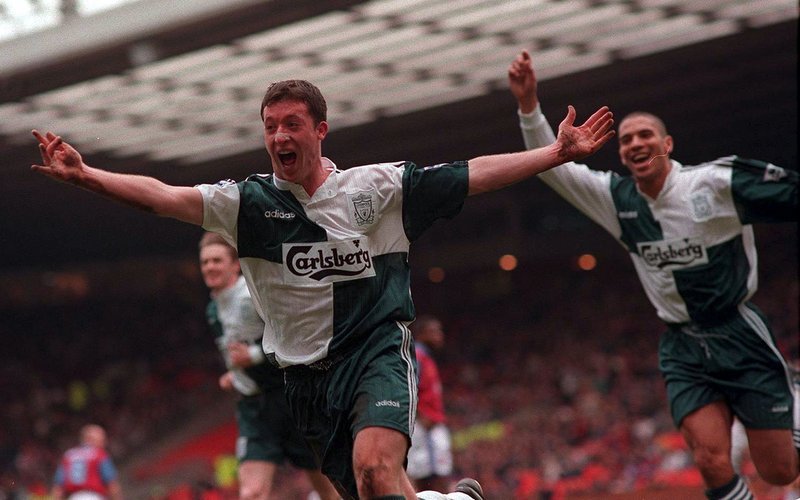 Highly-rated within The Reds’ youth ranks, then manager Graeme Souness handed Fowler his senior debut against Fulham in the League Cup in September 1993, with the ‘Toxteth Terror’ netting on his debut during his side’s 3-1 victory over the Trotters, before the 18-year-old starlet scored all FIVE goals in the second leg at Anfield – becoming the fourth player in the club’s history to score five goals in a competitive fixture.

After announcing himself to English football in devastating style, Fowler ended the 1993-94 campaign as the club’s top goalscorer, with 18 strikes in all competitions.

Another star performance which outlined his natural scoring ability came when he scored the fastest-ever hat-trick in Premier League history, netting a treble against Arsenal at Anfield inside just four minutes and 33 seconds.

That feat has since been surpassed by current Liverpool forward Sadio Mane – two minutes and 56 seconds.

The 1994-95 season saw Fowler surpass the 30-goal landmark, as well as helping Liverpool defeat Bolton in the League Cup final at Wembley Stadium to lift his first piece of silverware with the club.

Fowler was voted the PFA Young Player of the Year for two consecutive terms, and was proving to be one of Europe’s most lethal strikers in front of goal.

He finished as Liverpool’s top goalscorer in all competitions for three successive seasons (1994-95, 1995-96, 1996-97) and became a Kop icon, despite his early childhood admiration for arch rivals Everton. 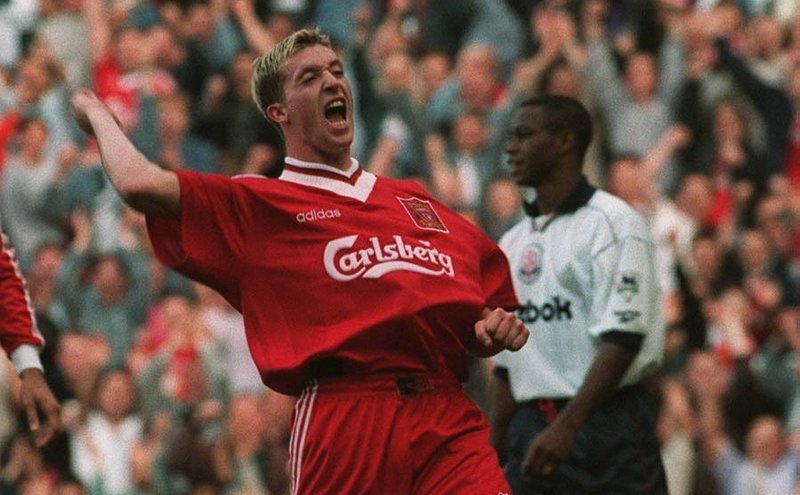 The classic ‘local boy made good’ took a small step back out of the limelight when the emergence of Michael Owen struck, who went on to finish as the club’s top goalscorer for the next seven campaigns.

But christened ‘God’ by the Kop, Fowler was still adored by management, team mates and fans alike, as he was handed the captains armband, due to injury to Jamie Redknapp.

Despite being third-choice forward behind Owen and Emile Heskey on Merseyside, Fowler skippered the side to victory in the 2001 Worthington Cup final, opening the scoring with a spectacular effort against Birmingham City at the Millennium Stadium, before converting a spot-kick in the all important penalty shootout in Cardiff.

His wonderful Worthington Cup strike was just a taste of things to come during the rest of the 2000-01 campaign, as Liverpool defeated Arsenal in the FA Cup final back in Wales, before Fowler scored once more in the UEFA Cup final in Dortmund, Germany, during The Reds’ thrilling 5-4 triumph over Alaves.

However, his Anfield career took a surprising turn for the worse in November 2001, as after seemingly falling out with manager Gerard Houllier and questionably being dropped due to the boss’ rotation policy during the start of the new season, the ‘Toxteth Terror’ was sold to Leeds United for £11m.

His departure proved devastating to Reds fans, with some so upset, they wrote letters of protest.

Unfortunately for Fowler, he never flourished at Leeds United, and did not set the world alight at Manchester City between 2003 and 2006. 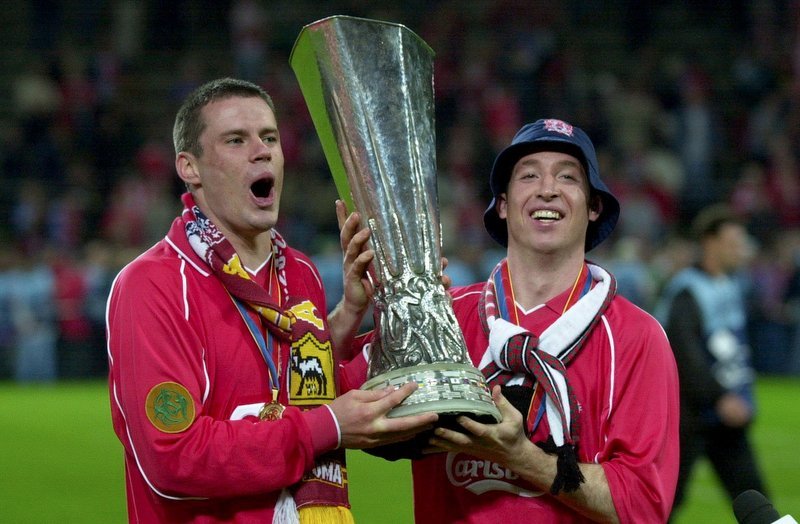 Stating he was forced out of his beloved club, his affection for Liverpool never diminished however as he flew out to Istanbul to witness The Reds’ remarkable comeback in the 2005 UEFA Champions League final against AC Milan.

Then, less than a year later, ‘God’ returned home, as jubilant Liverpool fans celebrated the club re-signing Fowler on a free transfer in January 2006.

He found the back of the net five times before the end of the season, before signing a new one-year deal to extend his second spell at the club until the summer of 2007.

The England international pitched in with a further seven goals in 23 games in all competitions for Rafael Benitez’s side during the 2006-07 season, as the club won the FA Community Shield, finished third in the Premier League, before AC Milan gained revenge from their 2005 horror defeat by defeating Liverpool 2-1 in the Champions League final.

His final appearance for The Reds came against Charlton Athletic at Anfield on May 13, 2007, during Liverpool’s 2-2 Premier League draw.

Released upon the expiry of his contract, ‘Growler’ moved onto the likes of Cardiff City, Blackburn Rovers, North Queensland Fury and Perth Glory in Australia, before hanging up his boots with Muangthong United for the final time, where he also managed the Thailand outfit as a player-coach until the end of the 2011-12 term following the departure of Henrique Calisto. 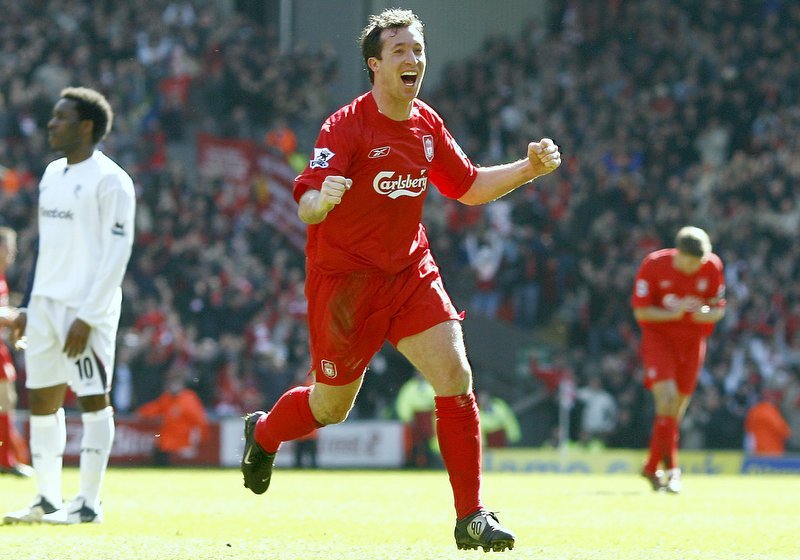 Fowler has since played back at Anfield for various testimonial and legends matches, as well as featuring in Soccer Aid 2016, whilst enjoyed coaching spells at various clubs including Liverpool, Milton Keynes Dons and Bury, and even applied for the head coach role at another former club, Leeds United, back in September 2014.

But overall, he will always he worshipped as a Liverpool legend at Anfield, and as the club says – ‘God’, but never forgotten.