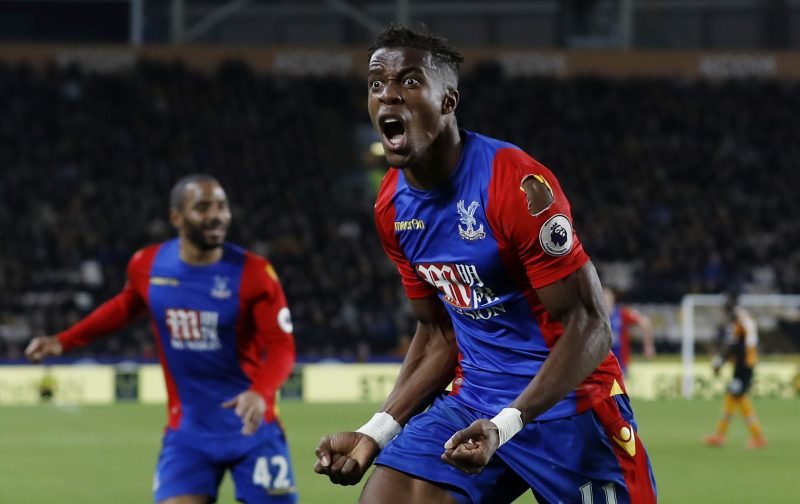 With four wins from their last four Premier League encounters with a trio of clean sheets and a win over the champions elect, the table has been looking significantly better for Crystal Palace and their fans.

Their recent run of good form has seen the club move out of the relegation zone and leapfrog Swansea City into 16th place with a home game in hand against Tottenham Hotspur to come.

The recent run of form is mainly down to one man, that man is Wilfried Zaha. Week in week out the 24-year-old draws up attention for his startling displays against the league’s best opposition and he finally looks like the complete product.

This season has been his highest scoring season in the Premier League to date with six goals and he has already matched his highest assist tally in six with ten more matches still left to play.

His successful dribbling percentage has improved every season and the skillful playmaker has a success rate of 4.2 dribbles per game which ranks him amongst the highest in the Premier League alongside the likes of Eden Hazard.

His strength and agility cause a number of problems for the opposition and this term he has been a standout performer for a club who have been struggling for lengthy periods of this season.

His final balls have significantly increased over time and this was the area many people felt was his weakness and perhaps the reasoning behind his wretched time at Manchester United. He has always had the ability to beat his man with his pace and skill but his end product tended to be lacking whether it be a shot on goal or a cross into the box. This year, however, his highest scoring tally and highest assists tally is a clear sign he has improved his decision making in the final third.

The winger, who joined the Eagles academy at the age of 12, has Palace in his blood and has recently discovered success at international level also. Zaha was initially born in Ivory Coast and although he has previously made two non-competitive appearances for England, the Palace star recently switched his allegiance to The Elephants. In six appearances, the playmaker has already netted twice for his country of birth including a stunning solo individual goal against Russia.

It is a clear example of how far he has come over the last few years since his disappointing time at Manchester United, where he struggled to cement a place in the match day squad.

His move to Manchester United was too early in his career and he wasn’t developed enough to make it at one of the biggest clubs in world football. He wasn’t really given his chance by David Moyes and it was just one of those things, if perhaps he had the guidance under Sir Alex Ferguson – the man who initially signed him for £10million – things might have been different.

This time around and four years later it appears the time is right to finally let Zaha leave and try his shot at making it at one of the Premier League’s top six sides. He deserves his chance as he is always improving and this season has been an exceptional one for him on an individual note. It’s just a shame the club haven’t been able to build upon their 10th placed finish under Alan Pardew and things may have been different.

Tottenham Hotspur  have been heavily linked with the winger and a previous bid of £15million was eagerly rejected by chairman Steve Parish. It was reported that Zaha was highly interested in the move and the prospect of playing Champions League football however initial talks broke down. You would expect Mauricio Pochettino to come back with an improved bid and it seems likely the club are going to struggle to keep their key man at the club for another season. Zaha could well be gone in the summer and he’ll be extremely difficult to replace. He lives and breathes Crystal Palace, they lost him once and they won’t want to lose him again.