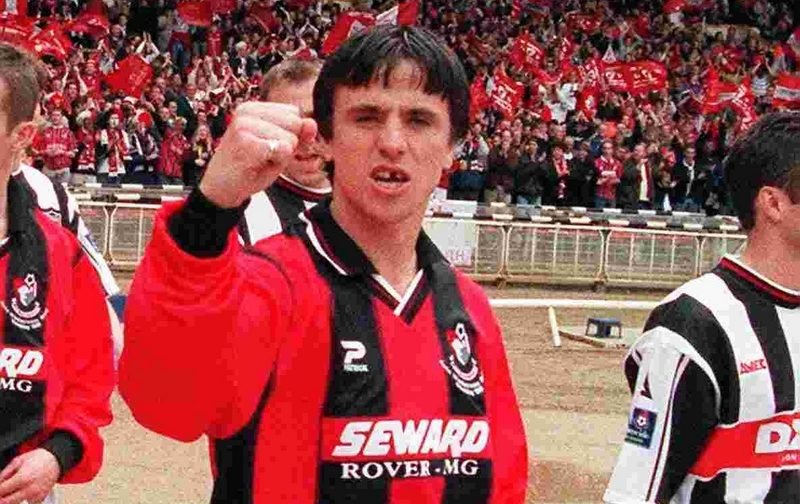 Due to the nomadic and almost permanent third and fourth-tier existence encountered by AFC Bournemouth up until Eddie Howe’s second spell in charge at Dean Court, cult heroes were often few and far between.

In fact, it was possibly easier to name a worst-ever Cherries eleven rather than a best, although it would be erroneous to think that no stand out players ever pulled a Bournemouth jersey before 2012.

Players like Ted MacDougall, Luther Blissett, Darren Anderton, even the great George Best all endeared themselves to the Dean Court faithful at differing stages of their careers, but none of the aforementioned players – apart from MacDougall, who scored nine goals in a single FA Cup game against Margate in 1971 – actually achieved anything noteworthy, like playing or even scoring at Wembley Stadium for example.

One player, John Bailey, did both, meaning he is held in the highest esteem possible by Bournemouth supporters.

Sadly his career was ended by a serious back injury just a year after his halcyon moment, but nevertheless, his achievement is still one that’s fondly remembered.

Bailey, a tough tackling, gritty midfielder, joined Bournemouth in the summer of 1995. Signed by the club by then manager Mel Machin from non-league Enfield for just £40,000, he was a typical signing for the times when the Cherries were never far from financial oblivion and keeping the wolf from the door was the number one priority.

Alongside a number of players signed from non-league, it was also the norm for Bournemouth back then to pick up discarded Premier League youngsters. It was around this time that Machin signed players such as Matt Holland, who would of course go onto play against Germany in the 2002 World Cup and enjoy a long and fruitful top-flight career with Ipswich Town and then Charlton Athletic.

Machin had, the previous season, overseen a magnificent ‘Great Escape’ with Bournemouth struggling at the wrong end of the Division Three table after a disastrous second-half of 1994, which saw Tony Pulis relieved of his managerial duties, the result of a messy boardroom battle between then Chairman Norman Hayward and his eventual successor Ken Gardiner.

This meant that Bournemouth started the 1994-95 season with no manager and retired youth team manager Sean O’Driscoll lining up at right-back.

Machin was appointed in September and signings like Holland, Neil Young, Jason Brissett, Steve Jones and Ian Andrews bolstered a wafer thin playing roster, although results continued to be poor and at Christmas, Bournemouth had just nine points.

Remarkably, Machin’s team showed promotion form in the New Year and escaped after beating Shrewsbury on the final day. The following off-season was one full of optimism, although a lack of funds meant Bailey’s capture was the only one that involved a transfer fee.

Bournemouth started the season in fine form and even topped the table during the opening month, although it proved to be an inconstant campaign, one which mirrored Bailey’s individually too although a late season run of games playing as a right sided midfielder saw the ex-Enfield man turn in some eye catching displays.

Although not a conventional winger, Bailey was one of many who Machin managed to defy the square peg round hole theory as he also converted central midfielder Ian Cox into a silky ball playing centre-half. It didn’t always work however as later in his tenure, a decision to play striker Christer Warren at left-back backfired spectacularly.

In Bailey’s second full season at Dean Court, he enjoyed a fine run in the side and forged a great partnership with right-back Neil Young and despite a near brush with financial oblivion; good things were just round the corner for both club and player.

Somehow, during the 1997-98 close season, Bournemouth became Europe’s first-ever community club as they were rescued by a trust fund, spearheaded by cash used from supporter donations.

Remarkably, given the perilous state of affairs in the boardroom, only one player, Holland, was sold to aid the Trust and that sale even occurred after the take-over had been rubber stamped.

Just having a club to support every Saturday seemed like an achievement in itself, but Machin still had the nucleus of his ‘Great Escape’ team and with one or two free transfers and loan signings, the side were competitive and were rarely out of the top-half.

A play-off push would have possibly materialised after Christmas, but cup competitions and in particularly the Auto Windscreens Shield scuppered that for all the right reasons. The Football League Trophy, which is much maligned nowadays unfortunately, saw Bournemouth beat Leyton Orient, Bristol City, Luton Town and Walsall to book the Cherries first, and to date only, appearance at the famous Twin Towers.

Bournemouth’s opponents were Grimsby Town, who had already defeated Machin’s side twice in the League with Paul Groves, a player who would become known to Dean Court regulars for all the wrong reasons years later, scoring in a 1-0 and 2-1 win for the Mariners.

The Wembley final saw Bournemouth cheered on by nearly 34,000 fans, almost eight times more than the average home League attendance and after a tense opening; it was the first-time National Stadium appearance makers that went into the lead with Bailey tapping home after Grimsby stopper Aidan Davison had made a hash of a Jamie Vincent long throw.

Sadly, Bournemouth couldn’t find that elusive second and firstly Cherries gloveman Jimmy Glass palmed a Groves shot over the line after half-time and then Wayne Burnett scored a ‘golden goal’ winner in the additional 30 minutes.

Beaten, but not disgraced, Bailey’s moment will be one that’s revered in Cherries history for many years to come although little over a year after his Wembley strike, he was forced to retire from the professional game with a serious back injury.

Recently, the club held a fundraising event for his wife Emma, who is undergoing treatment for metastatic melanoma cancer and although far more gifted players have pulled on Bournemouth’s famous red and black stripes, only one can say he’s scored at Wembley.