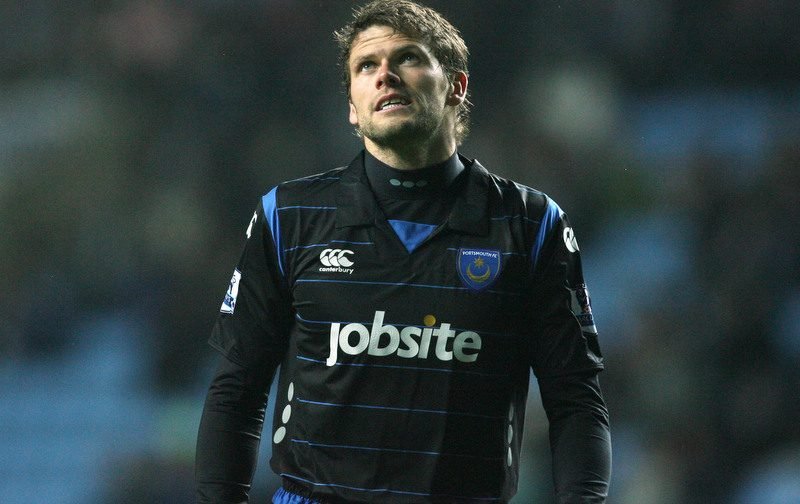 Here at Shoot! we love to delve into the archives and remember the heroes of old up and down the country.

These cult heroes, who are gods in the eyes of their fans but go largely unnoticed by the rest of the footballing world, more often than not come with brilliant stories behind them, and we’ve got another cracker today.

After exercising a clause in his contract with Charlton, which allowed him to leave the club, the former Icelandic international signed a two-year deal with Portsmouth. His first goal down South came in quite some fashion, netting in a historic 7-4 Premier League win over Reading.

Just a week later, Hreidarsson scored the second goal of his Pompey career, this time against former club Fulham. Regular football started to come his way, making 43 appearances in all competitions during the 2007-08 campaign.

However, undoubtedly the highlight of his season came on the 17th May, as it did with thousands of others. His clean sheet in defence helped keep Cardiff at bay as Portsmouth went on to lift the FA Cup for just the second time in their history. Hermann, as he is known to fans, played in every single game on the way to victory, partnering Sol Campbell at the back.

European football awaited the former Brentford and Crystal Palace man and he certainly made his mark, netting in a 3-0 home win over Heerenveen. This set up a good spell for Hreidarsson who, less than two months later, bagged goals in two consecutive league games with one coming against giants Liverpool and the other against Manchester City.

During the 2008-09 season, the now Fylkir manager was limited to just 23 appearances after snapping his Achilles tendon. His main contribution, however, was still an important one, having played in all five FA Cup games that helped his side get back to Wembley. Despite being ruled out of the semi-final and subsequently the final, his previous hard-work did not go unnoticed.

After relegation from the Premier League in 2010, and with administration on the cards, several first-team regulars left Pompey and it became unknown as to whether Hermann would stay at the club. Yet the nerves of fans were settled after he signed a one-year contract extension on 8th October. Despite largely being used as a substitute, the now 42-year-old regained his place towards the end of the season, making his 500th league appearance in the process.

In January 2012, the time had come for Hreidarsson to leave the club, signing for Coventry on a six-month contract. However, in September that year, fans began dreaming of Hermann in a blue shirt once again after there were rumours he was training with the club.

The money problems at the club prompted the Icelandic to offer his services for free as the extremely small squad were struggling in League One. Michael Appleton confirmed the possibility, but unfortunately the deal didn’t come through. Nevertheless, Hermann’s loyalty to the club was unprecedented and he has subsequently gone down as a club legend.

Even today, the odd appearance of Hreidarsson at Fratton Park is not unknown. In a fixture against Oxford United in 2014, the Fratton faithful were thrilled to see him emerge in the stands alongside fellow legend David James. Chants of ‘Hermann Hreidarsson’ rung around the stadium, particularly at half-time when he took to the pitch and started to sing FA Cup chants down the microphone.

That’s one moment that will never be forgotten and he is certainly one man that’ll go down in history.