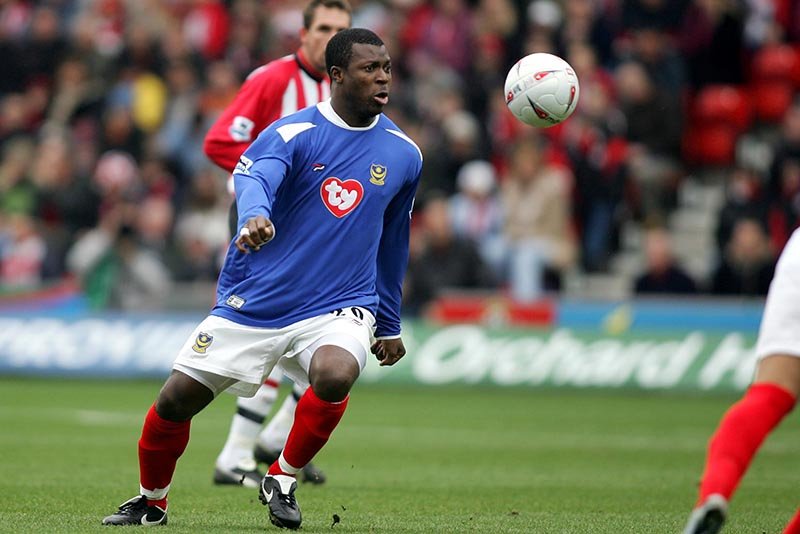 So, here at Shoot! we want to give these players the credit they deserve and, having looked at the career of Stoke’s Ricardo Fuller last time out, we’ve turned our attention to the South Coast, where we find a striker who made a huge difference to Portsmouth at the start of the millennium… Yakubu!

The Nigeria international originally signed on loan at Fratton Park in January 2003 from Israeli side Maccabi Haifa, and he made his debut for Pompey 12 days later in their 1-1 draw at Brighton.

The striker then netted three times in his next two games, including a brace in their 6-2 win over Derby, to make himself known on the English stage, before netting a further four times to help Portsmouth, then managed by Harry Redknapp, win promotion to the Premier League.

Unsurprisingly, Yakubu made his move to the South Coast permanent in the summer, and proved what a quality forward he was by netting 16 goals in 37 Premier League games, which in turn helped the club to a 13th place finish in the top-flight, some 15 points clear of danger.

He scored the winner in their South Coast derby success over Southampton in March 2004, and then netted four on the final day of the campaign against his future employers Middlesbrough at Fratton Park.

Although he didn’t score as often in his second full season at the club, albeit did net 13 times in 30 league games for Portsmouth, it was his final goal for the club that many Pompey fans will remember, as his equalising goal against Bolton on May 7 secured their Premier League status.

His tally of 13 goals that season was bettered only by Henry, Andy Johnson, and Robert Pires, which underlines how integral he was to that Pompey team.

Yakubu earned a big money move to Middlesbrough that summer, although left Portsmouth having netted 43 goals in two and a half seasons on the South Coast.

He left the club in a much better state than when he joined it, and his tally of 28 goals remains the most any Pompey player has ever scored in the Premier League.

Boro, Everton, Leicester, Blackburn, and Reading all benefitted from Yakubu’s services following his spell at Portsmouth, before he signed for Turkish side Kayserispor last year.

He was a true cult hero, and one player Pompey fans will have great memories of from his three-year spell at Fratton Park.