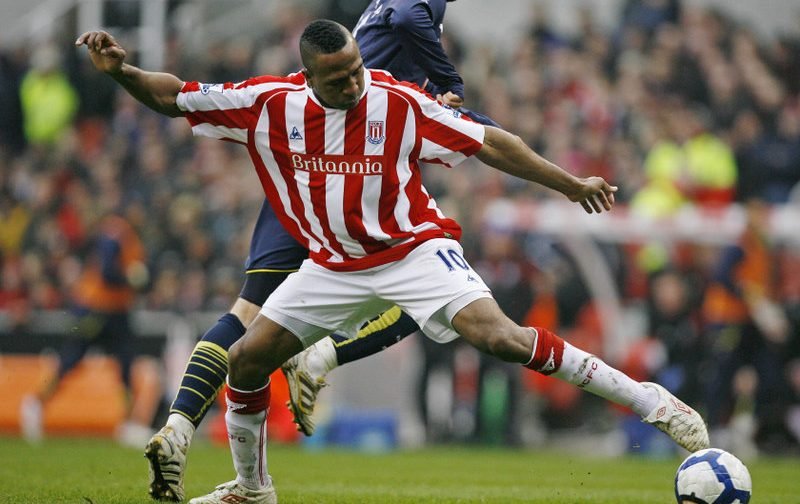 Here at Shoot! we like to think that we have the ability to look at certain players in a different light to other publications. Many players, although heralded by their own fan base are ignored by the wider footballing family.

We’ve already brought you the tales of many other cult heroes, but now our focus turns to Staffordshire, and the Bet365 Stadium.

Type in on your search engine of choice who Stoke’s favourite number 10 is, and only one name will appear: Ricardo Fuller.

From that gloomy Bank Holiday weekend in 2008, to that luminous afternoon of FA cup heartbreak at Wembley in 2011. He will forever be remembered by the Potters. For them, he is a true cult hero.

But while his name will always be associated with Staffordshire, it was Kingston, the capital city of Jamaica where Fuller was born. He began his professional career at the age of 19 as he featured for Tivoli Gardens academy; while, when he joined, they were the champions of the Caribbean country, Fuller excelled- greater things would be in store for Jamaica’s future number ten.

Premier League club Charlton Athletic were the first to take interest. Alan Curbishley offered the youngster a trial. The Valley was not to be his future home, however, despite performing well in the three reserve fixtures he featured in for the Addicks.

His home would be in South London, though. His destination was some 11 miles up the road; in February 2001, he began his professional football career with Crystal Palace, for a fee of approximately £1 million. Things wouldn’t exactly work out with the Eagles. He just didn’t enjoy England. A return to Jamaica loomed.

He made his return back over the Atlantic at the end of 2001. He didn’t make the trip back to the bright lights of London, however; instead, more humble surroundings. Hearts was the destination. Craig Levein the manager.

He made an instant impact. Eight goals in 27 appearences propelled him into the minds of Football League clubs across the land. His eventual move came in 2002, when he made the trip to Deepdale to sign for a Preston side who, a year earlier, had finished just three points off the Playoff places in the old Division One (now the Championship).

He began to make a real name for himself. After netting 17 times in 2003-04, he made the move to the Premier League. Harry Redknapp signed him up for a Portsmouth side who had just won the Second tier of English Football for the first time.

Maybe, for now, it was just one step too far. He returned to the Championship with Southampton the following year. Under George Burley he netted nine times, in a season where he played alongside a teenager from Cardiff: his name was Gareth Bale.

By 2006, it was time to move on again. This move would change his life. It was destination East Staffordshire, as he signed for Tony Pulis’ Stoke City. His second season with the Potters was one to remember.

He played an integral part of the Potters most memorable campaign, as Stoke gained top division football for the first-time in 23 years. Fuller netted 14 times in his 42 league appearences, including playing in the full 90 minutes on the day the Potters confirmed their place in the Premier League against Leicester City. It was most certainly a May Bank Holiday to remember.

Premier League football had not been nice to Fuller in the past, however. How would he cope now? He coped with pure ease; making an immediate impact as he featured for the Staffordshire side 35 times in their first ever Premier League season – they would finish in a decent position also: 11th.

The highlight, however, came a year later. Following joy over Bolton in the semi-finals (in some style also), Potters fans travelled down the M40 in May of 2011 for the clubs most prestigious day; for the first time in their 148-year existence they would feature in an FA Cup Final. It was also an unforgettable day for the players; this was the first time Fuller had featured in a major domestic final at the 90,000-capacity stadium.  While the scoreline did not go in Pulis’ men’s favour, it was a day that Fuller will never forget.

After departing the then Britannia Stadium in 2012, Fuller flirted with the lower leagues of English football; he made his return to Charlton in 2012, playing Championship football for the Addicks, while he also played in the second tier for Blackpool and Milwall respectively, before retiring after a short spell at Boundary Park for Oldham. But there is only one club he’ll be remembered at: Stoke City.