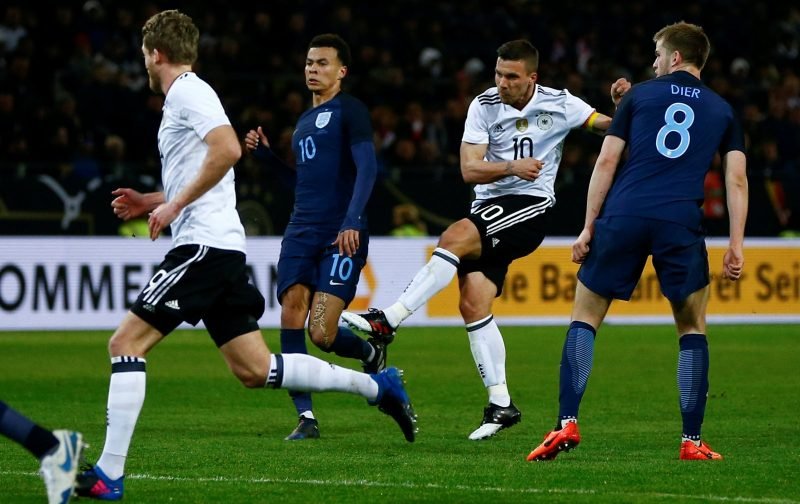 Gareth Southgate’s first game in permanent charge of England ended in a 1-0 defeat against world champions Germany on Wednesday night.

The former Middlesbrough boss was appointed as Sam Allardyce’s successor back in November after leading the side to two wins and two draws during his interim stint in charge, but a Lukas Podolski strike 21 minutes from time sealed the win for Joachim Low’s men in Dortmund.

Both Dele Alli and Adam Lallana went close as the Three Lions produced an impressive display against the 2014 World Cup winners, but it was ultimately another loss against a quality opposition for England despite an encouraging performance.

Liverpool’s Lallana struck the post while Spurs’ in-form midfielder Alli saw his one-on-one effort well saved by Marc-Andre ter Stegen as Southgate’s side dominated the opening period, only for Podolski to strike an unstoppable effort past Joe Hart in his final game for Germany to secure the win.

Unsurprisingly, many supporters took to social media to express their views on Wednesday’s encounter, with several England fans encouraged by their side’s impressive display in Dortmund…

Can only be proud of that performance #england

Don't care about the result. Great performance using a system that's rarely been tried before. #England

Thought Alli was excellent & he linked up well with Lallana. His movement is first class. The Germany players didn't know how to pick him up

Lallana & Ali have been excellent! #GERENG

What a player Dele Alli is. Controlled this game tonight. Should've scored a couple but absolutely brilliant. #ENGGER

England take off Dele and Lallana and lose their attacking threat, those two are our main players right now #England

Yet many fans were delighted for Podolski, who scored a stunning goal in his final game for his country, and thus ended his international career with 130 caps and 49 goals for Germany…

Well chuffed for Podolski, great player who deserves that

What a goal! Podolski deserves to score in his final game. Incredible hit! Top bins! #GERENG

Didn't deserve to lose but can do much when your beaten by such a quality strike. Podolski deserves all respect he gets. #GERENG

Ultimately though, it ended in defeat for England, with many fans concerned about the prospect of the ‘same old England’ despite the appointment of a new manager…

#ENGVGER Usual performance by #England = lovely approach play; no end product & a price paid for profligacy in front of goal