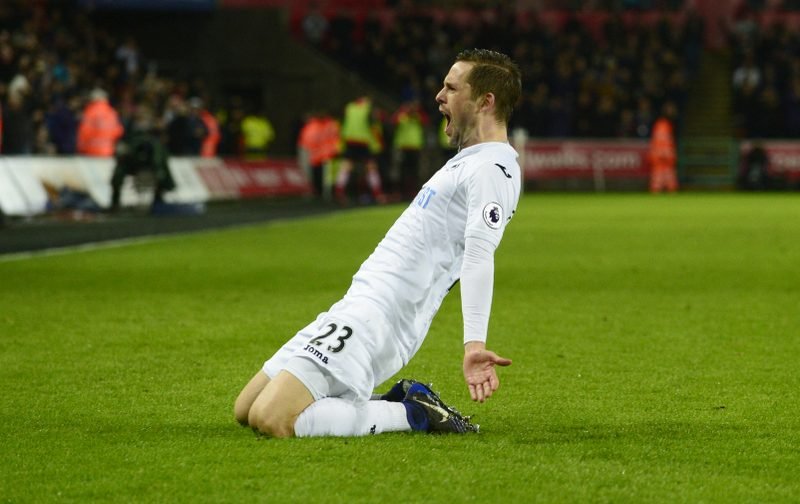 Most of the talk surrounding Everton transfers over the past few weeks has focused on which players are likely to be leaving Goodison Park.

With Ross Barkley and Romelu Lukaku yet to sign a new deal with the club speculation has been rife as to where they’ll be playing next season.

Little time has been spent on which players Ronald Koeman wants to bring in but there’s little doubt the Everton boss will want to add to his squad regardless of whether Barkley and Lukaku depart this summer.

Gylfi Sigurdsson is one player who’s been linked with a move to Everton as Swansea City are unlikely to be able hold on to their star midfielder regardless of whether they avoid relegation or not.

The former Tottenham Hotspur man is enjoying an impressive campaign and proved his worth once more this weekend at Old Trafford with a well taken free kick which earned his side a point against Manchester United.

Everton fans have taken to social media to give their reaction to Sigurdsson’s potential arrival at the club:

Sigurdsson, like Schneiderlin, is a signing that would make so much sense for #EFC. The decisive, creative player the team lacks

@MattJFootball Spurs are an obvious template, I know. But Eriksen is the rug that ties that room together. If Sigurdsson can be 90% of that, I’m in.

@MattJFootball Is Sigurdsson really that creative in open play though Matt? Most of his ‘Moments’ seem to come from a dead ball #EFC

@MattJFootball Barkley wouldn’t get a game if we signed Sigurdsson.. That could be a good thing..

@MattJFootball Gylfi guarantees you 5-10 goals a season from midfield and quality set pieces. Work rate is brilliant as well

@MattJFootball yes all good signing him but what iff he gets injured, we also need like for like in all areas in this team.