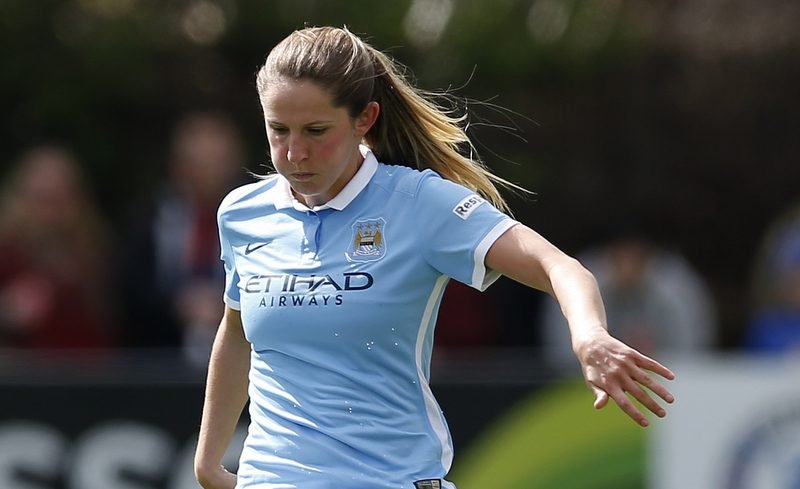 The 24-year-old, who spoke exclusively to Shoot! during Thursday’s ‘Make Dreams Goals’ competition at the Academy Stadium, is hopeful their home semi-final draw against Liverpool Ladies will see The Citizens go one better than last term, where they lost 2-1 (a.e.t) to Chelsea.

“Obviously we were devastated last year, it was something we wanted, to go to Wembley, just like every other club in the competition,” she admitted.

“We will do everything we can in our power. With it being a home leg, I hope the fans come down to support us and they have a special day, obviously being a Bank Holiday Monday.

“Hopefully we can make history again, get to Wembley and put our badge on that trophy.”

Having lifted their first-ever Women’s Super League 1 title back in September, plus triumphed with their second FA WSL Continental Cup just a month later, the centre-half is dreaming of getting her hands on another two pieces of silverware, with Nick Cushing’s side facing Lyon in the semi-finals of the UEFA Champions League later this month.

McManus explained, “It is funny, because the first year we actually were Manchester City Women, we won the Continental Cup and we were the underdogs.

“It was never expected, so winning that the first time around was amazing.

“Then obviously we have gone on to win it again and we obviously won the League as well, now we are no longer the underdogs, it is expected.

“It is [about] trying to be as good as you already are, but still push on and be better, it doesn’t end there just because we won the League title.

“We have never won the FA Cup, never won the Champions League, they are all trophies that every single one of us at Manchester City want to get our hands on.”

The FA’s ‘Make Dreams Goals’ initiative aims to encourage young football fans to share their footballing dreams, before turning a chosen few into reality. Entrants have until Monday, April 17, to submit their dreams with postboxes present on matchday at the Academy Stadium or online at www.thefa.com/makedreamsgoals.