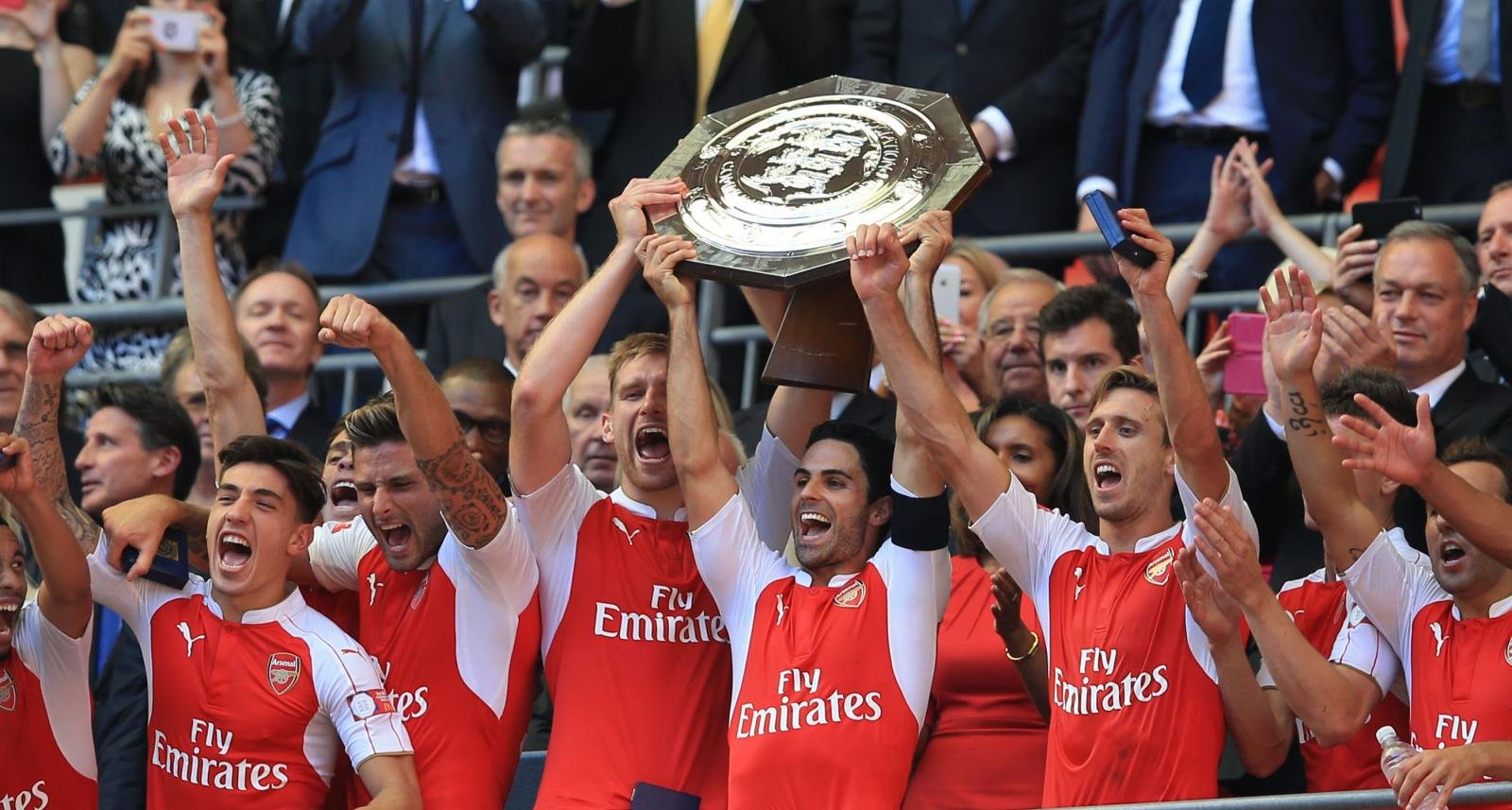 England winger Alex Oxlade-Chamberlain scored the only goal of the game in the first-half, cutting inside on his left foot to unleash a fierce strike into the top corner to help the Gunners lift the first piece of silverware this season.

The Gunners prevailed victorious on their return to Wembley in front of over 85,400 supporters following their FA Cup triumph back in May, giving Arsenal manager Arsene Wenger his first taste of victory over opposite number Jose Mourinho in 14 attempts.

The Frenchman decided to name forward Olivier Giroud on the bench, giving Theo Walcott the chance to impress up front for Arsenal. Meanwhile Petr Cech was handed his first competitive start for Arsenal against his former club after arriving from Chelsea back in June.

As for Chelsea; who came into the game unbeaten in their last eight meetings with the Gunners, left star striker Diego Costa out of the squad, giving Frenchman Loic Remy the opportunity to lead the line, with summer signing Radamel Falcao settling for the bench. Meanwhile Cesc Fabregas, who scored against the Blues for Arsenal in the Community Shield back in 2005, started in the centre of midfield.

Arsenal, who came into this game off the back of lifting the Barclays Asia Trophy and Emirates Cup during pre-season, were perhaps fortunate to not give away a penalty inside nine minutes after Per Mertesacker brought down former Gunner Fabregas in the area.

However, Wenger’s side soon found their stride after the opening 20 minutes as England forward Walcott latched onto Mesut Ozil’s free-kick, only to see his header fly straight into the hands of Blues goalkeeper Thibaut Courtois.

But just two minutes, Walcott’s fellow forward and England teammate Oxlade-Chamberlain broke the deadlock with a vicious strike in the 24th minute – Arsenal’s first goal against Chelsea in over 500 minutes of football.

After Ozil found Walcott in acres of space outside Chelsea’s 18-yard box, the ex-Southampton youth graduate picked out Oxlade-Chamberlain on the right-flank before the 21-year-old cut inside Cesar Azpilicueta to rocket the ball into the top corner.

Just ten minutes later, Ramires wasted two glorious chances to draw the Premier League champions level in quick succession – much to the frustration of boss Mourinho on the touchline.

The Brazilian midfielder first flashed a curling shot just wide of Cech’s left-hand post before remarkably missing the target from a few yards out with a headed effort following Remy’s lofted delivery.

Chelsea nearly paid for their lacklustre finishing shortly after as Aaron Ramsey almost doubled Arsenal’s lead on 38 minutes, only for the Welshmen’s drive to crash into the side netting of Courtois’ goal.

Goalscorer Oxlade-Chamberlain, who only scored three goals in all competitions for the Gunners last season, almost set-up a second for Arsenal on the stroke of half-time by dinking a dangerous ball towards the back post, but thankfully Chelsea captain John Terry was there to save the day with a magnificence clearance.

Perhaps the skippers heroics inspired his teammates to reappear from the interval with a lot more purpose about them as the Blues dominated possession during the opening stages of the second-half, but it wasn’t until the hour-mark until they carved out their next goalscoring opportunity.

Fabregas, who was constantly booed throughout the game by the opposing Arsenal fans, threaded the PFA’s Player of the Year Eden Hazard through on goal, but the Belgian ace got it horribly wrong when it came to the decisive moment, blazing his effort wildly over the bar.

Cech, who played over 330 games for Chelsea, was then called upon to deny his former club when he brilliantly tipped round substitute Oscar’s pinpoint free-kick round the framework in the 69th minute.

Just 60 seconds later; Arsenal ran out a counter-attack with Ramsey eventually laying the ball off to Giroud from 12 yards out, but the former Montpellier hitman fluffed his lines and the ball sailed over the bar.

In similar fashion, Ozil was the next Gunner to run down the right-hand flank to tee up man of the match Oxlade-Chamberlain, but his effort was directed straight at an eagle-eyed Courtois who made a series of good saves to sustain Chelsea’s one goal deficit.

Arsenal’s Ramsey and Santi Cazorla then spurned the game’s final goalscoring opportunity late on as the Welshman played a ball through to the Spaniard, but his shot was parried by Belgian Courtois before Ramsey lashed the rebound into the crowd.

When referee Anthony Taylor blew the final whistle, the red half of Wembley erupted as Arsenal secured their 13th Community Shield title in 21 visits, meanwhile Chelsea suffered their seventh defeat in 11 outings.

However; not all normally bodes well for the Community Shield victors, as the last time a side won the competition and went onto lift the Premier League trophy in the same season was Manchester United back in 2010.

Nonetheless; Wenger’s men will be hoping to defy the odds this campaign and pip Chelsea to their first Premier League title since 2004, starting with next weekend’s curtain opener against West Ham United.

Man of the Match: Alex Oxlade-Chamberlain