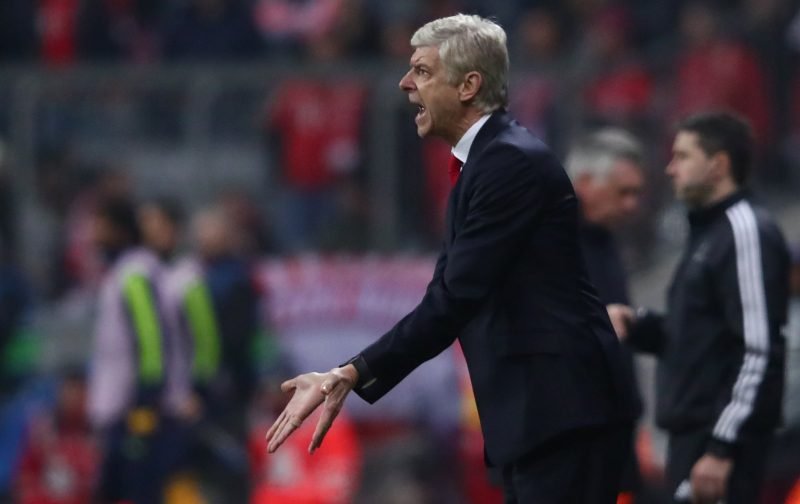 Arsenal were battered 5-1 by German champions Bayern Munich on Wednesday to leave them on the brink of a seventh successive last 16 exit from the Champions League.

Arjen Robben gave Carlo Ancelotti’s side an 11th-minute lead as the hosts dominated the early exchanges, although Arsene Wenger’s Gunners got themselves level when Alexis Sanchez bundled home after the Chilean initially missed his penalty.

Yet, however crucial that away goal seemed at the time wasn’t come the final whistle, as Bayern ran riot in the second half, with a brace from Thiago Alcantara, as well as goals from Robert Lewandowski and Thomas Muller, all but sealing the Bundesliga leaders’ place in the quarter-finals.

It was Arsenal’s second successive 5-1 defeat at the Allianz Arena, having been thumped there in last season’s competition as well, but this was even worse, given that they seemed to completely collapse following the injury to captain Laurent Koscielny at the start of the second half.

It gives Wenger’s men the impossible task of trying to overcome that deficit in the second leg in three weeks’ time, yet there’s another side that also have to come from four goals down if they are to reach the last eight, in the form of Barcelona.

Luis Enrique’s men, who have won the competition three times in the last eight years, were hammered 4-0 by French champions Paris Saint-Germain at the Stade de France on Tuesday, with a brace from Angel di Maria, as well as strikes from Julian Draxler and Edinson Cavani, sealing a memorable victory for Unai Emery’s side.

Unsurprisingly, many supporters took to social media after this week’s games to express their views on what they had seen, with many Arsenal fans embarrassed by their side’s display in Munich on Wednesday…

Well.. That was embarrassing. It's hard to find any positive, we didn't deserve better and we should focus on what happens next #afc

We are an absolute laughing stock once again. So embarrassing. When is the change coming #AFC

That was embarrassing #AFC

I've never been Wenger out. But after tonight he needs to go. He's brought @Arsenal some of their best days & some of their worst #AFC

Wenger's given us some of the greatest times, but it's clear they're over. Time to go, before this is what he's remembered for #afc #FCBvARS

If Wenger isn't capable of changing his ways, he needs to go. Simple as. #AFC

#afc have become a joke. Wenger has to go. What was the tactic for today cause it seems unclear. Half press half hold? Tactically clueless.

If Arsenal can't see now that Wenger has to go then there's something badly wrong. Same mediocrity year after year settling for 4th. #AFC

Barcelona were trounced by PSG, a result which stunned many supporters…

Barcelona absolutely thumped by PSG. What a game.

Barcelona were beaten,battered and bruised by PSG

While the thrashing prompted many to suggest that it was the end of an era at the Nou Camp, although some did feel that that talk was slightly premature…

Mark your calendar, today is the end of the Barcelona golden era.

How's it an end of an era? lol these TV experts are so reactionary. Just a super poor day at the office from Barcelona.

Looks like the end of an era at Barcelona !! Time to rebuild a new team, this will be the sign of a good manager!!Will it be Enrique tho?