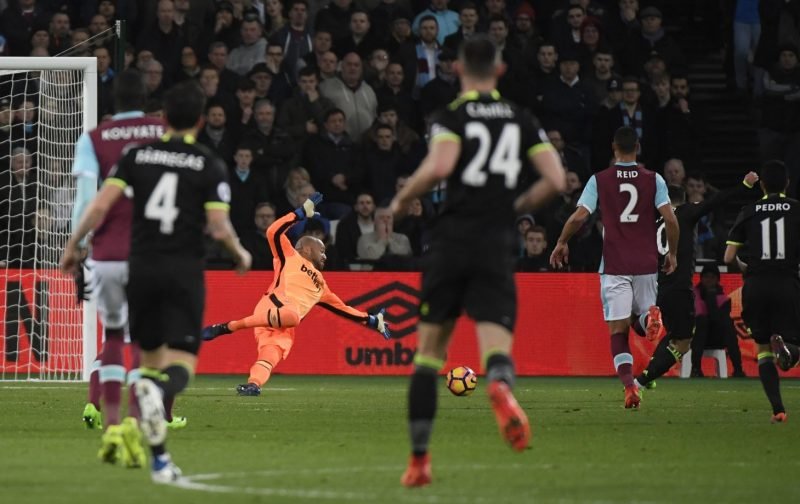 Premier League leaders Chelsea re-established their ten-point lead at the top after beating West Ham 2-1 at the London Stadium on Monday night.

Antonio Conte’s men had seen both Tottenham and Manchester City record victories over the weekend to keep the pressure on the West London club, but goals from Eden Hazard and Diego Costa secured the Blues a 21st league win of the campaign.

Manuel Lanzini’s late reply with nothing more than a consolation for Slaven Bilic’s Hammers, who remain 11th in the table and 11 points clear of the bottom three.

Both sides started well and with a good tempo at the London Stadium, but it took the visitors just 25 minutes to breach the West Ham rear-guard when a clinical counter attack saw Pedro feed Hazard, who coolly slotted round the despairing Darren Randolph.

Striker Costa made it two five minutes into the second half, when he was in the right place at the right time to bundle home Cesc Fabregas’ corner for his 17th Premier League goal of the season.

Argentine Lanzini did pull one back for the hosts in the last minute to give the home faithful hope, yet it was too late and Chelsea saw out the final few seconds to once again go ten points clear at the summit.

Unsurprisingly, many fans took to social media after Monday’s clash to express their views on the contest, with several Chelsea supporters thrilled with another fine display from their side, and some already convinced that they’ll be lifting the Premier League trophy come May…

What a performance, what a game. I can say that we'll win the league.Hazard is world class tonight. Kanté is outta this world #chelsea #CFC

Massive win on the road, tidy performance too! Gap back to 10 #MindTheGap #lovelybubbly #cfc

Solid performance in a difficult fixture. On to the next… #CFC

Classy performance from a classy team. We deserved to be where we are rn, should win the league #CFC

Belgian international Hazard once again stood out, while the sensational N’Golo Kante received much praise after another majestic performance in the Blues midfield…

Man of the match for me was Kante closely followed by Hazard and Moses. Luiz was also excellent. Bring on United in the Cup #CFC

Pretty comfortable win for #Chelsea. Kante and Hazard ran the show tonight. Back to ten point clear at the top. #CFC #WHUCHE #PL

And although their side suffered defeat, West Ham supporters were reasonably satisfied with their team’s display against a top side in Chelsea…

Didn't expect a result against Chelsea but bar a couple of silly mistakes, decent performance from the team. Push on. #COYI #WHUFC

I can live with a 2-1 defeat. We might not have created many chances but I'm relatively pleased with the performance #WHUFC

Well pleased with the West Ham performance tonight and deserved the goal if only we gambled a bit more !! #WHUCHE #WHUFC