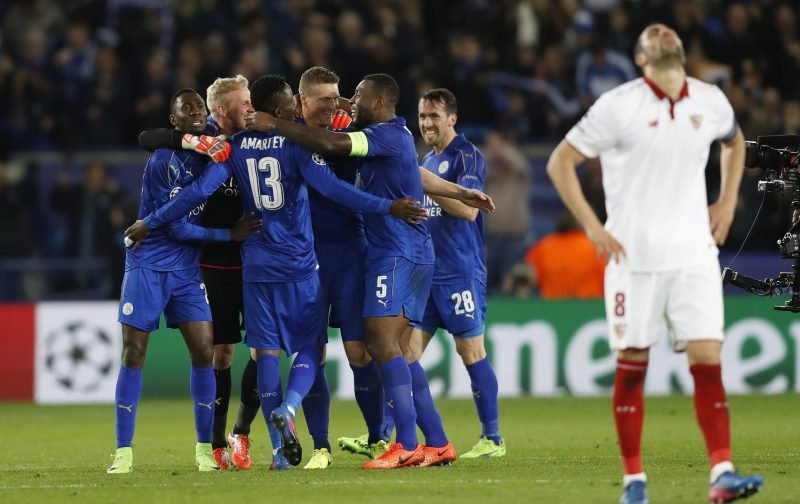 Leicester City progressed to the quarter-finals of the Champions League after sealing a stunning 3-2 aggregate victory over La Liga title hopefuls Sevilla.

The Foxes trailed 2-1 from the first leg in Spain three weeks ago, a result which saw Claudio Ranieri lose his job as manager, but they produced a sensational display at the King Power Stadium on Tuesday night to overturn the deficit and join the likes of Real Madrid and Barcelona in the last eight.

Captain Wes Morgan gave them a first half lead on the night to level the scores, before Marc Albrighton put Craig Shakespeare’s side in the driving seat nine minutes into the second period when he fired home from just inside the penalty box.

The visitors were then reduced to ten men when Samir Nasri received a second yellow card for clashing with Jamie Vardy, although they did get a chance to force extra time late on when Steven N’Zonzi had a spot-kick, only for Kasper Schmeichel to make the save, as he did in the first leg three weeks ago.

Shakespeare’s men held on to a remarkable victory to reach the last eight of the Champions League, and several Leicester supporters took to social media to revel in their side’s unbelievable display against the Spanish outfit on Tuesday…

THE best performance #lcfc have ever produced in their long long history. Absolutely barmy. Absolutely amazing.

What a night at the KP! What a atmosphere! What a performance!
What a result!#lcfc #foxesneverquit

Absolute pandemonium tonight! What a Result! What a performance! It's what dreams are made of! #LCFC

Out of this world. What a performance from the boys! #lcfc

While many Foxes fans gave huge credit to new boss Shakespeare, who has now overseen three straight victories since the sacking of Claudio Ranieri…

Epic performance from #LCFC tonight they were everywhere.Tactically spot on and did a job on 1 of the best eurpoean teams #SEVILLAFC

Quite the artist, this Shakespeare. #LeiSev #LCFC

Goalkeeper Schmeichel rightly received much praise for his display against Sevilla, as did the likes of Christian Fuchs and Wilfried Ndidi…

This is absolutely brilliant from #LCFC … Schmeichel the hero on both legs. #ChampionsLeague

So proud of the entire team after that performance. Can't fault anyone. Kasper really doesn't want to concede at home in the CL. #lcfc

Fairytale stuff for Leicester, joining Spurs and David Moyes in participating in the CL quarter finals more recently than Arsenal