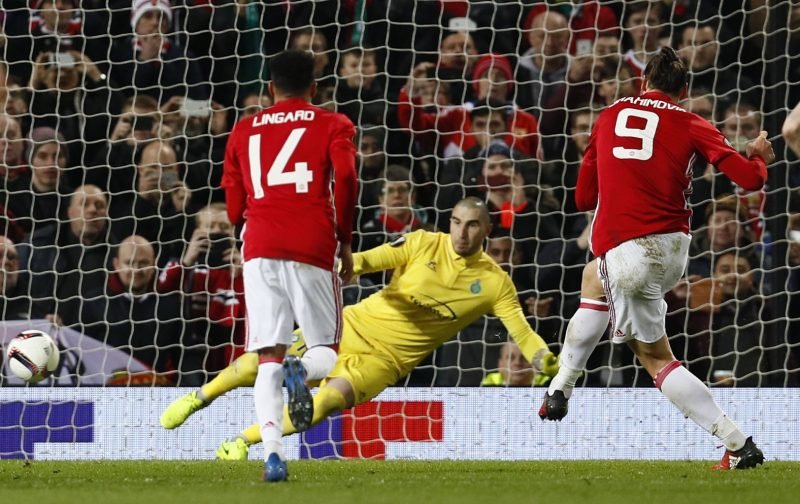 Manchester United cruised to a 3-0 win over Saint-Etienne but Tottenham suffered a surprise defeat in Gent as the Europa League returned on Thursday.

Jose Mourinho’s United, who have the League Cup final to look forward to next Sunday, took the lead after quarter of an hour at Old Trafford when in-form striker Zlatan Ibrahimovic’s free-kick was deflected past the helpless Stephane Ruffier in the visiting goal.

The Swedish star then helped himself to two more goals in the second half as the Red Devils opened up a commanding lead over the French outfit ahead of Wednesday’s return leg at the Stade Geoffroy-Guichard.

While United have given themselves a cushion ahead of the second leg, Mauricio Pochettino’s Tottenham have by contrast got it all to do after meekly going down 1-0 to Belgian outfit Gent, who currently sit eighth in the Belgian top-flight.

The North London side, who lined up with the likes of Harry Kane and Dele Alli in their side, were second-best and well off the pace throughout the contest, and deservedly fell behind when Jeremy Perbet slotted home just before the hour mark.

It means that Spurs will have to respond at Wembley next week, a ground where they lost two of their three Champions League matches earlier this season, if they are to make it through to the last 16.

Unsurprisingly, many supporters took to social media after Thursday’s games to give their views on their team, with several United fans delighted with the result, even if the performance wasn’t quite as good as in recent weeks…

Good performance from #MUFC , solid win and I think we are through. #UEL

Performance wise, Utd a bit below par tonight..but with 3 goals n a clean sheet, shouldn't be a prob to progress to the last 16.. #MUFC

Not a great performance but a great win, another clean sheet. On to the next one#Mufc #GGMU

We need to be more clinical still #MUFC great performance

Ibrahimovic’s hat-trick earned rave reviews from many on Twitter, while several supporters were thrilled to see Anthony Martial back near his best after a turbulent season at Old Trafford…

Ibra.. what a player. 23 goals already when the world wrote him off. Well deserved hat trick yesterday! #mufc

@AnthonyMartial You are just phenomenal mate. Great performance by all standards. #MUFC

ZLATAN WITH THE HAT TRICK what a performance #MUFC #EuropaLeague #Ibra

#ZlatTrick & Martial is back bang in form, solid performance! #MUFC

Tottenham succumbed to a disappointing defeat in Gent, and the performance from Spurs left many supporters angry and embarrassed…

Poor #Spurs performance this evening. I believe the introduction of further youth players with more passion is needed. #COYS

Tottenham that's a disgrace! Got to feel for the fans who go to see a gutless performance like that! #Spurs

Poor performance from Spurs again tonight! Looked like we were playing at half speed! We need some additional players to help us! #spurs

I am a massive #THFC fan but i would rather have Sherwood than Pochettino. Poch is a failure everywhere he goes.

Wow, that was so, so poor. Simply not good enough. Questions have to be asked of Pochettino & Levy again; #Spurs squad is paper thin#THFC

Pochettino must be too soft, he can't seem to motivate these clowns! Lacklustre and have been very lucky at times this season #coys #thfc