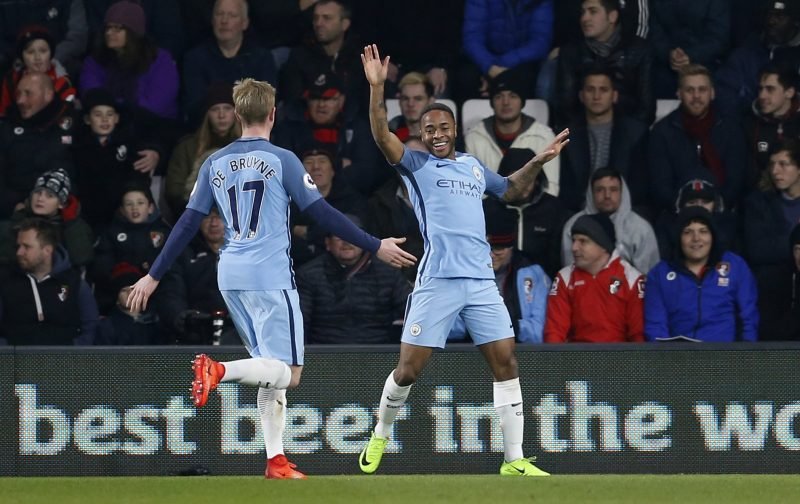 Manchester City moved up to second in the Premier League and to within eight points of leaders Chelsea after beating Bournemouth 2-0 on Monday night.

Pep Guardiola’s side had seen Antonio Conte’s Chelsea draw 1-1 at Burnley on Sunday, so knew that three points on the South Coast would keep them in the hunt for the title.

And they got the win they needed thanks to Raheem Sterling’s first half strike, as well as Tyrone Mings’ unfortunate own goal from Sergio Aguero’s finish midway through the second half.

It was far from easy though for the Citizens, who almost conceded straight after Sterling gave them the lead when Josh King fired home from inside the box, only for referee Neil Swarbrick to rightly disallow it after the Cherries forward pulled John Stones’ shirt back in the build-up.

Harry Arter forced a decent save out of Willy Caballero as Eddie Howe’s side threatened an equaliser, only for City to seal the deal when Aguero’s effort cannoned off Mings past the helpless Artur Boruc.

In what was an entertaining encounter at the Vitality Stadium, many supporters took to social media to express their views on the game, with several City fans delighted with their side’s showing on the South Coast…

Great performance again and up the table we go. #mcfc Up the blues

Another encouraging performance. This team can do it. #mcfc

Good win. Decent performance, I thought Silva was MoM. Sane looking better and better. Quality from sterling also. Made up for Sergio. #mcfc

Many Bournemouth fans were encouraged by their team’s efforts, even if the result was their third league defeat on the spin, and fourth in six since the turn of the year…

Good performance against a top side. Will boost confidence going forward #afcb

Good performance from the lads tonight .. 100% effort given from the 1st minute! Plenty of positives to take into the next game #afcb