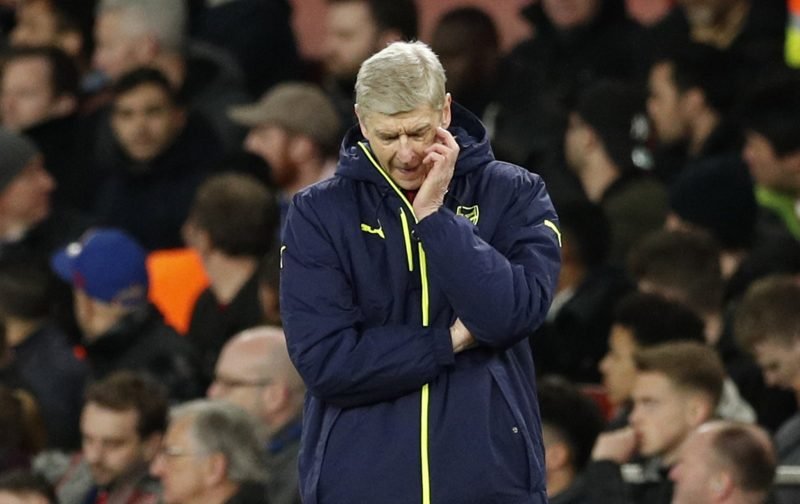 Arsenal crashed out of the Champions League after a second successive 5-1 defeat to Bayern Munich, leaving huge question marks surrounding the future of manager Arsene Wenger.

It is the seventh consecutive season that the Gunners have exited the Champions League at the last 16 stage, and their 10-2 aggregate loss is the heaviest suffered by an English side in Europe’s elite competition.

England forward Theo Walcott gave Wenger’s men a deserved half time lead, yet the whole complexion of the game changed eight minutes into the second period when Laurent Koscielny was given his marching orders.

And then the floodgates opened.

Robert Lewandowski netted the resulting penalty, and further goals from Arjen Robben and Douglas Costa, as well as a brace from the excellent Arturo Vidal, condemned the Gunners to their biggest home defeat in 19 years, and the second worst aggregate defeat in Champions League history, which Bayern also inflicted but on Sporting Lisbon back in 2009 (12-1).

Nonetheless, it was another embarrassing capitulation from the English side, and many Gunners fans took to social media after the game to blast their team’s display on the night, although some did praise the first half efforts…

Absolute disgraceful performance over two legs! 10 goals conceded is an embarrassment. No excuses. Simply not good enough to compete. #AFC

Disgraceful performance from the arsenal over two legs. Will always be the same while the same owners are there #noambition #afc #AFCVFCB

Unsurprisingly, Wenger’s future as manager was once again hot topic on Twitter, with many suggesting that this was the last straw for the under pressure Frenchman…

Every Good story has an Ending! #WengerOUT #afc

The bloke is a disgrace. An utter disgrace. Mugging us fans off week after week. How can anyone still defend him. Disgusted #AFC #wengerout

Wenger says we should have pride in our performance and blames a penalty decision for losing 10-2. The man is deluded. #WengerOUT #AFC

These #AFC players should be ashamed! Wenger doesn't deserve all the criticism thrown about! Shocking performance! No Pride!#UCL #ARSFCB

Everyone firing shots at Wenger but those players are embarrassing. AW takes a share of the blame, but no excuse for players giving up. #AFC

A lot of the blame will be directed at Wenger but how many of those players at #AFC have to take a long hard look in the mirror…?

Actually feel sorry for Wenger, fell apart but completely out of his control on both legs, then we got toy'd with #AFC #Bayern

Wenger and the majority of this Arsenal team just are no where near good enough to play for Arsenal. Another shambolic performance #AFC

And opposing fans took great pleasure in Arsenal’s seventh successive last 16 exit, as well as the manner of their defeat to the German champions over the two legs…

In case any Arsenal fans are wondering what the time is it's ten two. #ChampionsLeague #afc