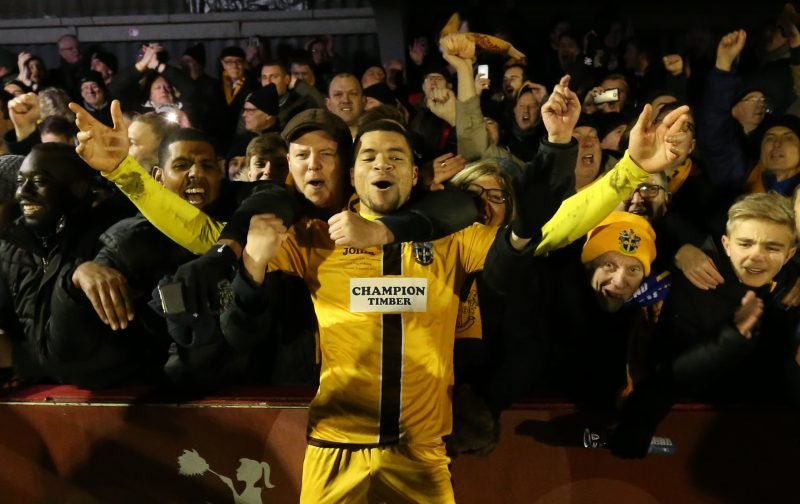 Non-league duo Lincoln City and Sutton United caused the upsets of the FA Cup third round with stunning victories over Football League sides on Tuesday night.

Danny Cowley’s Lincoln drew 2-2 with Championship outfit Ipswich Town a few weeks ago to deservedly force a replay at Sincil Bank, and a late goal from Nathan Arnold last night secured them a 1-0 success over the Tractor Boys, and indeed a place in the last 32 of the competition.

The Imps were sensational throughout and outplayed Mick McCarthy’s men at times, and have thus set up a mouth-watering fourth round tie with Championship high-flyers Brighton in ten days’ time.

The National League leaders are also joined in round four by fellow non-league outfit Sutton United, who came from behind to defeat League One side AFC Wimbledon 3-1 at Kingsmeadow.

Tom Elliot had put the hosts ahead after just ten minutes, but five minutes later Neal Ardley’s men were reduced to ten men when Paul Robinson was given his marching orders for bringing down Matt Tubbs.

And Sutton took full advantage with goals from Roarie Deacon, Maxime Biamou, and Dean Flichett booking their place in the fourth round, and setting up a huge clash with Championship high-flyers and 1972 FA Cup winners Leeds United on January 29.

Elsewhere, Blackpool stunned Championship side Barnsley 2-1 at Oakwell, Bristol City beat Fleetwood Town 1-0, and there were victories for Premier League duo Crystal Palace and Burnley over Bolton and Sunderland respectively.

In what was a wonderful night of FA Cup action, many supporters took to Twitter to express their views on Tuesday’s games, with many highlighting that the magic of the competition is very much alive…

Sutton and Lincoln doing what non-league teams do best #FACup

Sutton United & Lincoln City are great examples of why the Magic is still in the FA Cup. Phenomenal by both of them! #FACup

Unsurprisingly, Lincoln came in for much praise after an excellent performance and result against Ipswich…

Get in the mighty Imps!!!! Great win! #facup #imps #LincolnCityFC

While many Ipswich supporters were unimpressed with their side’s efforts, and some are asking whether time is up for manager McCarthy…

I've always been proud to support #itfc but not tonight. An absolute shambles from management and players alike. #FAcup

Well said Terry Butcher what a pathetic display! Mick you're a decent man it's time to go. We want our Ipswich back #itfc #mickout #FACup