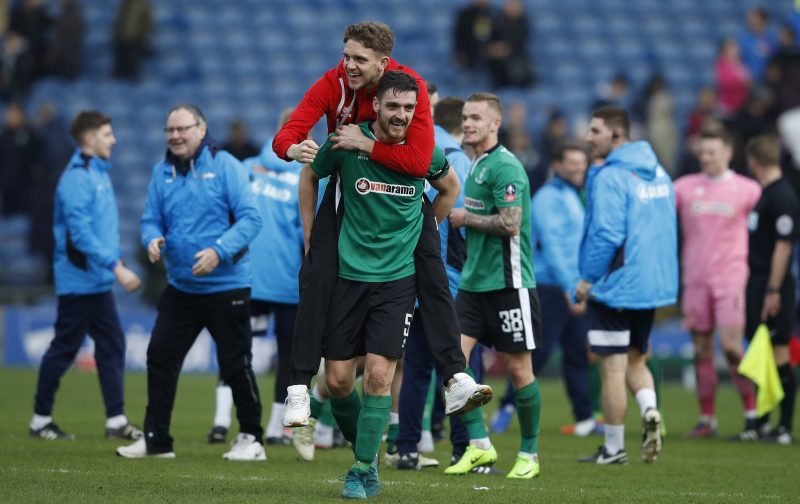 The fifth round clash looked set to be heading towards a replay, only for Sean Raggett to power home a header past Tom Heaton in the final minute of normal time to secure an incredible victory for the Imps, who have now beaten Burnley, Brighton, and Ipswich en route to the last eight.

They are joined in the quarter-finals by League One outfit Millwall, who also scored a late winner to see off Premier League champions Leicester 1-0 at the Den, with the Foxes becoming the third top-flight side to succumb to Neil Harris’ men in the competition this term following Bournemouth and Watford.

Defender Shaun Cummings got the winner in the final minute for the Lions, who played almost the entirety of the second half with ten men after Jake Cooper was sent off for two bookable offences.

Joining both Millwall and Lincoln in the last eight are Tottenham, who comfortably dispatched Fulham 3-0 at Craven Cottage on Sunday, and holders Manchester United, who needed a Zlatan Ibrahimovic header to see off a dogged Blackburn 2-1 at Ewood Park.

Premier League leaders Chelsea won 2-0 at Wolves on Saturday evening, with goals from Pedro and Diego Costa securing their passage through, while Middlesbrough held off a spirited comeback from Oxford United to progress to the quarter-finals, with Cristhian Stuani’s 86th-minute strike enough to secure a 3-2 win over the U’s, who had earlier come back from 2-0 down to level at the Riverside Stadium.

In the weekend’s other tie, Pep Guardiola’s Manchester City couldn’t find a way past Huddersfield at the John Smith’s Stadium, so they’ll have to go again at the Etihad Stadium in the near future, while Monday evening sees the fifth round come to a close when non-league Sutton United look to upset all the odds and knock 12-times winners Arsenal out of the competition at Gander Green Lane.

Unsurprisingly, several fans up and down the country took to social media to express their views on the weekend’s action, and there was only one place to start, with Lincoln’s stunning victory receiving plaudits from many supporters across Twitter…

Today is one of those 'I was there' moments. What a game to witness! Incredible performance from @LincolnCity_FC #imps #Impvasion

What a performance by @LincolnCity_FC. Last eight of the @EmiratesFACup. Am I dreaming? #lcfc #imps

League One side Millwall edged past Leicester 1-0 at the Den, and several Lions fans lauded their side’s heroic efforts on Saturday afternoon…

If ever there was a performance that shows what Millwall Is all about than that was it, Unbelievable passion and desire @Jordan_Archer #Motm

Wow biggest performance from a team you will ever see. Everyman out there is a hero @MillwallFC #MAGICOFTHECUP #FACup #Millwall

In all honesty I didn't expect anything else than that type of performance from #lcfc today. Too many times I think "maybe this week"

Absolutely shocking performance, how can the PL Champions not beat a League One side with 10 men. No way is this acceptable, Ranieri #lcfc

Spurs and United made it through to the quarter-finals, which obviously delighted many fans of those sides…

Not the greatest of performances but at least we got through. @Ibra_official once again with the decider. #MUFC #BLAMNU #FACup

So glad poch picked a strong team today. Nothing was more important than getting that winning feeling back. great performance #coys #thfc

Good win for the lads today. Had the fans on the edge there at times, but managed to pull through. #MUFC

While Manchester City will need a replay to book their spot in the last eight, after a performance some City fans won’t remember fondly at the John Smith’s Stadium…

Disappointing performance to say the least. Pushes the derby back to April at the earliest #MCFC

Monaco on Tuesday too. Need to rinse the stink of that performance off quick and get our minds right for the next challenge. #MCFC