Fans react to an exciting week of Champions League football 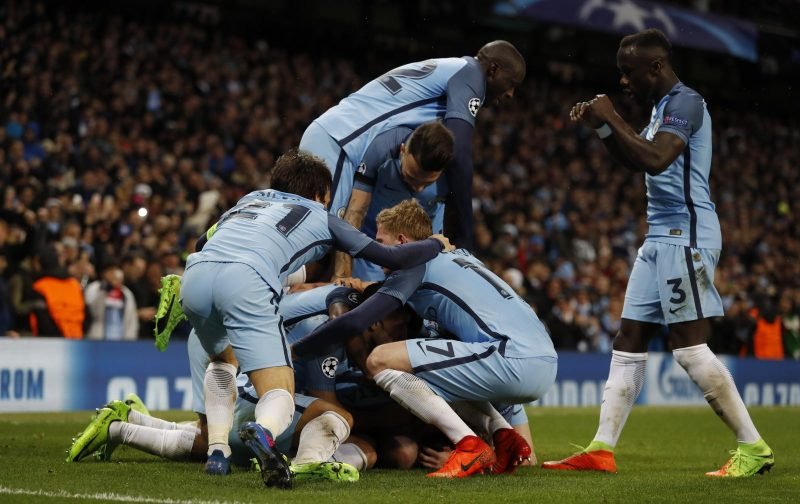 Manchester City will take a two-goal lead to Monaco in a fortnight’s time after overcoming the French side 5-3 in the first leg of their Champions League last 16 tie at the Etihad Stadium on Tuesday.

Pep Guardiola’s side have been in decent form in the last few weeks, but twice found themselves behind to the Ligue 1 leaders, with Radamel Falcao’s exquisite chip the pick of the visitors’ goals.

However, a brace from Sergio Aguero and strikes from Raheem Sterling, John Stones, and Leroy Sane secured the victory for the Citizens, who will head to the Stade Louis II in two weeks’ time confident of reaching the last eight.

While there was victory for City, there was defeat for Premier League champions Leicester, who went down 2-1 at Sevilla on Wednesday night.

The Spanish outfit, currently third in La Liga and just three points behind leaders Real Madrid, saw a penalty well-saved by Foxes goalkeeper Kasper Schmeichel in a first half they dominated, getting their rewards midway through it thanks to Pablo Sarabia’s header.

They doubled their advantage just after the hour mark through Joaquin Correa and looked set to take a healthy lead to the King Power Stadium in a fortnight’s time, only for Jamie Vardy to net a crucial away goal for Claudio Ranieri’s side 17 minutes from the end.

Unsurprisingly, many supporters took to social media to express their views on this week’s games, with many praising Manchester City’s efforts to overcome Monaco in an eight-goal thriller at the Etihad…

What a game! Well done boys great performance, lets work on the defensive side of things! #mcfc

What a game last night #mcfc City haters everywhere must have been gutted… Most exciting Blues performance since 2012 and that game .

Nervous, but beautiful performance! We fight till the end! #cityvmonaco #mcfc

Several fans lauded Aguero’s return to form after his brace, while some also recognised Sterling’s excellent performance on Tuesday night…

In the 2half of the game we saw a lot of goals. What a comeback from #MCFC and incredible performance by @aguerosergiokun #UCL #cityvmonaco

@aguerosergiokun the best striker in the world, absolute class performance from him today! That's how you finish a game! #MCFC

Thought Sterling was our best player over the majority of play alongside top spells from Sane and Aguero. #MCFC

Leicester looked down and out with 20 minutes to go in Seville, yet Vardy’s crucial away goal has given many Foxes supporters renewed hope going into the second leg…

Great second half performance. Got the crucial away goal #lcfc #ChampionsLeague #SevLei

Actually proud of our performance tonight. #lcfc set up to get a counter attack goal, it worked, whilst only conceding 2. Still in it #lcfc

Away goal and decent 2nd half performance away to a team that may well win La Liga this year….oh yes I will take that all day long! #lcfc

I know we lost, but that was the most Leicester performance I've seen in a while. We fought. That's huge. #LCFC

While goalkeeper Schmeichel was lauded for his first half display, with his penalty save one of many stops that kept the Premier League champions in the tie…

Excellent result. Flattering, if nothing else. Schmeichel MOTM. If we can take that second half performance into the PL we might stay up.

Schmeichel's penalty save could be massive come 14th March!

That save by Schmeichel is as good as a goal.