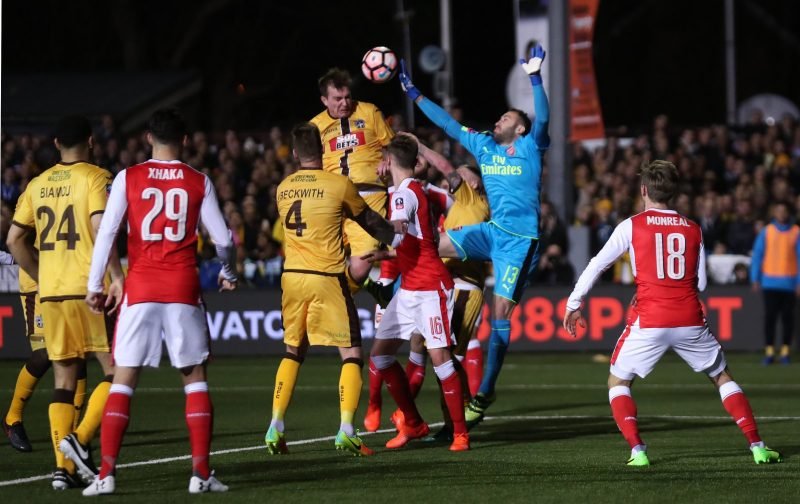 Arsenal ended Sutton United’s sensational FA Cup run with a 2-0 victory in their fifth round clash at Gander Green Lane on Monday night.

Paul Doswell’s non-league side, who currently sit 17th in the National League, knocked out Cheltenham Town, AFC Wimbledon, and Leeds United en route to the last 16, but Arsene Wenger’s Gunners proved too strong in South London on Monday night.

Goals from Lucas Perez and Theo Walcott, the latter’s 100th for the club, secured a reasonably comfortable win for the visitors, who will now go on and face Lincoln City in the last eight, who knocked out Premier League outfit Burnley last weekend.

However, it wasn’t all plain sailing for Wenger’s men on Monday night, as Sutton had their moments, with Adam May going close in the first half, while Jamie Collins headed over from close range and then man-of-the-match Roarie Deacon struck a thunderous effort against the crossbar in the second period.

Nonetheless, the Gunners always had too much for Doswell’s men, whose remarkable cup run comes to an end on a proud evening at Gander Green Lane.

Unsurprisingly, many supporters took to social media to express their views on the game, with Arsenal fans praising their side’s professional display on Monday night…

Professional performance in a match everyone wanted us to lose. Onwards to the QF's #AFC #SUFCvAFC #FACup

Tonight has been a professional performance from the team. We could have been complacent and punished but we got the job done. #afc

Despite Arsenal progressing, Monday evening was all about Sutton, who put in an excellent performance against the Gunners, and on another day could well have netted and made things very interesting in the second half…

Sutton played with passion and confidence tonight. They should be very proud of their performance @suttonunited @Arsenal

Great performance by Sutton Utd & great praise from Arsene Wenger. This is what the Cup is about, come on Lincoln the baton's now yours.

Arsenal go through tonight but all credit goes to Sutton Utd, an amazing performance and fantastic cup run by them

Farewell Sutton United from the FA Cup – they can be proud of their performance and show that you don’t need mega bucks to live the dream!

Sutton's cup run at an end, but heads should be held very high. Fantastic performance tonight & throughout. #facup #suttonunited

Massive congratulations to Sutton United for a fantastic cup run. So proud of them. #suttonunited #facup

Arsenal away in the q/f of the FA Cup confirmed- so looking forward to a great days and one we can win. See you at Ferriby Wenger!! #imps