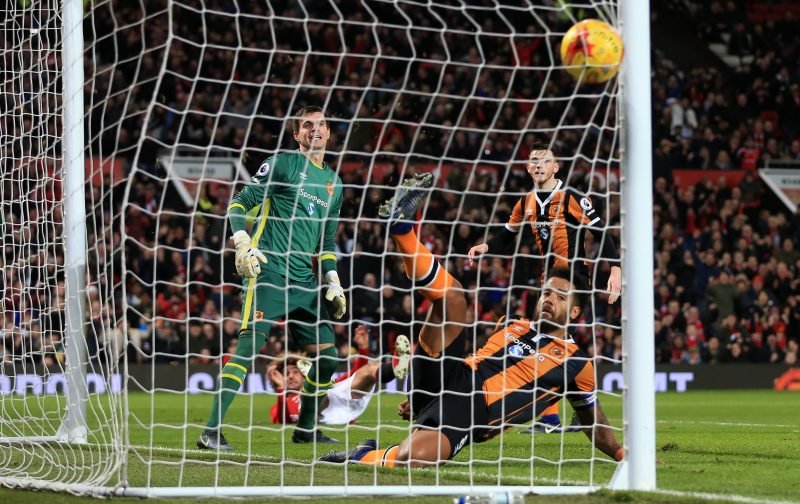 Manchester United made it nine wins in a row in all competitions courtesy of a 2-0 victory over Hull City in the first leg of their League Cup semi-final at Old Trafford.

Jose Mourinho’s men struggled to find a way past a stubborn Hull defence in the first half, but Juan Mata gave the hosts the lead 11 minutes into the second when he finished from Henrikh Mkhitaryan’s header.

The Tigers, in Marco Silva’s second game in charge, defended valiantly with a depleted team, but conceded a second three minutes from time when substitute Marouane Fellaini headed home from an excellent Matteo Darmian cross.

It sealed a comfortable evening for United, and they’ll be confident of getting the job done at the KCOM Stadium in two weeks’ time in a bid to reach a ninth League Cup final.

For Hull, it was a resilient display from Silva’s men, and there are certainly causes to be optimistic ahead of both the second leg and indeed their fight against relegation from the Premier League.

Unsurprisingly, many supporters took to Twitter to express their views on the game, with many United fans more satisfied with the win than their side’s display last night…

Not the best performance tonight @ManUtd but still a good result! Now let's see a big performance on Sunday against Liverpool!! #MUFC

The win was the most crucial part. Not the best performance but a win before the big game is important #mufc

Not a good performance, but a good result nonetheless. Massive 2nd goal by Fellaini, not all the way, but halfway back to Wembley! #MUFC

Not the greatest performance tonight but a 2-0 win will do, onto the big one Sunday #mufc

2nd half performance was a bit better, Pogba motm for me, made some excellent passes, Mata & Mkhi were good too. #MUFC

9 wins in a row #mufc Playing beautiful football, bring on Liverpool on Sunday..

Got the job done tonight. Well played boys! Now onto Liverpool! 9 on the bounce! #MUFC

Could of easily been 5 or 6 tonight but we'll take 2-0 going into the second leg. Roll on Liverpool on Sunday! #MUFC @ManUtd #GGMU #mufclive

Can't argue with that performance, everyone of the players can hold their heads high. #HCAFC

What a superb performance from City. Proud of the boys. Early goal needed in the return leg and you never know. #hcafc

A performance of much character and plenty of potential. And given an asst's flag well, who knows what might have happened… #hcafc

Performance looked decent tonight. Like this brand of football Silva is playing a lot. Suits the team more attacking #hcafc

#hcafc We may only have half a team, but Silva seems pretty good so far.

A performance like that with 1 fit CB, away & against a strong United. looking forward to seeing Silva save our season #HCAFC