Fans react to the draw for the FA Cup quarter-finals 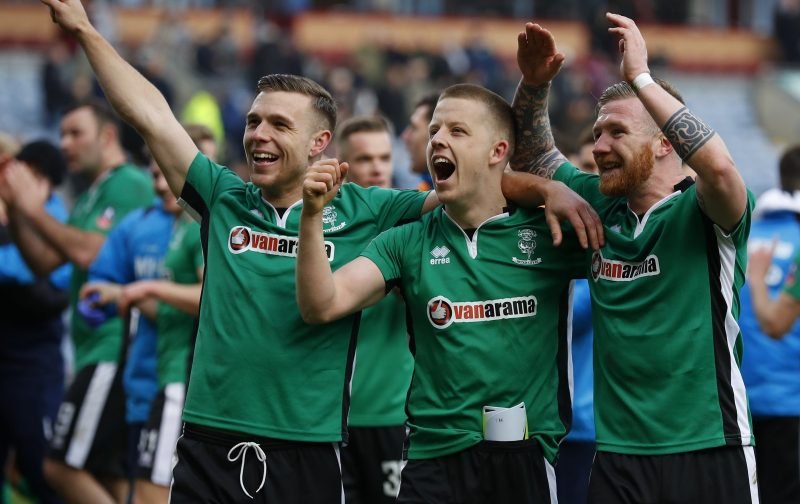 National League leaders Lincoln City will face the winner of this evening’s FA Cup fifth round clash between Sutton United and Arsenal in the quarter-finals of the competition.

Danny Cowley’s men saw off Premier League outfit Burnley 1-0 at Turf Moor on Saturday, Sean Raggett with the late goal, to book their place in the last eight, and they have duly been rewarded with either a trip to fellow non-league outfit Sutton, or English giants Arsenal.

League One side Millwall, the other giant-killers from round five after they got the better of Premier League champions Leicester 1-0 at the Den, will visit Mauricio Pochettino’s Tottenham, who themselves comfortably beat Fulham 3-0 at Craven Cottage.

Aitor Karanka’s Middlesbrough, who held off a spirited fightback from Oxford United on Saturday to progress 3-2, will host either Manchester City or Huddersfield in the quarter-finals after their clash at the John Smith’s Stadium ended goalless.

Yet, arguably the most eye-catching of the last eight ties sees Premier League leaders Chelsea entertain Jose Mourinho’s Manchester United after both sides saw off Championship opposition over the weekend.

Antonio Conte’s Blues eased past Wolves, who beat Liverpool in round four, 2-0 at Molineux, while United had to work slightly harder for their passage into the next round, as they came from behind to defeat Owen Coyle’s Blackburn 2-1 at Ewood Park.

All in all, the draw has set up some very interesting clashes in the last eight, and many fans took to social media afterwards to express their views, with several supporters delighted for Lincoln, who will either go to Arsenal or Sutton in the quarter-finals…

Bottle of wine last night to celebrate the #imps victory. Another bottle tonight for the way the draw went!

Chanting 'Arsene Wenger, we're coming for you!' was a personal highlight of watching the draw at Sincil Bank yesterday. #Imps #FACupdraw

Conte’s runaway league leaders Chelsea will host former boss Mourinho in the next round, a tie met with intrigue from several Blues supporters…

Very interesting draw for us

As tough a draw as possible for Chelsea in #FACupdraw. Luckily a home tie though which will make huge difference. #CFC unbeatable at bridge

Chelsea away: the toughest possible draw, the only team better than us. If we win, incredible confidence.Lose? One less game in April. #mufc

So pumped about the Chelsea draw in the quarters. We are knocking them out. #MUFC

And Neil Harris’ Millwall visit Tottenham, a clash both sets of supporters are looking forward to…

Spurs vs Millwall….
Come on you lions…
Going to be a hard game, Harry Kane is in top form. Wouldn't mind a draw then beat em at Millwall

Happy to draw Millwall in the QF! Whoever Lincoln City gets, I hope they give them a hard fought game.

@SpursOfficial vs Millwall next round great draw for the kids #COYS