Football Foundation: ‘We Only Do Positive’ – The FA announce refresh to Respect campaign 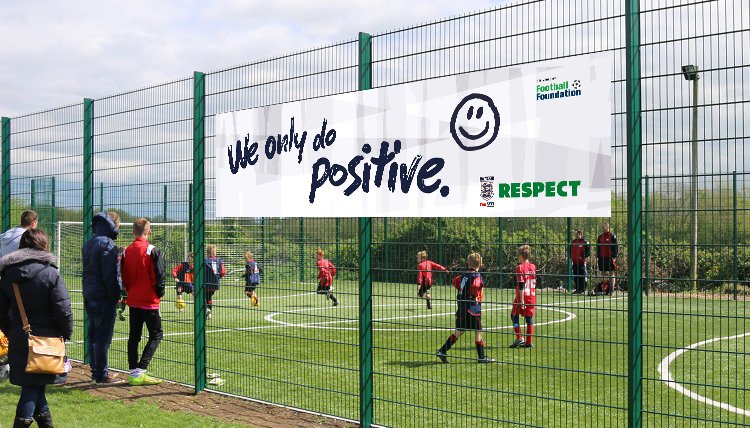 The FA is celebrating ten years since the launch of one of their most important grassroots football campaigns: Respect.

The drive began in 2008 to help promote a more respectful environment for budding young stars to enjoy playing football in.

The campaign has aimed to make the nation’s favourite game accessible to people from all types of backgrounds and make people more aware of how their behaviour can impact on people’s enjoyment of football.

As part of this, The FA have worked with the Football Foundation to give clubs and leagues the chance to redeem vouchers that pay towards respect packs, which contain equipment to help promote a more respectful atmosphere at matches. These include touchline barriers, attention boards, wall banners and captain’s armbands.

These packs have helped to promote a great deal of positive changes, with nine out of ten clubs reporting that they had benefitted from the equipment, and players suggesting that the environment they played football in was much more comfortable.

One club in particular that’s benefitted from the respect packs is Newport Pagnell Town FC.

The club witnessed a big improvement in behaviour from spectators after putting up Respect banners and signage at their home ground in Buckinghamshire.

The club then decided to build on this even further by creating their own refereeing talent pathway to help their youth footballers to develop their skills as match officials.

Julie Ford, the club’s press officer, said, “The Respect signage made an instantaneous difference to the standards of behaviour demonstrated by supporters and spectators.

“Previously we had people venturing around the pitch almost at will and while it maybe took a couple of weeks for people to take proper notice of them, the standard of behaviour has been exemplary ever since.”

However, after discovering that only a third of people in England are aware of the Respect campaign, The FA are pushing ahead with a brand refresh for the tenth anniversary.

The new campaign ‘We Only Do Positive’ will specifically focus on the behaviours of parents and coaches.

Nathan French, The FA’s National Respect project manager,explained, “We have so many fantastic clubs, leagues and volunteers across the country, who work hard to create positive match day environments for their players.

“However through the research we’ve carried out, we’re very aware that we have some work to do in ensuring a consistent and positive experience for all.

“The new campaign will focus on adults within mini-soccer and youth football playing their part to create positive experiences both on and off the pitch for the players.

“We have a number of new activations which will help bring longevity to the campaign throughout the season.” 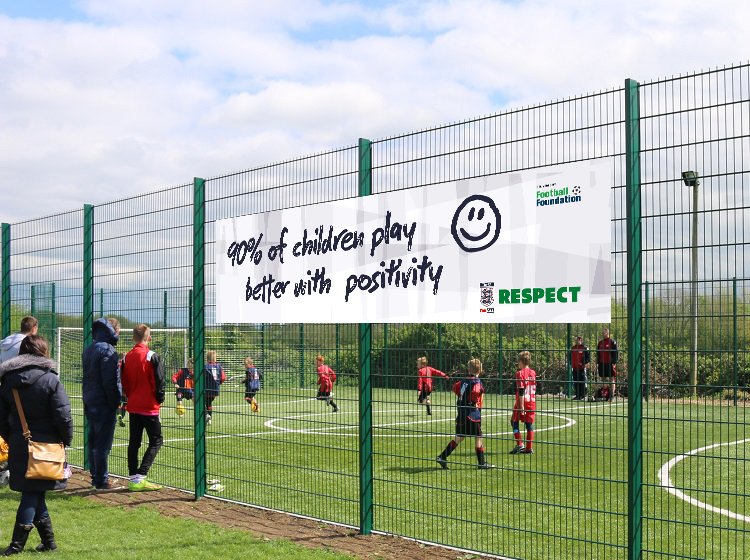 The new-look Respect campaign now sees a clear focus placed on the importance of positivity on the performance of grassroots footballers.

New banners will be embossed with positively reinforced messaging and the campaign logo, itself, has also undergone a facelift, with the cautionary red respect symbol replaced with a progressive and hopeful green.

French believes this new positive outlook will help to spark even greater change in attitudes.

“Ultimately, positivity breeds positivity and the more we can promote it as a fundamental aspect of the game, the better the experience will be all round for individuals involved in the sport,” he added.

The match day equipment part of the campaign will be delivered by the Football Foundation, the charity funded by the Premier League, The FA and the Government, via Sport England.

Clubs, leagues and schools will once again be given the opportunity to apply for substantial vouchers to help towards the purchase of equipment to aid the respect levels in grassroots football. To find out more information, go to www.footballfoundation.org.uk/funding-schemes/respect/.