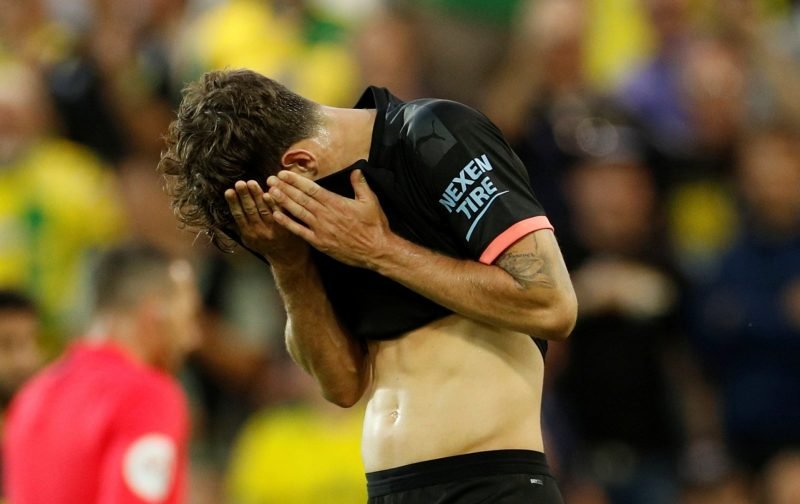 Manchester City suffered a shock 3-2 defeat at newly promoted Norwich City at the weekend to leave them five points adrift of Liverpool at the top of the Premier League.

In what was a rare poor performance from the champions, defensive errors cost the Cityzens from extending their unbeaten start to the campaign.

Much of the blame has been laid at the centre-back partnership of Nicolas Otamendi and John Stones.

The Argentine and Englishman are currently Pep Guardiola’s only fit centre-backs due to an injury to Aymeric Laporte and Vincent Kompany’s summer exit.

And former Manchester United defender Gary Neville has said that City will not defend their crown if the duo continue to perform like they did at Carrow Road.

“Guardiola gave up on this partnership 18 months ago when Laporte came to the club,” the eight-time Premier League winner said on Sky Sports’ Monday Night Football.

“Otamendi always gets caught out as a centre-back and quickens up the opposition in attack. He’s so not a Pep Guardiola type centre-back, they’re usually composed but he’s rash.

“Sir Alex Ferguson at times during his Manchester United career would see a game too far with players and say, ‘that’s it, you’re done’. Manchester City’s 4-3 defeat at Liverpool in 2018 was the game when Guardiola decided that Stones and Otamendi couldn’t play together.

“Laporte’s injury, Vincent Kompany leaving and not replacing him is a big problem for Manchester City. Stones and Otamendi have played 25 games under Guardiola in the Premier League.

“That will cost Manchester City the Premier League title.

“If these two play together at their current rate of performance they won’t win the league.”

Laporte, who was named in the 2018/19 PFA Team of the Year, will be out until January at least after injuring his right knee in the 4-0 win over Brighton.