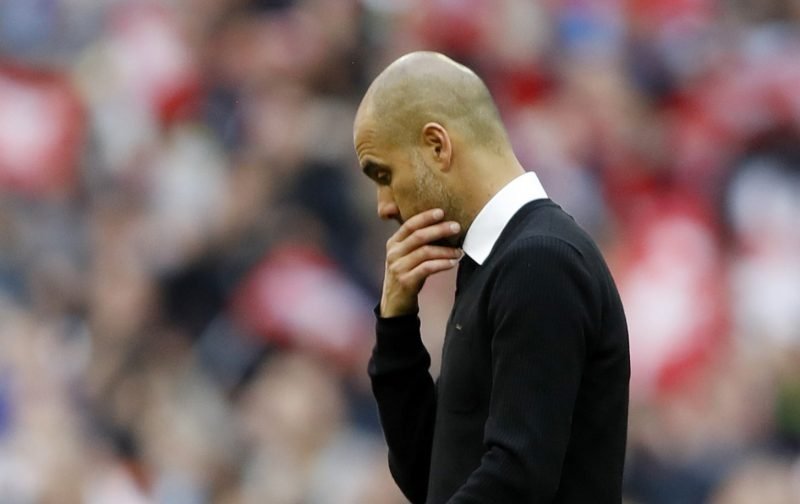 Manchester City manager Pep Guardiola insists his side will be ‘strong’ next season after seeing their last chance of silverware vanish at Wembley on Sunday.

The Citizens were beaten 2-1 by Arsene Wenger’s Arsenal in the semi-finals of the FA Cup, which means that former Barcelona and Bayern Munich boss Guardiola is set to endure his first trophyless season as a manager.

Sergio Aguero had put a dominant City in front just after the hour, but an equaliser from Nacho Monreal nine minutes later forced extra time, from which Gunners forward Alexis Sanchez netted what turned out to be the winner after 101 minutes.

Nonetheless, Guardiola lauded a ‘good performance’ from his side, and is convinced that his team will be better next season.

He said in his post-match press conference: ‘We made a good performance, we did absolutely everything to play, so it’s congratulations to Arsenal.

‘We will improve next season, we will be stronger.

‘It [the game] was similar like what happened this season. The team doesn’t need to do a lot of things to score goals, we have some problems to score but we play like we want.’

Scoring goals certainly appears to be an issue given that City dominated possession and territory for large periods at Wembley on Sunday, albeit didn’t create too many opportunities from it.

Nevertheless, Guardiola and his side must regroup as they have six Premier League games remaining to clinch a top four spot, starting with the Manchester derby at the Etihad Stadium against Jose Mourinho’s fifth place United on Thursday.