“I felt famous,” Aston Villa’s Merrick is ‘Up for the Cup!’ 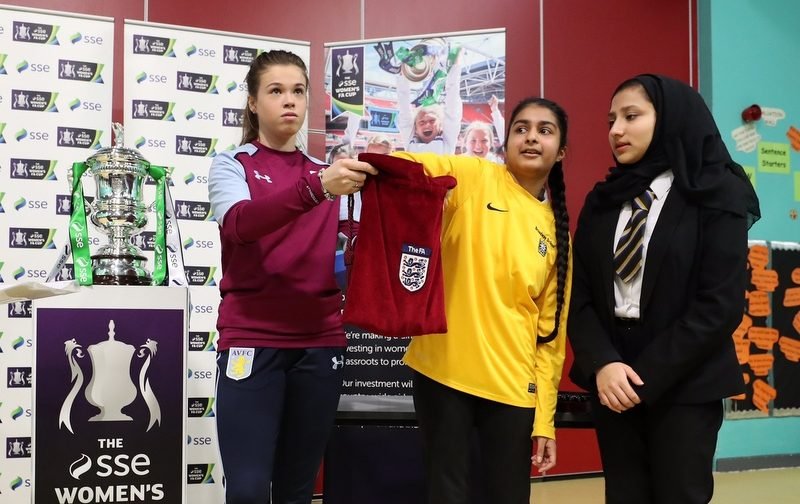 When the Women’s FA Cup draw was made on Monday, two schoolgirls in Birmingham might have had the responsibility of deciding the ties – but they did it under the watchful eye of Aston Villa’s Beth Merrick.

The interest in the draw was high, and Merrick was much in demand.

“There were so many people there!” she said.

She saw Broadway Academy’s Sana Kazi, 14, and Leya Hussain, 16, pick out a home tie for Villa against Cambridge United.

“We quite like playing away – it’s nice to travel with your team,” she added.

“But in terms of getting people to the game and trying to intimidate the opposition with your fans, it’s nice to have a home tie and start our season off right.”

The third round is where the WSL2 sides join the competition – and it comes before they start their interim Spring Series, filling the gap before reverting to the winter football season for 2017-18.

As such, there’s always the risk of an upset against a WPL side coming into peak form for the run-in.

“You never know what can happen,” Merrick said.

“They’re in season. They’ve got their flow of games whereas we’ll only have a couple of friendlies under our belts. It’ll be a tough time for the Super League teams.”

Merrick is looking forward to getting back to action, though, after the lengthy 2016 season with its enforced breaks.

“Training is just not the same as playing games on the weekend,” she admitted.

“Our aim for last season was promotion, and it went no way how we expected it to or wanted it to.

“This year, the Spring Series will be a building block towards the winter league and ensuring that we get towards a promotion spot. A club of our stature – we’ve got a lot to live up to.”