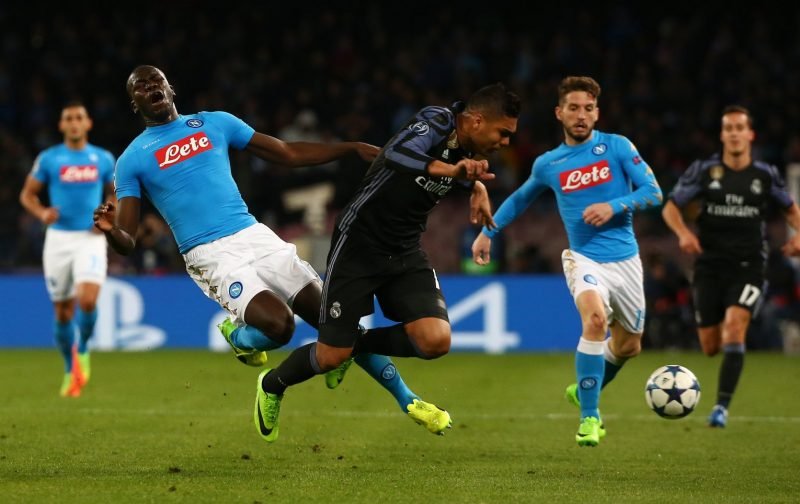 The agent of Napoli defender Kalidou Koulibaly has refused to rule out his man moving to Premier League leaders Chelsea in the summer, reports The Daily Star.

The 25-year-old centre-back has started 21 of his side’s 30 Serie A games this season, helping his team keep eight clean sheets, and pick up 13 victories to power them to third place in the table, just four points adrift of Roma in second.

Koulibaly, capped 11 times by Senegal, was linked with a move to Stamford Bridge last summer but no move materialised, but that doesn’t mean that he won’t make the move to West London this time round.

His agent said: ‘Chelsea were interested but then they signed David Luiz and you also have John Terry and Gary Cahill at the club so there is a lot of competition there.

‘So we will see what happens.

‘Whatever happens in the future will depend on the president [Aurelio De Laurentiis] and whether or not he decides to evaluate any offers that may come in.’

And with Chelsea boss Antonio Conte likely on the look out for defensive reinforcements ahead of next season’s expected title defence and Champions League campaign, he may well reignite his interest in one of the most highly-rated defenders in Italian football.

Captain John Terry is expected to leave the club this summer after struggling for regular football, and with the back three of David Luiz, Cesar Azpilicueta, and Gary Cahill likely to have to play more games next term, having reinforcements in the defensive position is vital.

And there’s little doubt that Koulibaly, who has played 91 times for Napoli, would be an excellent addition to an already talented pool of defenders at Stamford Bridge.