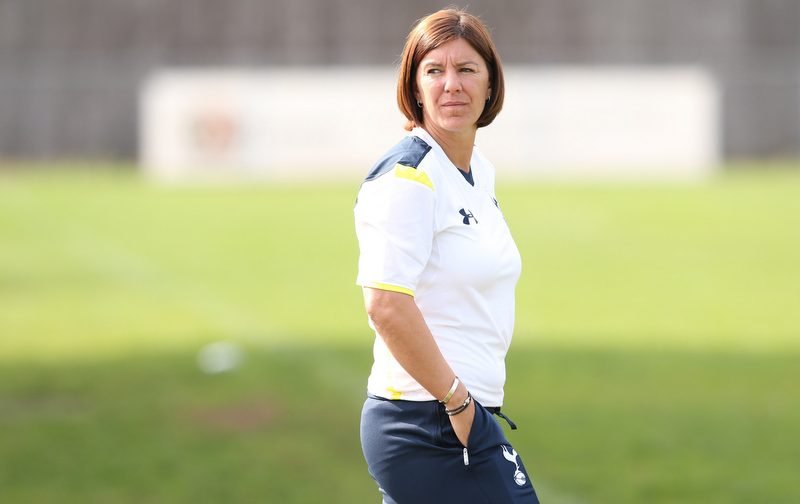 Triumphant Tottenham boss Karen Hills was thrilled after her unbeaten side lifted the FA Women’s Premier League Southern Division trophy at White Hart Lane, and warned there is much more to come from them.

Spurs still have the Capital Cup Final and the Women’s Premier League Cup Final to come, both against Charlton Athletic, and at the end of May they will play off against Blackburn Rovers, the WPL Northern Division champions, to see who will be promoted to the Women’s Super League.

Hills admitted that her team had looked a little nervous under the White Hart Lane floodlights at first as they took on relegation-threatened West Ham United, but she was always confident they would settle into the big occasion.

“It was never a done deal,” she said to Shoot!

“We always take one game at a time – and we knew they were fighting against relegation as well, so they have things to play for.

“It took us time to get warmed up, but once we got into our stride, that goal settled us a little bit.

“We weren’t overly happy with our first-half performance because we knew we could have done better, but credit to West Ham, they put in the effort, they challenged and pushed us.”

Hills picked up her medal as her captain Jenna Schillaci lifted the trophy, and although she joined in the celebrations, she was already thinking about the next match.

“We are happy to win the league, but there are still things to be achieved,” she added.

“This team, the way they are playing and the performances they are putting in, anything is possible.

“We’re going to take each game as it comes, we’re going to continue training really, really hard, and we’re looking forward to playing the rest of the league games, give some of the other players a run-out, and at the same time build for those cup finals as well as the big one – the play-off at the end of May.”