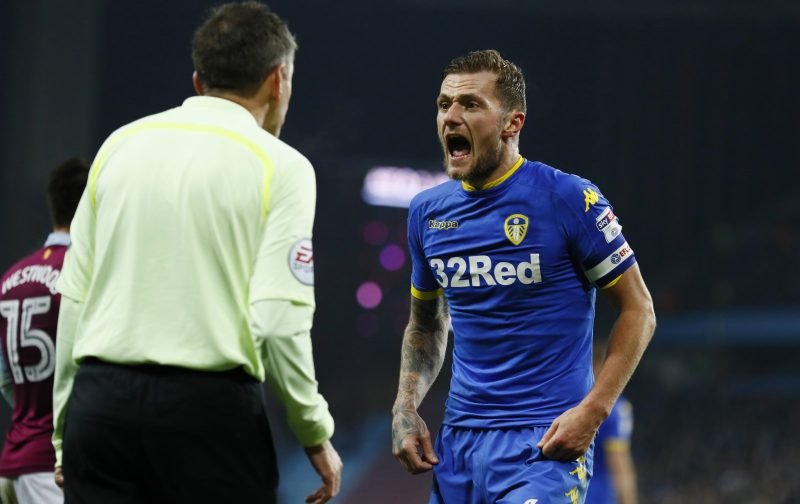 Leeds United defender Liam Cooper has today been given a six-match ban by the FA after he was charged with violent conduct in his side’s 1-0 defeat to Reading on Saturday.

The 25-year-old stood on Royals defender Reece Oxford in the second half of their top-of-the-table clash at the Madejski Stadium, a game which Jaap Stam’s side won in the first period thanks to Yann Kermorgant’s fine strike.

The match officials did not see the incident at the time, but the FA have today confirmed that the Leeds centre-back will serve a six-game suspension, which includes the one-match ban a player automatically receives for their second dismissal of the season.

Cooper was sent off back in their FA Cup fourth round defeat to Sutton United in January, and will now miss a crucial part of Leeds’ season as they look to secure a place in the Championship play-off places.

Garry Monk’s side lost 2-0 at Brentford last night, the first of Cooper’s six games on the sideline, although they remain fifth in the division and five points clear of seventh place Fulham.

Unsurprisingly, many Leeds fans took to Twitter earlier today to vent their frustration at the FA, especially given that Reading’s Tyler Blackett was not charged with an elbow on Chris Wood during Saturday’s clash in Berkshire…

On a whole, Cooper deserves the 6 game ban. But compared to what Blackett did and got away with it, it's a joke. #lufc

Surprise surprise, Cooper gets the book thrown at him. I'm sure the FA would love to dock points from Leeds. #mot #lufc

@FA Absolute joke. How can you also not see that Blackett clearly elbowed Wood. Premeditated considering the anti-Wood build up from Reading

@FA Surprised.. Not in the slightest. Only surprise is we didn't get docked a few points.

@FA And Blackett gets nothing. What an absolute joke you lot are. Any other club and it would be half that.

However, some Whites supporters were more understandable about the decision…

Cooper at the end of the day he stamped on someones head. If that was one of our players we'd be wanting a life ban #lufc

Going to be completely honest, some #LUFC fans won't like it, but oh well! IF someone had done what Liam Cooper done to one of our players