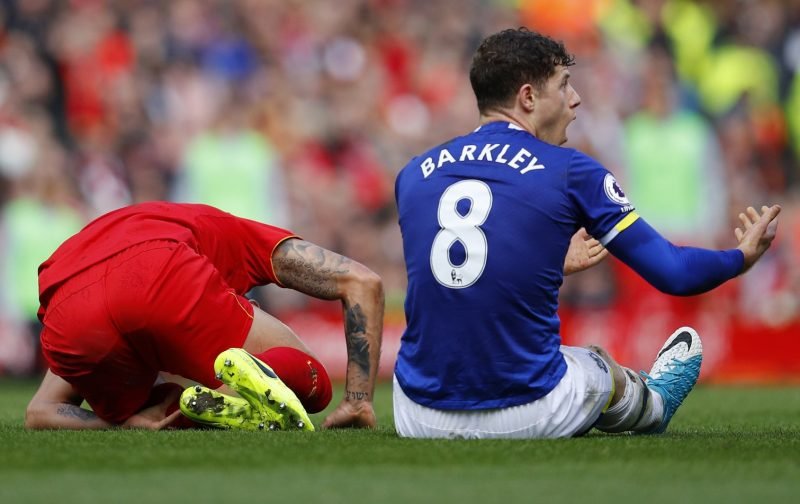 Jurgen Klopp’s Liverpool got the better of bitter rivals Everton 3-1 at Anfield in the 228th Merseyside derby earlier today.

The Reds took an early lead through Sadio Mane, who later went off injured, although were pegged back by Ronald Koeman’s Toffees when Matthew Pennington stabbed home an equaliser after 28 minutes.

However, the visitors weren’t level for long, as a wonderful Philippe Coutinho strike restored the home side’s advantage, before substitute Divock Origi gave Liverpool a two-goal lead on the hour mark.

In what was an entertaining and enthralling derby at Anfield, there was a few controversial moments over the course of the 90 minutes, none more so than Ross Barkley’s awful challenge on Liverpool centre-back Dejan Lovren, which arguably warranted harsher punishment than the yellow card given by Anthony Taylor.

At least that’s how Reds fans on Twitter saw it…

How on earth did Barkley not get red card for that horrendous tackle?

Barkley should be off. Disgraceful tackle that #LFC

Barkley did same on Hendo in the first meeting. Red card

There should be a personalised red card specially for Barkley #LfcEve

Anthony Taylor had just turned his head to follow the ball, missed full extent of Barkley follow through on Lovren. Clear red card.

Everton should be down to 9 men. Williams should be off. Barkley should get straight red or two yellows. Take your pick.