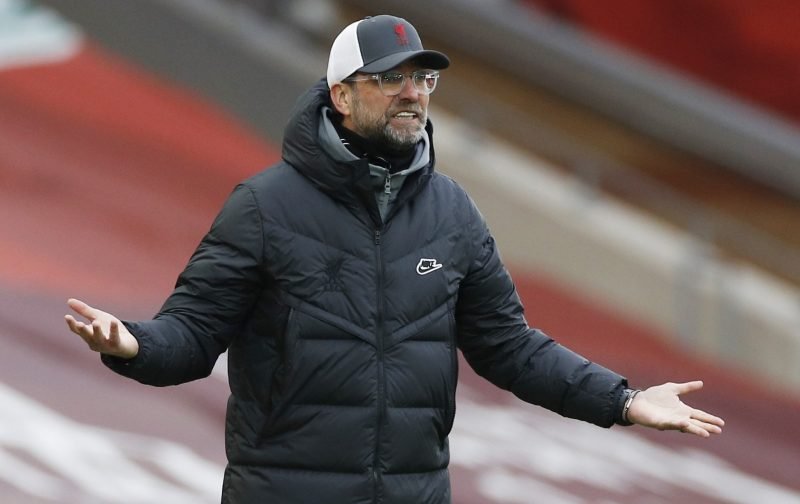 Liverpool’s helpless home form continued at the weekend as the Reds slumped to a 1-0 defeat against relegation-threatened Fulham at Anfield.

The result marked Liverpool’s sixth straight home Premier League defeat, a staggering statistic considering Jurgen Klopp’s side were previously last beaten in the top-flight at home back in April 2017.

Wednesday’s Champions League tie against RB Leipzig technically presents an opportunity for the Reds to stop the rot, although the game isn’t actually being played at Anfield.

Due to current Coronavirus restrictions in the UK, the match, will instead be played in Budapest, Hungary.

Klopp’s side take a healthy 2-0 first-leg aggregate lead with them to the Puskas Arena thanks to goals from Mohamed Salah and Sadio Mane three weeks ago.

If they can get the job done and progress to the last-eight, the finalists of 2018 and winners of 2019, will reach the quarter-finals for the eighth time since the tournament was rebranded in 1992.

The Brazilian has come under fire for his form of late, after making a handful of uncharacteristic mistakes. The club’s number one is expected to start again in goal though, as the Reds look to keep Leipzig’s attack at bay.

One of a number of starters dropped for the defeat against Fulham, Alexander-Arnold will likely return to the starting eleven in place of young full-back Neco Williams.

The midfielder has been used as a makeshift centre-back for the majority of this season due to injuries to both Joe Gomez and Virgil van Dijk, and should start in defence once more.

The young defender was one of the players brought in to face Fulham, and may be given the chance to continue with injuries still plaguing the Reds’ backline.

The only member of the back-four from the defeat against Chelsea to survive for the Fulham game, Robertson will start at left-back again as Liverpool look to protect their first-leg advantage.

The Spanish midfielder came under fire for his early performances in a Liverpool shirt, but has looked somewhere close to being back to his best more recently, and should start as Liverpool look to dominate the midfield in Hungary.

Thiago dropped to the bench for the defeat to Fulham.

Jones was one of the players dropped to the bench against Fulham, but could expect to return to the starting eleven as Klopp looks for a response from his side.

Arguably Liverpool’s player of the season by default if nothing else, Wijnaldum started last time out and should again keep his place for his tirelessness in midfield.

The Egyptian may be the Premier League’s top scorer, but Salah is now without a goal at home since early February. He may see this as an opportunity to find his shooting boots if Leipzig apply pressure and Liverpool are given the room to counter.

The Senegalese forward was dropped against Fulham in place of Diogo Jota, but is expected to return to the starting eleven as Klopp’s side look to counter at their best.

The Brazilian isn’t having his best season at Liverpool, but will likely start on Wednesday evening as Klopp will likely select his full strength eleven in a bid to secure progress to the next round.